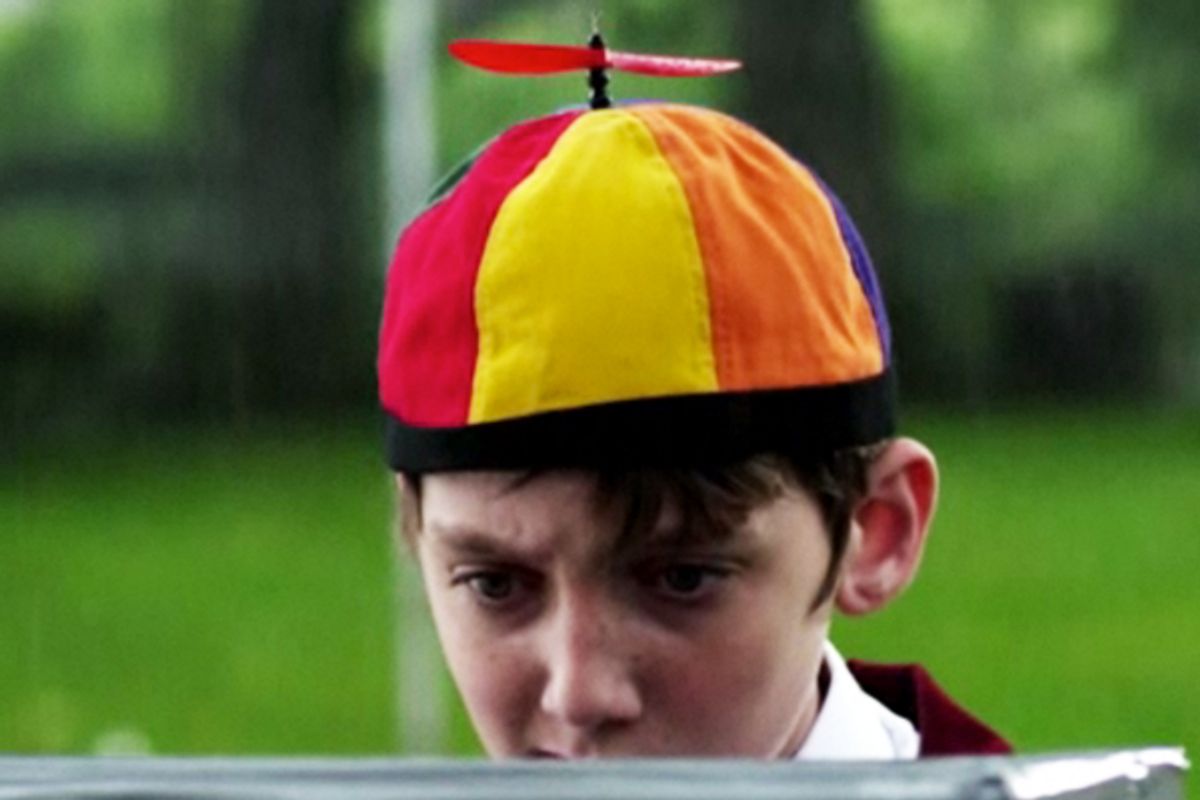 Combine the Decemberists and David Foster Wallace -- as "Parks and Recreation" co-creator Michael Schur did in a new video for the band's "Calamity Song" -- and it's catnip for the McSweeney's set. Schur and the band brought to life a game from the book called Eschaton -- which is part tennis and part "War Games" -- in a brightly colored and crisply shot video.

What would David Foster Wallace think? We asked David Lipsky, who spent five days on the road with the late author during his book tour for "Infinite Jest" for a Rolling Stone profile. After Wallace's death, the article became the basis for his book "Although Of Course You End Up Becoming Your Self: A Road Trip With David Foster Wallace." And judging by Wallace's fondness for R.E.M., it's easy to imagine that he would have liked the jangly "Calamity Song" even before the Decemberists tribute to Eschaton.

Had you imagined what Eschaton would look like, and how close did the vision in the video come to your sense of the game? What caught your imagination most about the video?

It's impossible to read the Eschaton scene and not shoot some mental footage yourself. The video is pretty much exactly what you imagine, best-case; the crisp colors, the propellor beanie, the youth of the kids on court, which somehow never comes through when you're reading about high schoolers. You read them as if they're you with a tighter curfew; you forget they're walking around in tiny adolescent form. What made me smile most -- aside from the sight of Otis P. Lord at his terminal -- was seeing Colin Meloy really sportily wearing Pemulis' yachting cap. And the Enfield Academy gear, I have to say, excited my consumer response. Note to Michael Schur: Please sell T-shirts. The red and gray, as Wallace anticipated, look really splendid together.

You spent days in the car with David Foster Wallace -- what did you listen to? Any sense of what he might have made of either the Decemberists or this video?

We talked in the car, and when we weren't it was R.E.M.'s album "Monster," a lot of replays of the song "Strange Currencies" -- guitar-heavy, and not so different from the Decemberists. At his house, he played me a Brian Eno song, "The Big Ship," to show how close it was to the Bush song "Glycerine," which he'd taped off the radio. (This was an analog time.) He said he'd grown up listening to "an enormous amount of Pink Floyd." He really loved Alanis Morisette's "You Oughta Know" -- he laughed and said, "I have the musical tastes of a 13-year old girl." Then he said a typically lovely thing: that Alanis was unlike lots of other celebrities, in that she was realistically sloppy; with the others, "You can't imagine them putting a quarter in a parking meter or eating a bologna sandwich." I don't really know how he might have felt about the Decemberists, but they are bologna-imagination friendly. And I had the impression he loved movies, well-shot ones, and so my sense is it might have been a treat to see his complicated game treated so well, so gorgeously worked out: That flattery filmed versions pay to a written work. Catering trucks, lights, wardrobe, sound people, actors, musicians, directors, all marshalled because you imagined something so compellingly. A kind of stunning compliment, a movie: You imagined something so well we are going to make it temporarily real.

And lastly, it was directed by Michael Schur, the co-creator of "Parks and Recreation," who also holds the film rights to "Infinite Jest." Does the video give you any insight into what a possible movie adaptation would look like?

Schur did a very lovely job -- beautifully framed, high gloss and intelligent, and with that feeling of the youth of the kids, the energy that gets directed in very specific places until it pools and builds and spills over, which is just how high school feels. It gave me a very strong sense of the novel, with something I'd forgotten -- youth, seasons, weather, asphalt, all the side stuff that your brain approximates while reading a book, even one as completely rendered as Wallace's. It reminded me that movies have that advantage: of time, of things actually moving, of all the footage shot. As a reader, it made Wallace's world feel very real, and made me think Schur would do extraordinary work with a filmed version -- though, as he told the New York Times about show-running Adam Scott and Amy Poehler, "I like my current job a lot."

What David said about any movie version was that it would be a hard book to film, "Unless it's like one of these 48-hour Warholian, bring-a-catheter-to-the-theater experimental things." The impression the video left this reader with is that it wouldn't: it's filled with an incredible amount of life.