The fruits of elite immunity

The former V.P. prepares to be feted and enriched for his crimes rather than investigated and indicted 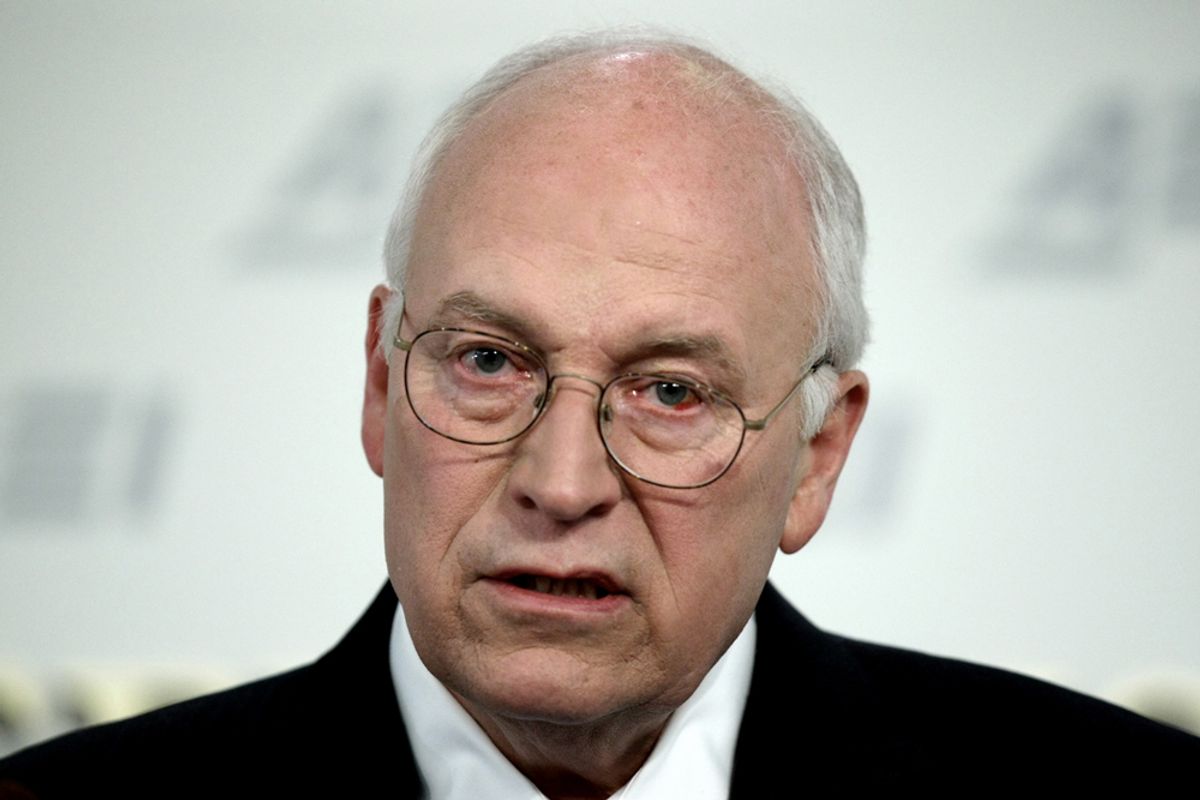 Less than three years ago, Dick Cheney was presiding over policies that left hundreds of thousands of innocent people dead from a war of aggression, constructed a worldwide torture regime, and spied on thousands of Americans without the warrants required by law, all of which resulted in his leaving office as one of the most reviled political figures in decades. But thanks to the decision to block all legal investigations into his chronic criminality, those matters have been relegated to mere pedestrian partisan disputes, and Cheney is thus now preparing to be feted -- and further enriched -- as a Wise and Serious Statesman with the release of his memoirs this week: one in which he proudly boasts (yet again) of the very crimes for which he was immunized.  As he embarks on his massive publicity-generating media tour of interviews, Cheney faces no indictments or criminal juries, but rather reverent, rehabilitative tributes, illustrated by this, from Politico today:

That's what happens when the Government -- marching under the deceitful Orwellian banner of Look Forward, Not Backward -- demands that its citizens avert their eyes from the crimes of their leaders so that all can be forgotten: the crimes become non-crimes, legitimate acts of political choice, and the criminals become instantly rehabilitated by the message that nothing they did warrants punishment.  That's the same reason people like John Yoo and Alberto Gonzales are defending their torture and illegal spying actions not in a courtroom but in a lush conference of elites in Aspen.

The U.S. Government loves to demand that other countries hold their political leaders accountable for serious crimes, dispensing lectures on the imperatives of the rule of law.  Numerous states bar ordinary convicts from profiting from their crimes with books.  David Hicks, an Australian citizen imprisoned without charges for six years at Cheney's Guantanamo, just had $10,000 seized by the Australian government in revenue from his book about his time in that prison camp on the ground that he is barred from profiting from his uncharged, unproven crimes.

By rather stark contrast, Dick Cheney will prance around the next several weeks in the nation's largest media venues, engaging in civil, Serious debates about whether he was right to invade other countries, torture, and illegally spy on Americans, and will profit greatly by doing so.  There are many factors accounting for his good fortune, the most important of which are the protective shield of immunity bestowed upon him by the current administration and the more generalized American principle that criminal accountability is only for ordinary citizens and other nations' (unfriendly) rulers.

UPDATE:  I'll be on MSNBC tonight at 8:10 pm EST or so, on Lawrence O'Donnell's Last Word program, talking about these matters with guest-host Chris Hayes.