Omitted facts from the 9/11 commemoration 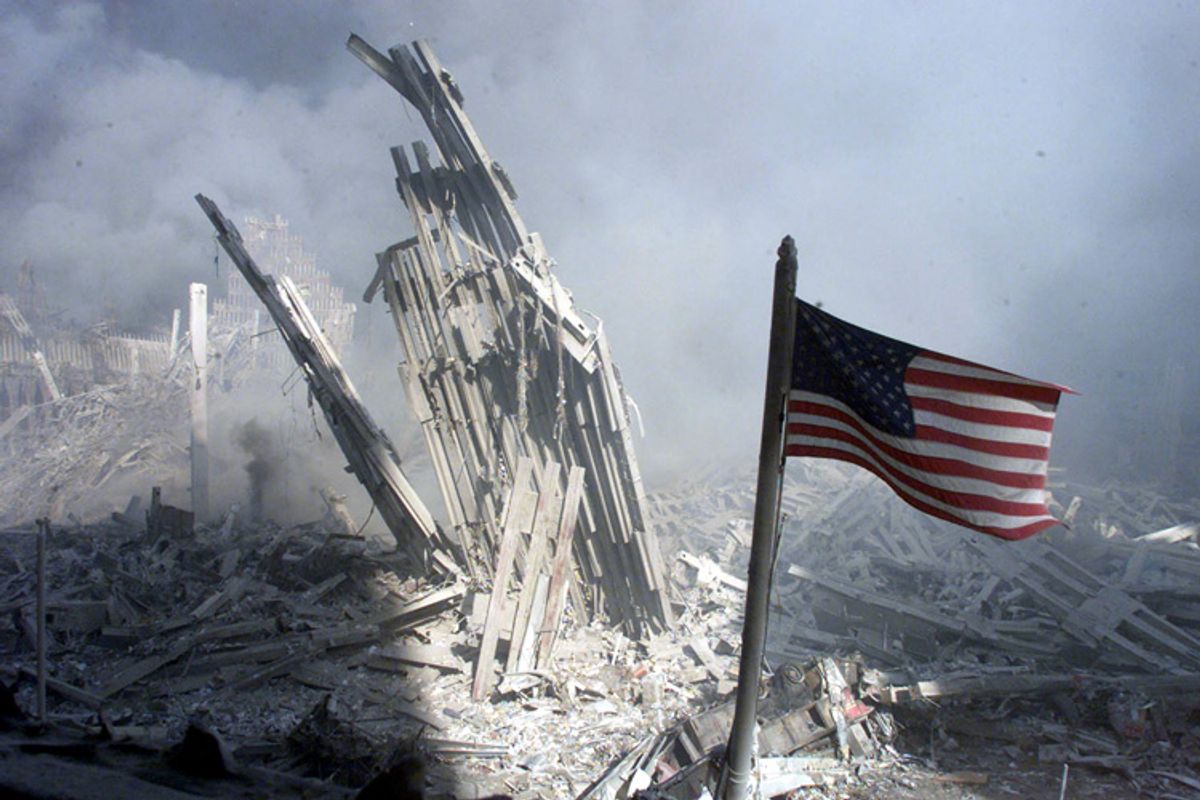 Am American flag flies near the base of the destroyed World Trade Center in New York, September 11, 2001. Planes crashed into each of the two towers, causing them to collapse. (Â© Peter Morgan / Reuters)
--

The Obama administration has issued formal guidelines identifying the messages government agencies are to communicate as part of the commemoration of the 10th anniversary of the 9/11 attack.  The New York Times obtained a copy of these guidelines and notes one significant omission:

The guidelines say the absence of Al Qaeda playing any significant role in the "Arab Spring" uprisings against longtime autocrats in the Middle East and North Africa should be cited as evidence that Bin Laden’s organization "represents the past," while peaceful street protesters in Egypt and Tunisia "represent the future." Left unsaid was that many of the deposed leaders were close American allies and partners in counterterrorism operations.

That little fact is not only "left unsaid" in the administration's 9/11 messaging guidelines but in almost all media and political discussions of the Arab Spring (kudos to the NYT for its rare inclusion here).  That is why, at the risk of invoking an Internet cliche, I literally laughed aloud when I read Roger Cohen's giddy self-celebration in this morning's NYT over the glorious American "victory" in Libya.  Leaving aside how obviously premature and information-deprived his victory dance is, Cohen's concluding passage struck me as so delusional as to be darkly humorous:

In the end, I think interventionism is inextricable from the American idea. If the United States retreats into isolationism, it ceases to be itself -- a nation dedicated, however much it falls short, to a universalist ideal of freedom.

There are no fixed doctrinal answers -- a successful Libyan intervention does not mean one in Syria is feasible -- but the idea that the West must at times be prepared to fight for its values against barbarism is the best hope for a 21st century less cruel than the 20th.

I honestly don't understand how anyone is able to sustain this fairy tale in their brain, pleasurable though it might be.  Is Roger Cohen even aware that, as his own newspaper put it today, "many of the deposed [Arab] leaders were close American allies and partners in counterterrorism operations"?  And even that understates the case: these tyrants weren't merely U.S. allies, but stayed in power for decades largely because the U.S. fed them with money, weapons, and training to maintain their grip on their own citizenries -- and continued to do so until their demise became inevitable.

It's one thing for the U.S. Government to "leave unsaid" these uncomfortable facts (and they are facts): that's just standard government propagandizing.  And it's another thing for people to defend such conduct on "realist" grounds: that it's wise or at least necessary to keep dictators in place to serve American interests.  But it's just extraordinary for a political columnist to proclaim that the same country which has spent decades propping up many of the world's most heinous dictators -- whom we agree not to hate until it's time to wage war on them and then righteous condemnation is suddenly unleashed against all their alleged sins (Saddam pulled babies from incubators, gassed his own people and had rape rooms!; Gadaffi's son abused his domestic servant!!) -- is devoted to freedom-spreading as a core "value."  In light of this long and overwhelming history, in what conceivable sense can it be said that removing dictators is a "value" of the U.S. or that it is "dedicated" to a "universalist idea of freedom"?

Even as nationalistic messaging -- which is not supposed to be Cohen's job -- it's ludicrous.  Many Americans may be blissfully unaware of this conduct by their government because of how often it is "left unsaid," but much of the world, particularly the people who lived under those regimes, certainly are not.  And as the Iraq war proved quite conclusively, having the West militarily remove a dictator of an oil-rich country with whom it long did business changes neither the reality nor the perception of U.S. conduct in the world.

But the most notable omission is reflected by this part of the message:

The White House has issued detailed guidelines to government officials on how to commemorate the 10th anniversary of the Sept. 11 attacks, with instructions to honor the memory of those who died on American soil but also to recall that Al Qaeda and other extremist groups have since carried out attacks elsewhere in the world, from Mumbai to Manila.

It's commendable (or at least shrewd) enough that the White House wants to internationalize the commemoration of Al Qaeda's victims over the last decade.  But what will also be "left unsaid" are the vastly more numerous victims of America's militarism and aggression -- both in putative response to 9/11 and leading up to that attack (and that's not even counting the various  victims of America's client states using U.S.-supplied weapons).  That's not a criticism of the Obama administration per se -- no U.S. government is going to include those facts when it comes time to squeeze the still-potent emotional impact of 9/11 -- but the fact that victims of American violence over the last two decades have easily outweighed, and continue to outweigh, those of the Dictators and Terrorists whom we so vocally despise is nonetheless an extremely important fact that should shape our understanding of 9/11.  But as usual, that's another fact that will be "left unsaid."

UPDATE:  Col. Lawrence Wilkerson, the former Chief of Staff to Gen. Colin Powell when Gen. Powell delivered his infamous Iraq/WMD speech to the U.N., is certainly aware of these omitted facts and is unwilling to ignore them.  I was on Democracy Now with him this morning, talking about Dick Cheney's book, and he had some very interesting things to say. He's what someone with a moral conscience sounds like after being involved in some very bad acts.  It's well worth watching.  Raw Story has the story and the video here, and the transcript is here.