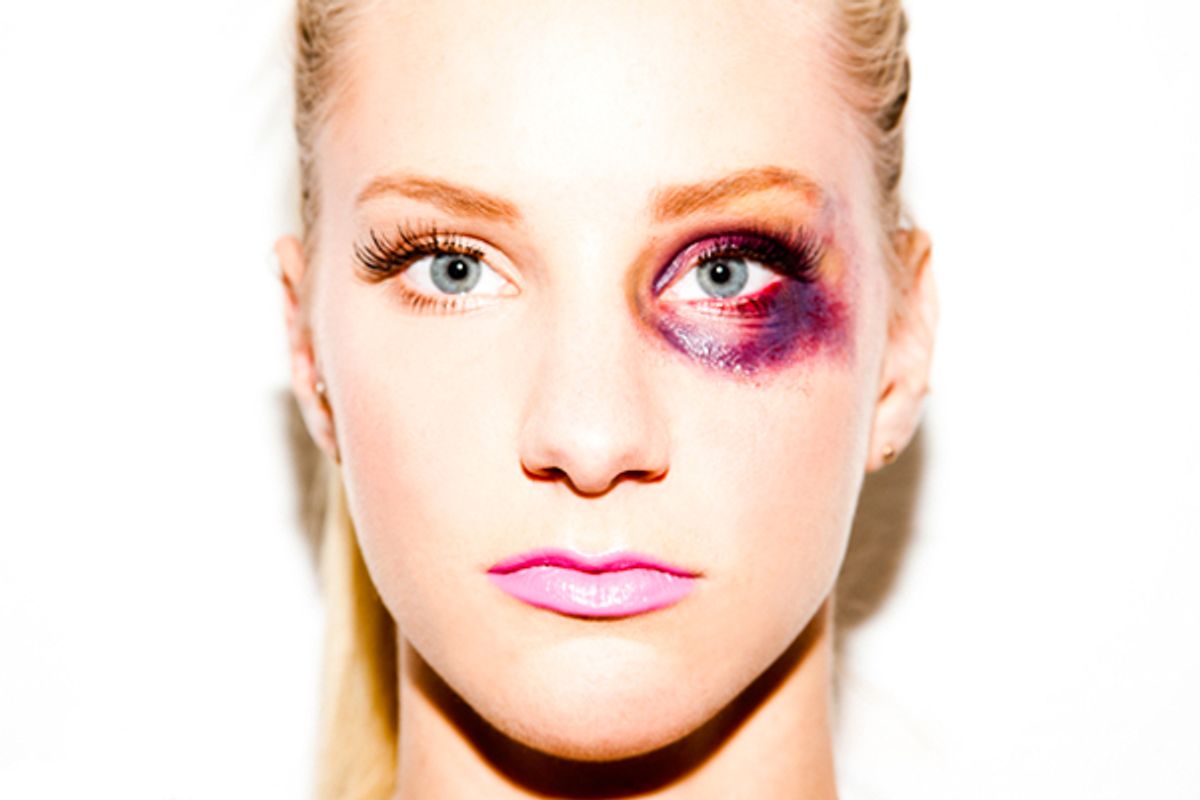 How do you photograph a beautiful blonde? Put her in a pretty dress and high heels, of course. If you're Los Angeles lensman Tyler Shields, and the lady in question is "Glee" star Heather Morris, you might want to add "some magic, irons, and bruises." Then, just wait for the controversy to erupt.

Last week, Shields posted a new series of photos he'd shot of a primly ponytailed Morris on his website, along with the note that "Even Barbie bruises." In the pictures, the doll-like beauty appears made up with a whopper of a black eye, gets tied up with the electrical cord of an iron, lounges playfully on an ironing board and, in one shot, turns the tables and brandishes the appliance at the crotch of the photographer himself. It's certainly a far cry from the usual hot chick in her underwear tableaux you might expect from a shoot featuring one of the stars of a hit TV show. But does it make abuse look sexy?

It didn't take long after the photos went up for commenters to give Shields a piece of their minds. One visitor of his blog wrote, "As a survivor (note SURVIVOR, not victim) of domestic violence, these photos glamorize domestic abuse. There is nothing funny or 'edgy' about receiving a black eye from your spouse/love/significant other." Another said that the images "glorify the beauty of a woman with a black eye, and then ignore the fact that millions of women are abused domestically each year. They paint a picture of how beautiful a vulnerable, hurt woman looks, and then tell us that we’re crazy for ever assuming she could be hurt." Echoing that sentiment, Rita Smith, executive director for the National Coalition Against Domestic Violence, told E! last week that "I'm quite sure there are plenty of women who have been abused by these kinds of household appliances and children as well being hit with electrical cords ... If he had stopped with the image of the bruise, [the pics] could conceivably be used as a way to raise awareness about the impact of violence. But the other things do make it look appealing, as if she might be enjoying the process and I don't think that's helpful."

Shields, meanwhile, has defended the photos, explaining to the Daily Mail, "In no way did we even think about promoting domestic violence." But after admitting "a lot of people have been sending me death threats," he's stated that "We do have people talking, so I will auction off three photos for $100,000 each and I will give every penny to charity if they sell. So if you are anti-domestic abuse spread the word about it. Threatening to kill me is not going to help anything." (It's also ridiculously ironic, Internet pinheads.) All proceeds from the black eye portraits will go to Glamour magazine's "Tell Somebody" campaign. Shields is also auctioning off two other signed editions from the shoot, and will donate 30 percent of the proceeds from their sale to the campaign as well.

The cast members of "Glee" are no strangers to controversial photo shoots. Last year, they stripped down to their skivvies for a GQ spread that seemed inspired by the editorial thrust of Barely Legal,  and went "wild" -- and flashed underpants -- for the cover of Rolling Stone. And Shields knows his way around button-pushing subject matter himself. His photos often feature stunning men and women in various states of undress  and wielding weaponry. He's shot a cow with the words "Eat Me" on her side. And last year, he did a blood splattered shoot with Lindsay Lohan that featured the actress lingerie-clad -- and staring down the barrel of a gun.

Rita Smith told E! last week that "There is nothing glamorous about violence." And it makes sense that the image of a seemingly battered woman would provoke a strong and potentially pained response. Real abuse happens every day, and it's not sexy or beautiful. But art is not that simple, and imaginary violence can in fact be incredibly glamorous. A Hitchcock or John Woo movie has an elegant grotesqueness to it. The vamps of "True Blood" and the gangsters of "The Sopranos" fascinate us with their lurid exploits. Likewise Shields, with his daggers and gore, has a distinctive penchant for the dark side. Frankly, I don't find his work all that interesting, but I can certainly appreciate that he's working in a particular vernacular.

Had the photos of Morris appeared in a mainstream magazine, or as part of a Fox "Glee" promotion, they'd have an entirely different connotation. Magazines have their own editorial voices, and exist to both peddle their advertisers' products and reflect the thoughts and ideas of their readers. It would therefore be peculiar if either Old Spice or the average Esquire reader would want to be aspirationally associated with the image of a badly bruised woman. But an individual photographer, solely pursuing his own vision, has every right to dream up whatever scenarios strike his fancy. This Shields guy is into blood and pain and "Star Wars" characters. That's his thing.

Art isn't always easy or safe or unthreatening. It's not all catchy covers of Katy Perry songs in prime time. And even if it's great that the Morris photos will now be used to help women in crisis, they weren't created to "raise awareness" or be "helpful."  Sometimes art is tough as hell. Sometimes it makes us angry, or reminds us of things that hurt. Sometimes it mixes up the sacred and the profane, the beautiful and the horrible. You can love it or hate it, but if you think its job is to not upset you, you're missing the point. Sometimes, its job is simply to hit you right in the face.