The ACLU on Obama and core liberties 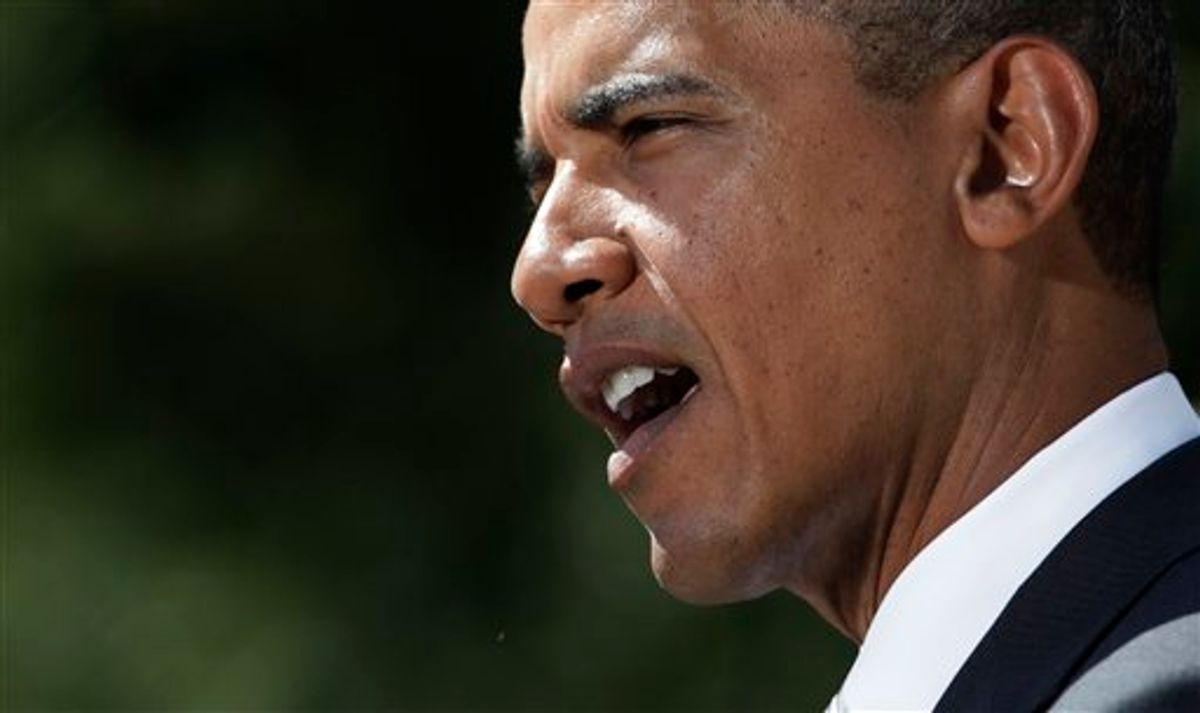 In this photo taken Aug. 31, 2011, President Barack Obama speaks in the Rose Garden of the White House in Washington and urged Congress to pass a federal highway bill. In his weekly radio Saturday, Sept. 3, 2011, Obama again called for the passage of a transportation bill, and express concern that "political posturing" may stand in the way. "There's no reason to cut off funding for transportation projects at a time when so many of our roads are congested, so many of our bridges are in need of repair and so many businesses are feeling the cost of delays. "This isn't a Democratic or a Republican issue  it's an American issue," he said. (AP Photo/Carolyn Kaster, File) (AP)
--

The ACLU decided to use the 10th anniversary of the 9/11 attack to comprehensively survey the severe erosion of civil liberties justified in the name of that event, an erosion that -- as it documents -- continues unabated, indeed often in accelerated form, under the Obama administration.  The group today is issuing a report entitled A Call to Courage: Reclaiming Our Liberties Ten Years After 9/11; that title is intended to underscore the irony that political leaders who prance around as courageous warriors against Terrorism in fact rely on one primary weapon -- fear-mongering: the absence of courage -- to vest the government with ever-more power and the citizenry with ever-fewer rights.  Domestically, the "War on Terror" has been, and continues to be, a war on basic political liberties more than it is anything else.  The particulars identified in this new ACLU report will not be even remotely new to any readers here, but given the organization's status among progressives as the preeminent rights-defending group in the country, and given the bird's-eye-view the report takes of these issues, it is well worth highlighting some of its key findings.

Let's begin with the ACLU's summary assessment of what President Obama has done with regard to these matters:

Last week, the top lawyer and 34-year-veteran of the CIA, John Rizzo, explained to PBS' Frontline that Obama has "changed virtually nothing" from Bush policies in these areas, and this week, the ACLU explains that "most [Bush] policies remain core elements of our national security strategy today."  At some point very soon, this basic truth will be impossible to deny with a straight face even for the most hardened loyalists of both parties, each of whom have been eager, for their own reasons, to deny it (and even the two differences cited there, though positive, are wildly exaggerated by Obama defenders: the torture techniques authorized by Bush were no longer in use and the CIA black sites were empty by the time Obama was inaugurated; by contrast, there is ample evidence that the Obama administration continues to use torture by proxy and rendition/CIA-black-sites by proxy as well).

The ACLU then highlights one of the most perverse though revealing ironies of Democratic Party opinion on civil liberties in the Obama age: the way in which Bush's attempt merely to imprison a U.S. citizen without due process (or merely to eavesdrop on citizens) prompted such outrage, while Obama's claimed right to assassinate U.S. citizens without due process provokes virtually no protest:

Critically, the ACLU emphasizes that this Obama fixation -- wildly expanded programs of targeted killings even of U.S. citizens far from any battlefield -- is as threatening to the rule of law, and at least as dangerous, as any policy implemented by Bush/Cheney:

For all the talk about how Bush and Cheney turned the U.S. into a rogue state, here is the escalating result of this Obama policy:

The ACLU then devotes an entire chapter to the way in which immunity for America's torturers -- bestowed jointly by President Obama and a judicial branch meekly deferential to his and Bush's claims of state secrecy -- has contaminated and degraded the entire justice system and made the future reintroduction of torture a virtual inevitability:

Then there's the ongoing targeting of American Muslims for some of the most invasive and unconstitutional rights-abridging actions in decades.  Explains the ACLU: "No area of American Muslim civil society was left untouched by discriminatory and illegitimate government action during the Bush years . . . In short, the Bush administration used religious, racial, and national-origin profiling as one of this nation’s primary domestic counter-terrorism tools."  And now?

A separate chapter is devoted to what the ACLU calls "A Massive and Unchecked Surveillance Society."  It explains: "Using Patriot Act  authority, the Bush Administration started -- and the Obama Administration has continued -- to conduct wholesale 'preventive' surveillance of innocent Americans without judicial review."  And "the result is a national surveillance society in which Americans’ right to privacy is under unprecedented siege."  But little is known about exactly what is being done by this purely unaccountable hidden government -- what The Washington Post calls "Top Secret America" -- because of this:

But the primary cause of this Bush-Obama continuity is the vigorous embrace by both Presidents of the same theory of war and Terrorism -- the unlimited global battlefield and the President's resulting unconstrained power to act anywhere in the world without limits -- which was once so controversial during the Bush presidency but has now become mainstream, bipartisan consensus:

Pointing to that core theory of both presidencies, the ACLU dispatches one of the most misleading claims of Obama defenders: that the President's failure to close Guantanamo is due exclusively to Congressional obstructionism; in fact, long before Congress acted at all with regard to that camp, the President announced his intention to continue its core injustice -- indefinite detention -- albeit in a different locale:

During the Bush era, the actions and condemnations of the ACLU received ample positive attention from progressives. That, of course, is no longer true, and this damning report will likely be ignored in most of those circles, just as this truly remarkable comment from the ACLU's Executive Director has been.  And, as usual, anyone urging that attention be paid to these facts will be met with demands that eyes be diverted instead to how scary Sarah Palin Christine O'Donnell Michele Bachmann Rick Perry is, and then this will all blissfully fade away in a cloud of partisan electioneering even with the election more than a year away.

Either way, this creeping unchecked authoritarianism marches forward unabated, and is now -- rather than the province of the right-wing GOP -- fully bipartisan consensus.  I really don't understand how progressives think they'll be taken seriously the next time there is a GOP President and they try to resurrect their feigned concern for these matters; they'll be every bit as credible as conservatives who pretend to be deficit-warriors and defenders of restrained government only when the other party is in power.

But even that ultimately matters little: so entrenched is this institutional militarism, secrecy, surveillance and authoritarianism that even if there were greater public debate over it like there was during the Bush presidency, this system would hardly be affected, let alone threatened.  Governments and other power factions -- especially ones threatened by the prospect of social unrest and upheaval -- do not relinquish this sort of authority unless compelled to do so.

UPDATE:  Tomorrow morning beginning at roughly 11:20 am EST, I'll be on NPR's On Point, discussing 9/11 and civil liberties, along with The Washington Post's Dana Priest, who will be on from the start of the show at 11:00 am discussing Top Secret America.

Former Defense Secretary Donald Rumsfeld says President Barack Obama has come to accept much of the Bush Doctrine out of necessity, despite what he campaigned on in 2008. . . .

“They ended up keeping Guantanamo open not because they like it — we didn’t like it either — but they couldn't think of a better solution,” Rumsfeld told Fox News’ Greta Van Susteren on Tuesday. . . .

"The same is true with the Patriot Act, and military commissions, and indefinite detention. All of those things were criticized but today are still in place two-and-a-half years later because they are the best alternative to the other choices -- and they are in fact successful in keeping America safer," he says.

Just as nobody could have strengthened the Bush/Cheney Terrorism template the way Obama has, so, too could nobody have provided vindication for those policies the way he has.