David Cronenberg's latest traces Jung's split with Freud, and the stars may be the year's hottest cinematic couple 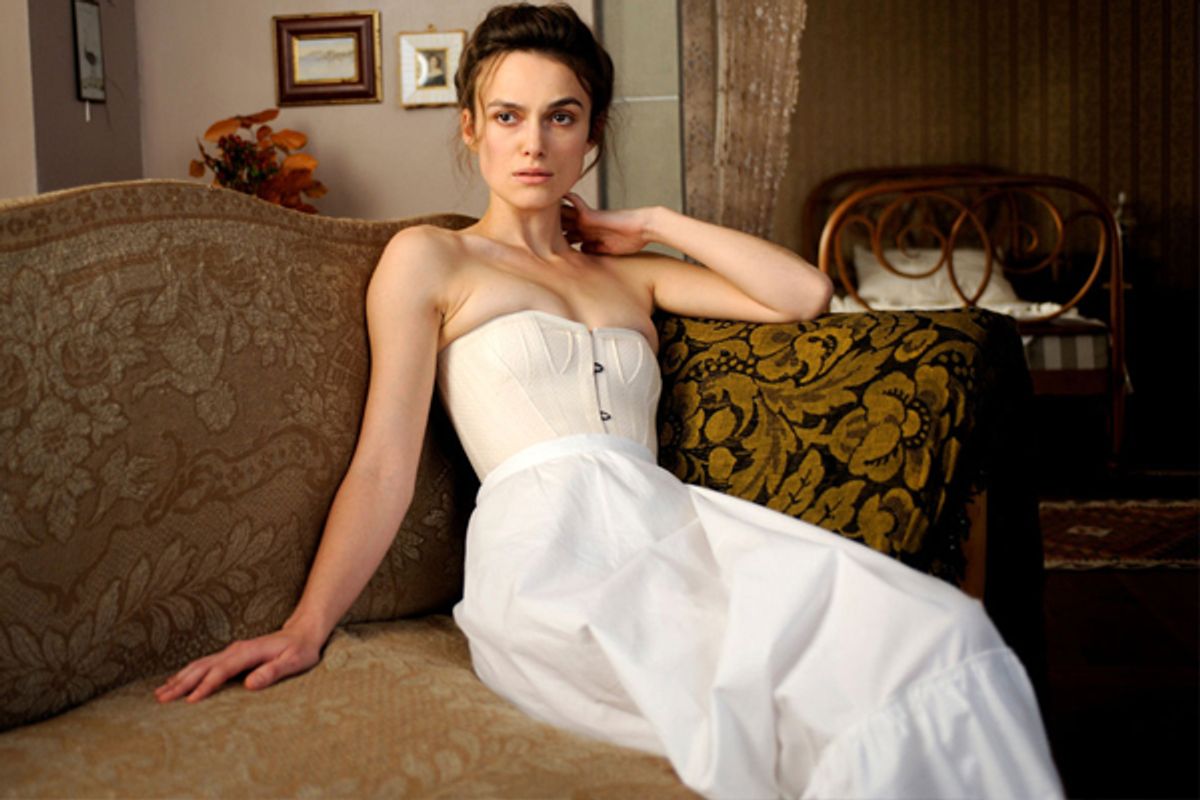 Keira Knightly in "A Dangerous Method"
--

TORONTO -- I don't have the impression too many people visit Canada's Queen City for the beaches, but this year's Toronto International Film Festival got underway in such spectacular end-of-summer sunshine that you wanted to hit the lakeshore instead of going inside. That didn't stop an hour-long line from forming outside the luxurious new Bell Lightbox theater on King Street for the press screening of David Cronenberg's "A Dangerous Method," a film that carried us across the ocean and back in time, to early 20th-century Europe and the first years of modern psychiatry. You wouldn't know this was a Cronenberg film if you didn't know it going in, and I offer that neither as praise nor criticism. Even as it deals with sexual perversity and severe mental illness, "A Dangerous Method" is a restrained and elegant costume drama driven by characters, language and ideas, not violence or outré imagery.

It's no surprise that Fassbender, the brilliant young Irish-German actor who starred in "Jane Eyre" and "X-Men: First Class," convincingly inhabits Jung's blend of intellectual ambition, spiritual and metaphysical curiosity and Swiss-German rectitude. But Knightley, who's always had plenty of detractors amid the chattering classes, is in many ways the real star of this film. When we first see Sabina, she is being forcibly hauled, howling and in the grip of some kind of seizure, through the doors of Jung's clinic near Zurich. She's a woman almost literally aflame with both superior intelligence and repressed sexual desire, not qualities that fit well with standards of femininity circa 1904. Later on, when she first kisses Jung on a park bench, he is taken aback. It's men who make the first move, he tells her in fine Protestant style. "Don't you think there is a little man in every woman, and a little woman in every man?" she murmurs. (Yes, there are a few brief and undeniably hot scenes of S/M sexuality between Fassbender and Knightley, but nowhere near NC-17 territory.)

Yes, it's that kind of script, adapted by Christopher Hampton from his play "The Talking Cure," which follows the Tom Stoppard method of boiling down a significant but poorly understood historical episode into well-made drama. Frankly, I didn't mind at all that Carl and Sabina's doomed love story becomes the architecture for a lot of literary and academic talk, but it definitely won't be everyone's cup of tea. The other thwarted romance in the movie, you might say, is the one between Jung and his even more famous mentor, that guy in Vienna with the beard. Viggo Mortensen plays Sigmund Freud in supremely understated style -- almost too understated -- as an unadventurous Jewish bourgeois husband, in sharp contrast to the dashing, Teutonic Jung, whose aristocratic lifestyle depended on his long-suffering and extremely rich wife Emma (Sarah Gadon). When Jung takes Freud boating on Lake Zurich, the father of psychoanalysis sits awkwardly in the bottom of the yacht clutching his cane and homburg, clearly uncomfortable so far from pavement.

What you may already know about the story is that Jung sometimes had affairs with his patients -- Sabina was the first but not the last -- and Freud didn't, and also that the two men fell out over a variety of issues, most notably the scientific limits of psychiatric inquiry. Both men have their armies of detractors and defenders to this day, but Hampton is less interested in taking sides than in depicting them as deeply flawed people whose personality quirks would have an outsize influence on what would follow. Freud's cautious, conservative nature and his single-minded focus on sexual repression as the source of neurosis led to the creation of psychiatry as a legitimate medical and scientific field -- one that was often resistant to change and dominated by authoritarian father figures. If anything, Mortensen's Freud comes off in this movie as both a small-minded bigot and a pompous ass, who refuses to recount a dream to Jung for fear of losing his authority over such matters, and who tells Spielrein that her real mistake was sleeping with a Gentile.

Jung's passionate hunger for knowledge and cross-cultural curiosity, on the other hand, would open up vast new fields of study, some of them utterly bogus. He was clearly the progenitor of alternative and New Age psychology, which has so often blended intriguing insights with outright quackery and half-baked religiosity. As for the affair between Jung and Sabina Spielrein, which she steamily depicts as a creative fusion of opposites -- doctor and patient, man and woman, dark and light, Jew and Aryan -- Hampton and Cronenberg want to complicate that picture too.

Jung was well aware that he was violating the most basic professional standards, and ashamed of it. But at least in this telling he was in love with Sabina, and the discoveries they had made together, both in the office and the bedroom, were undeniably intoxicating. From the beginning of the affair, he was trapped by ethical and moral considerations as well as pragmatic ones, since he was never likely to leave his affluent wife for a penniless Russian Jewish refugee. As for Sabina, I think Cronenberg and Hampton are nominating her as a proto-feminist heroine, who had to lose the man she loved in order to advance the sexual and professional freedom of all women. Everyone who enjoys a nice little spanking from time to time, it seems, has her to thank for it. (In real life, Spielrein returned to Russia and became one of the Soviet Union's leading psychiatrists, before dying during World War II.)

I want to see "Dangerous Method" one more time before it hits theaters (it's scheduled to open around Thanksgiving), but my initial take is that it's a handsome and stimulating film, noteworthy more for its terrific acting and provocative ideas than for any kind of dark Cronenbergundian genius. Partly that's the elegant European locations and period costumes, photographed gracefully by Cronenberg's longtime cinematographer, Peter Suschitzky, and partly that's the literary-academic-historical nature of the project. Still, this movie has an erotic, psychoactive undertow it wouldn't have with, say, Clint Eastwood at the controls, and Fassbender and Knightley may be the year's most potent cinematic couple.