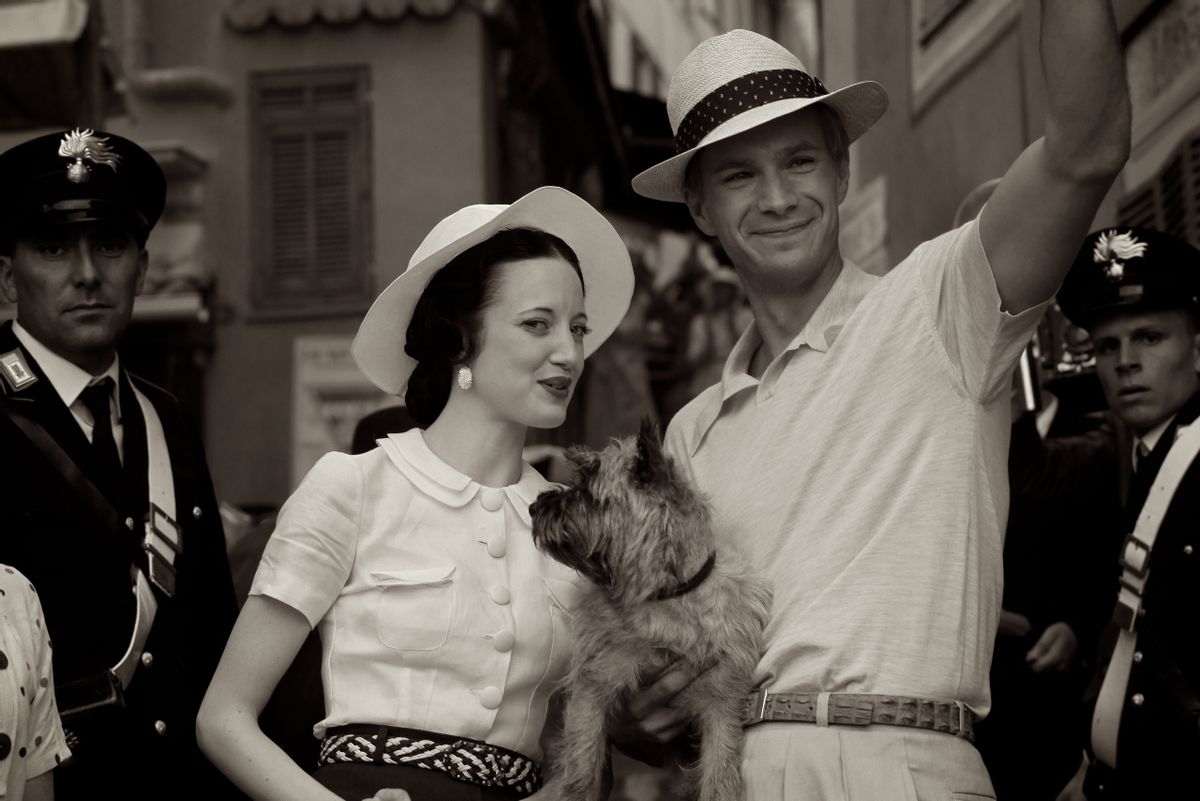 TORONTO -- As I left the North American premiere of "W.E." in Roy Thomson Hall, home to this city's symphony orchestra and the largest of the Toronto International Film Festival's venues, a hubbub suddenly erupted just to my left. A tiny woman in a black diaphanous gown, with her hair in blond ringlets that glowed with an almost radioactive brilliance, was walking out of an adjacent door. For a second or two she was right next to me, and then her pursuing entourage pushed her onward, through the crowd of photographers and ordinary people with iPhones, and she was gone. Of course I knew it was Madonna, since I'd just sat through her sad, silly and rather sweet motion picture and couldn't help noticing that she was sitting a few rows away. But I couldn't see any relationship between this trim, ferocious middle-aged lady with the painted smile and the once-notorious pop singer. It didn't feel at all like an encounter with Madonna. Did Freud have a term for this phenomenon?

I don't simply mean that the film "W.E." is sad and silly and sweet, although those are good words for it. The whole evening had those qualities. Madonna was pursued on the red carpet by an impressive phalanx of photographers, and there were several hundred fans on the sidewalk outside Roy Thomson Hall who screamed in joy on her arrival. (Despite rumors of her prickly backstage behavior here, she worked the outside crowd generously.) Both as the lights went down in the theater and as the final credits rolled, several people in the audience shouted, "Thank you, Madonna!" and had to be shushed severely. In her opening remarks before the film, Madonna got a huge ovation when she said that, as a native of Detroit, she felt "almost Canadian," and a big laugh for joking about her near-arrest by Toronto police in 1991 for simulated onstage masturbation.

But in the wake of "W.E.'s" reportedly disastrous Venice premiere, the Toronto screening was not even close to a sellout. There were banks of empty seats in the Roy Thomson upper reaches, and the press section where I sat was barely half-full. Harvey Weinstein, whose company will distribute "W.E." in the United States, was not present, and the film's theatrical and commercial future appears uncertain. But Canadians are a kind and polite people, especially compared to the boorish audiences at Venice, and there was no booing and catcalling at all, and a generous round of applause at the end. Were we applauding "W.E." for not being as bad as all that, applauding Madonna to make her feel better, or applauding ourselves for being such a nice, supportive audience? All of the above.

You can't call "W.E." a total disaster; it's too pretty, too nonsensical and finally too insignificant for that. Rather, it's a heavily decorated and overly complicated exercise in female narcissism, which in its plotless meandering fashion seeks to draw a mystical connection between an unhappy Manhattan wife (Abbie Cornish), circa 1998, and Wallis Simpson (Andrea Riseborough), the Baltimore socialite who married King Edward VIII. Riseborough gives a richly enjoyable performance as the prickly, strange and not especially beautiful American who pulled a king and emperor from his throne, and some of the 1930s scenes are pretty fun, after the fashion of outtakes from "The King's Speech" turned into music videos or haute couture shoots. Madonna and co-writer Alek Keshishian (who directed "Truth or Dare" way back in 1991) go right at the historical reputation of Wallis and Edward as Nazi sympathizers, and to the extent that "W.E." is an attempt to rehabilitate them at least it has a clear agenda.

But even having seen the movie I can't figure out what mistreated, ultra-rich 1990s Manhattan housewife Wally (Cornish) is doing in it. OK, she was named after Wallis Simpson and has always been fascinated with her, and an auction of Wallis-and-Edward memorabilia at Sotheby's serves as her introduction to a deadly handsome Russian security guard (Oscar Isaac) who also plays concert-level Rachmaninoff and has a conveniently dead wife. It's tempting to conclude that Cornish's character is a therapeutic stand-in for Madonna, who has acknowledged comparing herself to Wallis Simpson -- an American expatriate from humble origins who used shrewdness, sexuality and an intimate understanding of fashion and ritual to pull herself to the top of aristocratic Europe's social pyramid.

Once you get through the atrocious early scenes, "W.E." becomes a reasonably watchable and mostly non-narrative curiosity, a handsome fantasy mounted by someone who has no storytelling ability and no connection to real life. It's entirely possible that a radical re-edit could find a more normal seeming movie about the marriage of Wallis and Edward (James D'Arcy), but one that would require abandoning Madonna's crackpot central conceit, in which Wallis and Wally occasionally converse across the decades, offering advice and consolation one Material Girl to another. But whether we defend it or deride it, "W.E." just doesn't matter. It's an inconsequential footnote to the declining career of an immense pop superstar, one who is battling irrelevance with all her might but can't fend it off forever.