School: It's way more boring than when you were there

New studies show that the disappearance of art, music and even recess is having a devastating effect on kids 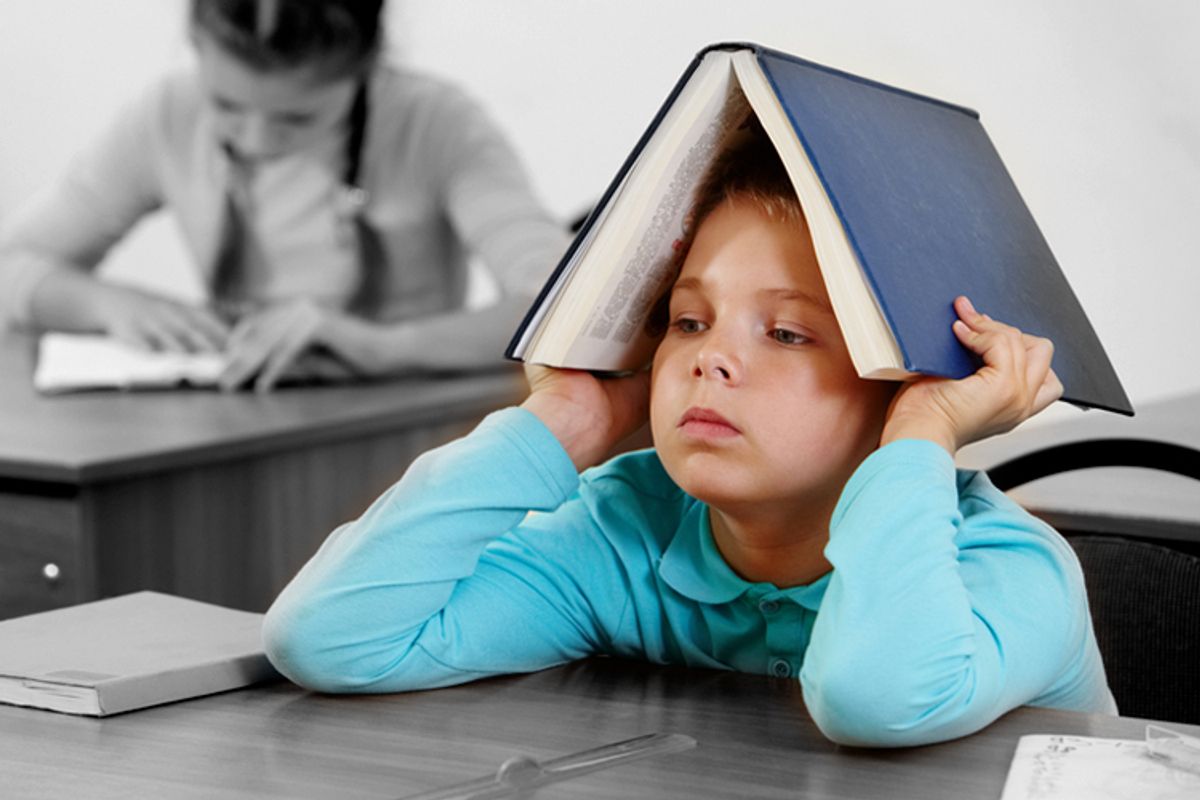 Forty-nine million or so American children have returned to public school classrooms that are, according to many critics, ever more boring. Preparation for increasingly high-stakes tests has reduced time for social studies and science. Austerity state and federal budgets are decimating already hobbled music, art, library and physical education budgets.

"When reading and math count and nothing else does, then less time and resources are devoted to non-tested subjects like the arts, science, history, civics and so on," education historian Diane Ravitch, a well-known high-stakes testing critic and one-time proponent, writes in an email to Salon.

Supporters of the self-described "education reform" movement counter that evaluating teachers based on test scores is the only way to ensure good teaching, and that focused attention on reading and math is necessary to boost poor students' achievement.

But the achievement gap is still wide, and there is (hotly disputed) evidence that students are afforded less time for creative inquiry. A 2007 Center on Education Policy study found that 44 percent of elementary schools had decreased instructional time spent on non-tested subjects since the 2002 implementation of No Child Left Behind, on average reducing time spent teaching the scorned subjects by 32 percent.

A study by the organization Common Core slated for release later this fall has found even more dramatic changes, particularly in elementary school where one teacher teaches all subjects and instructional change can take place more informally.

"We were surprised at the extremity of the narrowing indicated by the teachers who took our survey," says Common Core executive director Lynne Munson, a deputy chairwoman of the National Endowment for the Humanities during the Bush administration and former fellow at the conservative American Enterprise Institute. "We were particularly surprised to see that not only a narrowing across the grades, but in elementary it's really been acute. It is overwhelming."

Andy Rotherham, a researcher for Bellwether Education and a columnist at Time magazine, counters that while curriculum narrowing exists it is much smaller than the heated rhetoric would suggest, and that the blame lies not with testing but with poor instruction. He also questions the CEP study's methodology, and points to a 2009 Government Accountability Office study that found only 7 percent of teachers reporting a decrease in art instruction between the 2004-05 and 2006-07 school years.

"The problem we have right now is arguing over measuring sticks, but the real problem is a capacity problem," says Rotherham. "We're asking schools to jump over bars that they're not able to jump over."

The push for a narrow curriculum dates to the 1990s, he says, and so cannot be pinned exclusively on No Child Left Behind. Indeed, the problem of poor schools lacking resources for arts and music is an old one.

Whatever the cause, bored students take notice and are not showing up to class -- especially poor kids of color. A February 2011 report by Youth United for Change found that boredom was one of the greatest factors driving students in Philadelphia to drop out -- just 63 percent of students graduate within six years. The students who conducted the survey use the term "pushed out" to highlight the forces driving young people out the door.

"It's so much time put into the testing, and it gets boring," says Romeo Rodriguez, a 21-year-old who left a number of Philadelphia schools and a study author. "To sit there and read constantly, the same questions that they ask every year." Young people interviewed for the survey said there was too much test prep and too few extracurricular activities, arts and vocational training.

The change is coming from the top. No Child Left Behind was President George W. Bush's signature education policy initiative, requiring schools to make Adequate Yearly Progress (AYP) on reading and math tests or face tough penalties -- including closure. President Barack Obama's Race to the Top grant competition consolidated the focus on reading and math, and leveraged federal funds to push states to tie teacher evaluation to student test results.

Schools are now asked to do a lot more with a lot less. The 2009 federal Recovery Act (stimulus) saved an estimated 342,000 education jobs. With just $2 billion of $39 billion in funds remaining, catastrophic cuts are now in place -- with more likely in coming years without a major boost in state and federal funding.

More than 290,000 school district jobs have been eliminated since August 2008, according to a study released last week by the left-leaning Center on Budget and Policy Priorities. More than 190,000 of those jobs were eliminated over the past year. A majority of 24 states studied (representing two-thirds of the nation's students) had cut funding -- sometimes drastically: South Carolina, Arizona and California each cut more than 20 percent. And since state education budgets are generally allocated through formulas that prioritize aid to low-income students, districts with the bulk of such students often take the greatest hit. Once again, it seems likely that the poor are suffering from the most boredom.

At the "lowest-performing" schools, which also tend to be the poorest and least white, schoolwide pep rallies are common in the lead-up to test day, and schools hang large banners celebrating their AYP achievements. Poor schools are desperate to make AYP on standardized tests.

"We had rallies to try to hype up people for PSSAs [Pennsylvania System of School Assessment]," says Rodriguez. "To be honest, they didn't work."

Principals make it clear to teachers that test scores are paramount. From the president to the superintendent on down, math and reading tests are the only lens through which academic achievement and school success are interpreted. Adult jobs are on the line, and forced conversion to privately managed charter schools loom.

"The research is not clear," writes Ravitch, "but a great deal of anecdotal evidence suggests that affluent districts are preserving a balanced curriculum, while poor and minority students are likely to have larger classes and a bare-bones curriculum."

Supporters defend the predicament as a sad necessity.

"The bigger pressure, I think, is making sure that kids are ready to graduate high school and have the possibility to go on to college," writes Kelly Centolella, a 7th grade math and science teacher at a Los Angeles charter school and Teach for America alumnus. "If the decision is between a seventh grader taking an extra math class to make him or her ready for algebra or taking an art elective, I would be hard-pressed to not pick the extra math class."

Critics dispute that math and reading drills have closed the divide, and say recent cheating scandals in cities like Atlanta and Philadelphia indicate that some testing gains may be illusory. Rather than changing course, however, school districts are simply moving to tighten security measures -- though monitoring is still weak.

Bob Peterson, a 30-year veteran teacher from Milwaukee, argues that poor kids are most in need of a well-rounded education.

"Those are the kids that most need a robust education because their parents don't have the money to fund those things after school and in the summer," says Peterson, a longtime activist who recently took office as president of the Milwaukee Teachers' Education Association.

Ravitch says that when teachers get cut, arts and the humanities are the first people to go.

A 2010 study by the National Art Education Foundation found some improvements in arts curriculum development since 2002. But art teachers had an overwhelmingly negative attitude toward No Child Left Behind. They reported decreased staffing and funding, higher teaching loads, and students being pulled out of class for remedial work and test prep. A June 2011 study from the Center for Arts Education found that New York City lost 135 art teachers since the 2006-07 school year, and that about 23 percent of city schools have no licensed art teacher at all.

Even science, which President Obama heralded as the key to American prosperity during his 2011 State of the Union Address, is hurting. Science teachers complain they face reduced teaching time, and participation in science fairs nationwide has suffered.

"Less practical" subjects fare even worse, and the humanities are under increasing attack from higher education to elementary school.

"It looks like the only way humanist educators and their students are going to get to the top is by hanging on to the coattails of their scientist and engineering friends as they go racing by," writes Stanley Fish, a defender of the beleaguered liberal arts.

Bored children can find little respite: Recess, the midday distraction long treasured by listless youth, has declined as principals try to squeeze every last minute of instructional time from the school day. A 2005 Department of Education study found that students averaged only 26 minutes of recess per day, with poor kids getting even less.

Even kindergarten has found itself on the losing end of a war against play. Instead of playing house, dressing up or drawing, 5-year olds now busy themselves with math worksheets. A 2009 study by the Alliance for Childhood found that kindergartners in Los Angeles and New York City spent six times as long on literacy and math (two to three hours daily) as playing (30 minutes).

"The importance of play to young children's healthy development and learning has been documented beyond question by research," write authors Edward Miller and Joan Almon. "Yet play is rapidly disappearing from kindergarten and early education as a whole. We believe that the stifling of play has dire consequences -- not only for children but for the future of our nation."