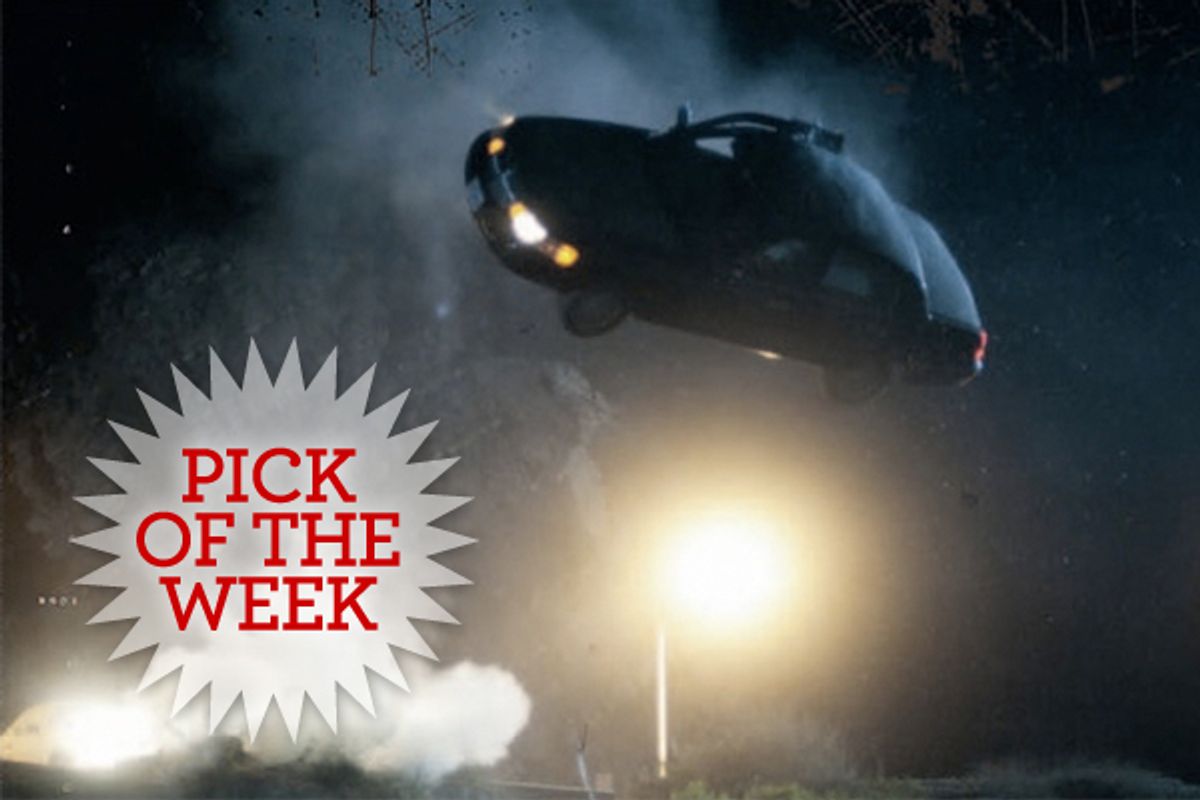 Editor's note: This is a revised and updated version of Andrew O'Hehir's original review of "Drive" from the Cannes Film Festival.

Take the hottest young male sex symbol in Hollywood, add an immensely skillful young European director with a worldwide cult following and plug them into a classic Los Angeles heist-gone-wrong story that recalls both Roger Corman's B-movie aesthetic and the glossy Hollywood spectacles of Michael Mann. You probably know already whether that's a movie you'd line up around the block to see or one you'd pay to avoid. Either way, it's called "Drive," and it stars Ryan Gosling -- who seems to have gone from indie actor and one-time Oscar nominee (for "Half Nelson," in 2006) to smokin'-est guy on the planet, almost overnight. It was made by fast-rising Danish director Nicolas Winding Refn, whose eccentric career ranges from the insane medieval fantasy "Valhalla Rising" to the campy, stylized prison film "Bronson" to his Copenhagen-set "Pusher" crime trilogy.

Ultra-violent and ultra-stylish, "Drive" stood out amid this year's Cannes and Toronto lineups for its calculated, hard-edged brilliance. It's both frankly commercial and sneakily artistic. Refn and Gosling clearly aspired to make a big international hit that critics could also love, but "Drive" might also become one of those genre-geek fetish objects that doesn't connect with a mass audience. Earlier this year at Cannes, "Drive" was the talk of the festival, and it's no wonder. The history of that festival is all about the long cinematic collaboration between Europe and America, and "Drive" distills that into one concise, intense and exciting movie.

Adapted by British screenwriter Hossein Amini from a novella by James Sallis -- and you'd have to say this is pretty far from Amini's award-winning script for the 1997 "Wings of the Dove" -- "Drive" follows a few days in the criminal career of a solitary, unnamed stunt driver, who works on movie sets by day and drives specially modified getaway vehicles at night. One obvious point of comparison for the Driver (as he is identified in the credits) is Clint Eastwood's Man With No Name in the Sergio Leone westerns; like him, the Driver wears the same clothes throughout the film -- a stained white bomber jacket with a yellow scorpion embroidered on the back -- speaks rarely and only when spoken to, and never lies or brags. Gosling is a very different actor from Eastwood, but they both use composure and self-containment, rather than volume or violence, to radiate toughness. He gives an awesome, almost iconic performance, but it isn't the one that will eventually win him an Oscar. (Gosling may have a better chance this year in "The Ides of March," but that one doesn't feel quite right either.)

As we learn in a dynamite opening sequence, the Driver hires himself out to robbery teams as a short-lived accomplice. He doesn't carry a gun and doesn't want to know much about what they're doing. For the right price, he'll get you where you want to go, just as often by out-thinking the cops, or sneaking past them unobtrusively, as by outrunning them. There are a couple of terrific old-school car chases in "Drive," but Refn isn't trying to outdo "Bullitt" or get the next assignment in the "Fast/Furious" franchise. This is more like a tense, moody noir in the Murphy's Law tradition, where the hero falls in love with the wrong girl and winds up with one of those bags of Evil Money that destroys everything it touches.

The wrong girl, in this case, is Carey Mulligan (an Oscar nominee for "An Education" two years back), nicely underplaying her role as a working-class American woman, quite sweet and a little lost. She lives next door to the Driver with her adorable little boy, and lets the Driver go pretty far down the road of friendship, flirtation and seduction before she remembers that her husband, who boasts the unlikely but irresistible name of Standard Gabriel (Oscar Isaac), is about to come home from prison. When that happens, Standard and the Driver circle each other cagily but never quite come to blows, and then the Driver makes the fateful decision to help Standard with that "one last job" that will get him out of debt to the shadowy gangsters threatening his family.

Of course, this allegedly straightforward pawnshop robbery in the San Fernando Valley goes as far off the rails as it possibly could, leaving the Driver and a girl he's just met named Blanche (Christina Hendricks of "Mad Men," in a brief but, shall we say, explosive role) holed up with an extremely large sum of money that some very bad people want to retrieve. Refn's tremendous supporting cast also includes an unforgettable turn from filmmaker and comedian Albert Brooks as an urbane-seeming but remarkably sinister crime boss, Ron Perlman as a low-rent, pizzeria-owning Jewish gangster, and Bryan Cranston (of "Breaking Bad") as the likable, fatherly mechanic who is the Driver's boss and only friend.

Refn's composition and lighting and editing instincts are miles, maybe light-years, ahead of those of most people who work in action movies. He's not enslaved by these archetypal characters and this classic "Treasure of the Sierra Madre" plot, nor is he seeking to reinvent or "subvert" them. It seems to me that he's trying to answer the question of what happens when you make this kind of American crime film really, really well: Is it just a slick, nifty entertainment, or can it lay bare issues about human nature that other forms of storytelling never quite face? Your answer to that question will probably determine how you feel about this movie. "Drive" builds extraordinary tension before exploding in brief outbursts of shocking violence, almost in the mode of a samurai film. There's one sequence shot in an elevator, which takes the movie from love story to violent revenge thriller within a few seconds, that film students will be deconstructing, shot by shot, for years to come. ("Drive" was shot by ace cinematographer Newton Thomas Sigel, whose credits include "Three Kings" and "The Usual Suspects.")

To some degree, the way "Drive" has been widely embraced by critics reflects some underlying anxiety among my profession, where people often feel that they're alienated from popular taste, and are left to extol the virtues of "cultural vegetables" that only a few bedhead masochists actually want to eat. "Drive" was literally greeted with hoots and howls of joy from the Cannes press, and I understood that exhilaration. But those who have called "Drive" the next "Pulp Fiction" are getting overexcited. Whatever you think of Tarantino's 1994 Palme d'Or winner, it literally changed the course of movie history and established a seductive paradigm for indie-film success that hasn't quite been exorcised 17 years later. "Drive" is a brilliant film, after its fashion, but it doesn't have the bigger-than-life pop sensibility or the Godardian lack of discipline of "Pulp Fiction." It's a breakthrough of an entirely different kind, an injection of clear, cool European technique into a classic American fable of guns, cars, girls and money. I think that's quite enough.