The criminal overuse of "Hallelujah" 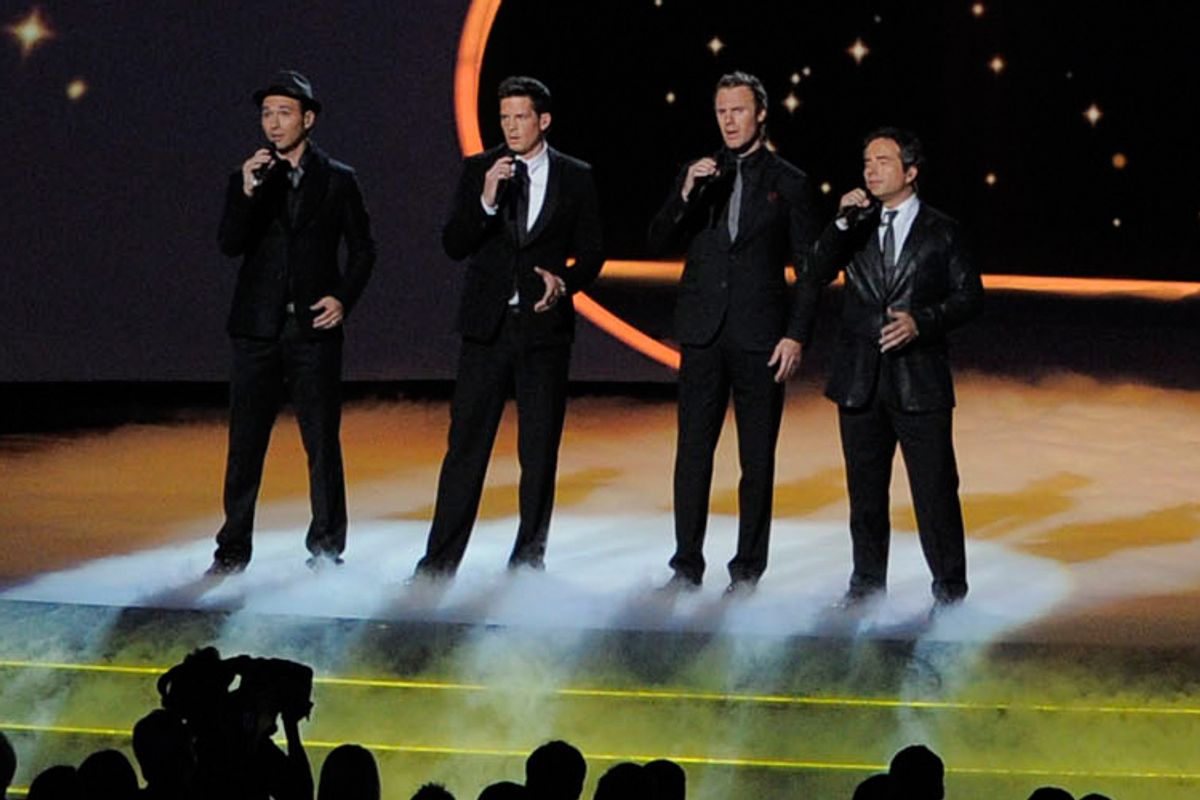 The Canadian Tenors perform "Hallelujah" at the Emmys Sunday night.
--

While Leonard Cohen studied silence in a Buddhist monastery, his former manager squandered his multimillion-dollar fortune. A court awarded him $9.5 million in damages, but the singer has yet to collect any of it.

So you could understand why Cohen might encourage the never-ending covers of his 1970s classic "Hallelujah," which the Canadian Tenors performed at the Emmys last night during the annual "in memoriam" salute.

Except for this: Even broke Leonard Cohen is sick of "Hallelujah." And has been for two years. "It's a good song," he told the Guardian in 2009, finally driven over the edge by the song's appearance during a sex scene in "Watchmen." "But too many people sing it."

More than 200 artists have covered "Hallelujah," according to the list on leonardcohenfiles.com, including the most famous versions by Jeff Buckley, John Cale and Rufus Wainwright, live versions by Bono and Bon Jovi, the two versions in "Shrek." And seemingly every version has made its way into a movie. Indeed, "Hallelujah" has become to music supervisors what "At Last" is to lazy wedding DJs -- cheap emotional shorthand for overwhelming spiritual feelings. And in the process, a beautiful, mysterious song has been turned into a tacky karaoke number, and become so common that it's been drained of its power to move.

This is not to say every version is as cheesetastic as the Canadian Tenors' over-the-top take. (For really over-the-top, try the Tenors' version from "Oprah," which adds Celine Dion to the mix.) Even after Cohen was officially tired of the song, "Hallelujah" was a showstopper for kd lang during the Opening Ceremonies of the 2010 Winter Olympics in Vancouver. Justin Timberlake's hushed performance that same year at the Hope for Haiti concert turned "Hallelujah" into a hit and the most downloaded song of the concert.

But for every lang cover that breathes new life into the song, there's yet another appearance on TV -- "The West Wing," "Scrubs," "The OC," even "ER." And that's before the TV talent shows got their hands on it -- when "X-Factor" champion Alexandra Burke rode "Hallelujah" to victory, it wasn't long before "American Idol" contestants broke it out as well, including Jason Castro in Season 7 and Lee Dewyze in Season 9.

Still, the song's cultural ubiquity never seemed quite as grating as it did during the Emmys -- perhaps because it represented the victory of sentiment over meaning. "Hallelujah," after all, is at its heart about sexual vulnerability and longing. "She tied you to a kitchen chair," Cohen sings in one verse. "She broke your throne, and she cut your hair and from your lips she drew the Hallelujah." Jeff Buckley famously interpreted it as a "hallelujah to the orgasm." That Emmy producers hear biblical references and a spiritual theme and hire Canadian choirboys to drain the song of its edge for a tribute to Steve Landesman and Peter Falk, well, it's about as comically misguided as Ronald Reagan adopting "Born in the USA" as a campaign theme.

So how about it, Hollywood? Before "Hallelujah" becomes the most overused song of its time, can we have a temporary moratorium? Would-be "American Idol" stars, we're looking at you, too. Give "Famous Blue Raincoat" a try. It's in all of our best interests -- if Justin Bieber discovers it first, it'll be over for everyone.