Team Jacob obsessives may love it, but this fourth-rate "Bourne"-style thriller does the Twi-hunk no favors 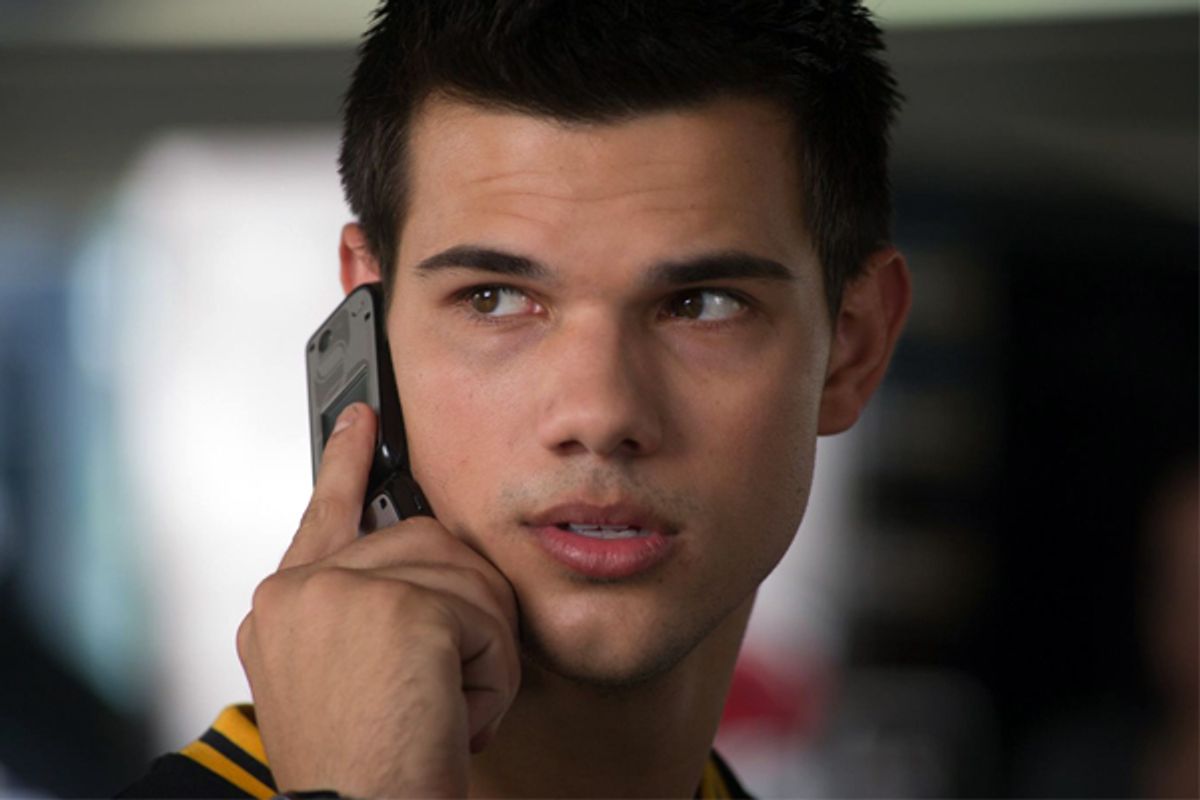 Writing a review of "Abduction," the new thriller designed as a star vehicle for "Twilight" hunk Taylor Lautner, is pretty much a free-fire zone. Lautner's fan base -- which I would presume to be young and female and interested in viewing his hairless and monumental chest -- isn't super-likely to read reviews before rushing out to see the movie. On the other hand, if you're here reading this, the likelihood that you're actually going to pay to watch "Abduction" is exceptionally low. So I can pretty much make up any damn thing without fear of contradiction: The sequence where aliens destroy the earth was pretty cool, but the B&D sex scene between Lautner and Sigourney Weaver was somewhat disturbing. Unless it was the other way around.

Yes, I'm desperate here. I'd really like to come up with some mildly contrarian take on "Abduction" -- to report, perhaps, that Lautner is a self-effacing charmer who can dance, or that director John Singleton (long, long ago the auteur behind "Boyz n the Hood") has reversed his long slide into hackdom and made an enjoyable "Bourne Identity" knockoff. Sadly, it's impossible to fake the faintest enthusiasm for this picture, which is a fourth-rate Hollywood thriller that bungles a lot of thievery from better movies, is entirely bereft of suspense or excitement and features a leading man who absolutely, positively cannot act. I saw the film with an old friend who compared Lautner's performance to that of Vanilla Ice in the legendary 1991 "Cool as Ice." I can't say, personally, but given that Lautner has considerable camera experience for a 19-year-old, his block-like impassivity and utter incapacity to register humor or emotion are remarkable. He spends the whole film looking smug or baffled, possibly smaffled.

Here's what I can say for "Abduction": It heightened my respect for the "Twilight Saga" movies, where Lautner is employed quite effectively as Jacob Black, the American Indian werewolf who relentlessly woos but will never win Kristen Stewart's emo-tinged, virginal heart. Jacob is of course a doubly "other" character, capitalizing on the fact that Lautner looks both racially ambiguous and borderline inhuman, and I suppose Singleton and screenwriter Shawn Christensen had some vague idea of emulating that. In "Abduction," Lautner plays a hard-partying Pittsburgh teen named Nathan, who discovers -- while surfing the Internet, literally -- that his parents aren't his real parents and that both the CIA and some quasi-Slavic hoods (their background and nationality and motives are never clear) are looking for him. So Nathan hits the road with the girl next door (Lily Collins, rumored to be Lautner's real-life squeeze) for a series of remarkably uninvolving chase scenes and supposed romantic interludes.

"Abduction" may win the 2011 prize for wasting good actors in absolute balderdash; we've got the aforementioned Sigourney Weaver as a psychiatrist and/or secret agent with a bouquet of balloons, Alfred Molina as a paunchy, lumbering CIA bigwig, and Swedish actor Michael Nyqvist (co-star of the "Girl Who ..." movies) as the sinister but non-specific international bad guy. Nyqvist and Lautner have a nice scene sitting in the stands together at a Pittsburgh Pirates game, and I would have paid good money to turn the movie into some kind of sentimental father-son drama at that moment. Furthermore, Pittsburgh is a picturesque city, underutilized in American film, and here and there Singleton seems to wake up from his extended power nap and pay attention to that fact. There! I finally said something nice, and kind of meant it.