Wonder how the other half lives? The Olsen twins sell out their alligator bags 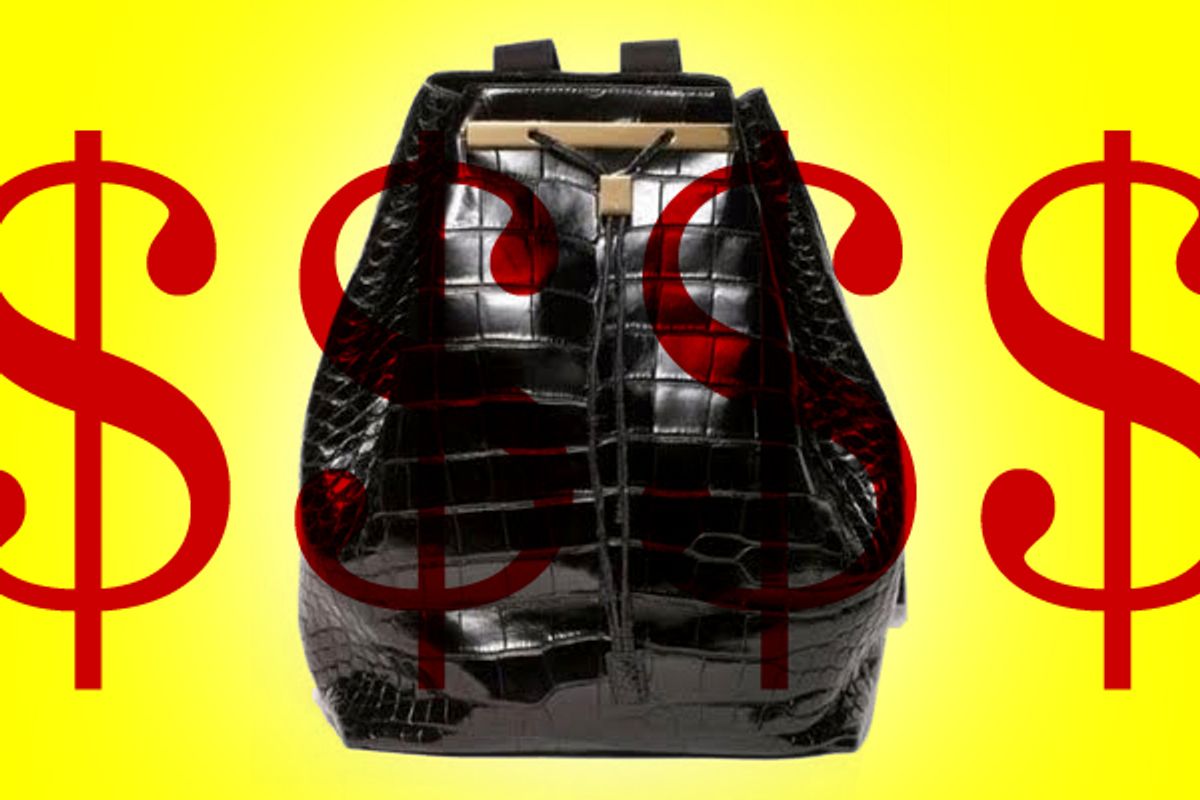 If you wanted to sum up what people mean when they toss around phrases like "class war" and "the 99 percent"  and "WTF," you might put it all down to this: $39,000 backpacks. Sold out.

It's been four years since the entrepreneurial Olsen sisters, Mary-Kate and Ashley, launched their luxury fashion line, the Row, and three months since they debuted their stylish and exorbitantly priced black crocodile bag. But it was the news this week that at the Paris launch of the handbag line, Ashley Olsen bragged that the backpack "was the first thing that sold off the shelf" that really took the let-them-eat-cake. Olsen added that luxury brands do well in hard times, noting that "During our last economic crisis in the U.S., the only thing that went up was Hermès," before, in the words of Women's Wear Daily, "returning to sip Champagne with guests including Michelle Harper and Christian Louboutin." As a commenter on CNN observed of this news, "This is what's wrong with America. The income inequality in this country is outrageous, we are well on our way to becoming a 3rd world country." Or, as another more aptly expressed it, "That's cray cray."

Of course, it's not as if piles of supple ostrich skin are flying off shelves like some end-of-days scene out of the Missoni for Target debacle. For perspective, it should be noted the New York Daily news reported last summer that a whopping two people had pre-ordered the bags. And back then, Barneys fashion director Amanda Brooks told Fashionista.com that "They truly are classic bags – and I think you also might be the only one who has it." I happen to think that if you're paying almost 40 G's for something 7-year-olds usually carry their lunch to school in, it had better be unique. I also think it should come with the deed to a house in the Catskills inside of it.

The rich will always be with us. There will always be big diamond rings and oversize mansions and $10 million weddings and impossibly priced accessories. Times are not equally tough on everybody, and Ashley and Mary-Kate are not the ones responsible for this economic pickle we're now in.

But it takes a special kind of out-of-touchness to boast, while sipping champagne, of selling out of an item that costs about as much as a year's tuition at an Ivy League university. To blithely say, as Amanda Brooks has, that "If you were ever going to spend $39,000 on a bag, that's the bag you should buy," when the average American annual income is, coincidentally, $39,054.62. If you're going to spend $39,000, you could also employ a person for a whole year! Wealth does not equal social obligation. And you can spend thousands on your purses and still be a decent, generous person. But these are not times for ostentatious displays of having, when far too many have not. And if you think the bag is so classic, you could always get it in the leather version. It's only $3,900.