It didn't even feel like he was trying on Tuesday night. Does he want the right to fall in love with Herman Cain? 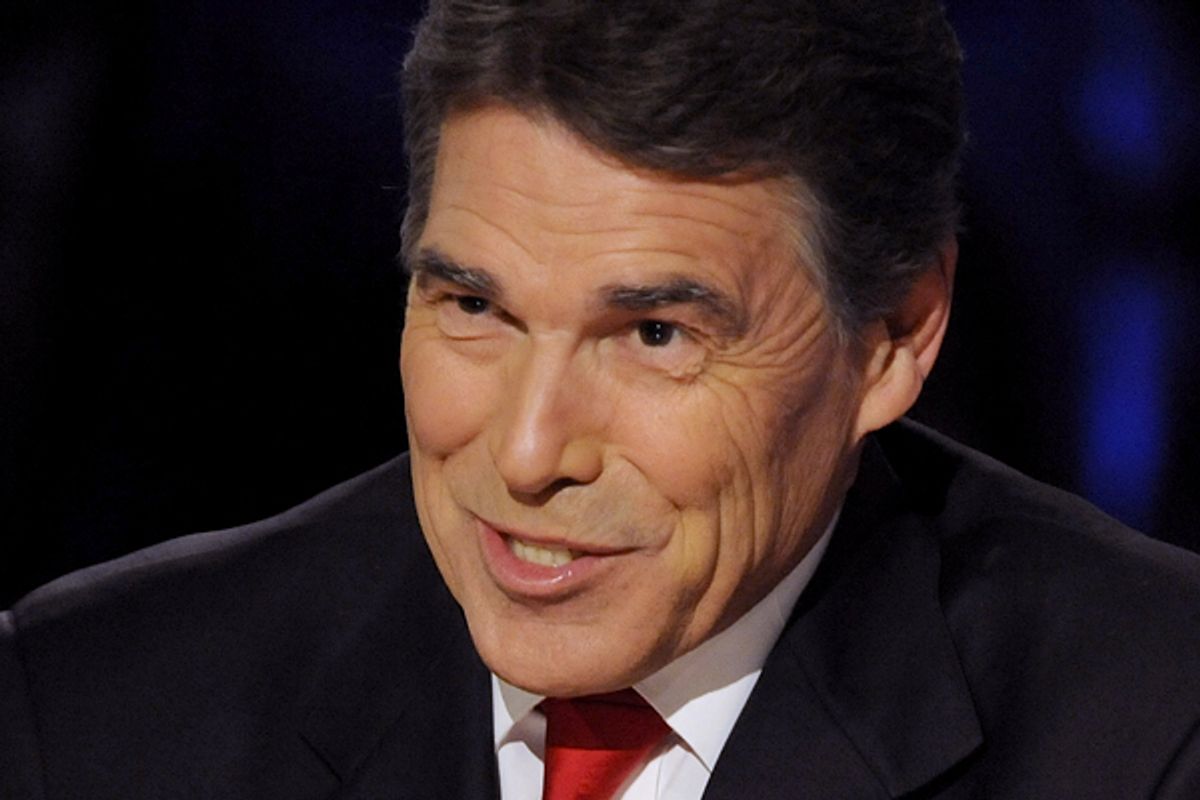 It was a new, more difficult challenge that Rick Perry faced in Hanover, N.H., Tuesday night: Find a way to stand out. And he failed.

Until recently, attracting attention was hardly a concern for the Texas governor. He burst into the GOP race in mid-August with all the eyes in the political world on him – and with conservatives poised to flock to his camp, if he could prove he was the skilled, electable candidate they badly wanted him to be.

Perry responded by doing virtually everything in his power to show that he wasn’t ready for the national spotlight, talking his way into trouble on the campaign trail, antagonizing conservatives who questioned his record on immigration, and turning in three increasingly ghastly debate performances that culminated in his painful attempt to confront Mitt Romney in the last debate, on Sept. 22.

Measured against that last outing, Perry’s showing in Hanover wasn’t actually that bad. The problem, though, is that the standard Perry needs to meet in debates changed over the last three weeks. “Not bad” might have cut it before, when conservatives were all looking to him to deliver them from the inevitability of Romney, but three weeks of deteriorating poll numbers and scathing reviews from Republican opinion-leaders have taken their toll.

By the time Tuesday’s debate rolled around, Perry had plummeted to third place in national polls, overtaken not just by Romney but by Herman Cain too, and his standing in Iowa and New Hampshire had plunged to even lower depths. The organizers in Hanover took note of this and swapped the seating around, putting Cain center stage next to Romney and moving Perry toward the periphery with the rest of the also-rans.

Hence the more complicated challenge for Perry. This time around, the action wasn’t going to automatically come to him. He would be handed fewer opportunities to speak, forced into a secondary slot in the question rotation, and subject to less attention from his rivals. This is the treatment that candidates who are polling at 4 percent in New Hampshire and 9 percent in Iowa receive. It would be up to Perry to make the most of the moments he was given and to force the moderators – and his opponents – to pay him more attention.

Subtracting for commercials (and a ridiculous “halftime show” with former Bush aide Matthew Dowd), the debate ran about 90 minutes, and for almost all of that time it didn’t even feel like Perry was there. Especially in the first hour, the gaps between his opportunities to speak were endless, with Perry more often showing up on the screen in the background while one of his opponents was talking. And when he was actually called on, he did nothing to help himself, issuing dull, vague responses that seemed designed mainly to run out the clock.

Perry’s handling of the first question posed to him, about what he would do as president to break through Washington’s gridlock and improve the economy, was typical of his night. He simply noted that he’d issue a plan later in the week – he’s scheduled to give a speech on the economy on Friday – and made some generic comments about domestic energy sources. Moderator Charlie Rose observed that Romney long ago offered a 59-point economic plan and challenged Perry to be more specific. Perry simply noted that Romney has been running for president for several years, “and I’ve only been at this for about eight weeks.”

The lack of preparation, to say nothing of Perry’s limited agility, was staggering. The sole topic for the debate was the economy, and Perry was surely aware of how high the stakes were for his candidacy. And yet all he could say was that he’d soon have a plan?

Meanwhile, Romney spent the night confidently and energetically plowing through his familiar denunciations of Barack Obama, promoting himself as a savvy businessman come to rescue America from the Great Recession. And Cain, with similar confidence and energy, returned over and over to his “999” tax plan, eliciting frequent cheers from the crowd. In fact, at one point Rose even played a clip of Cain talking up his trademark plan and asked the other candidates to respond. The best Perry could muster was that “what we need to be focused on in this country today is not whether or not we’re going to have this policy or that policy.” He never seemed so small and insignificant.

The best news for Perry is that this was probably the least-watched GOP debate yet, airing on Bloomberg television (and a broadcast station in New Hampshire). But the GOP’s opinion-shaping class surely tuned in, and Perry gave them no reason to declare his candidacy reborn – even as Romney gave them further reason to call him the front-runner, and Cain gave them plenty of reason for them to say he’s for real.

It’s true that Perry still has a ton of money and that in the volatile environment of the current GOP race he could still reverse his fortunes with a strong performance in the next debate (which will be next week). It’s also true that Cain has essentially no campaign organization, has barely paid attention to the early primary and caucus states, is living almost entirely off media attention and buzz right now, and has yet to face a concerted assault on the 999 plan from his rivals (it’s coming, though). Given the GOP base’s resistance to him, it’s hard to imagine Romney just walking off with this race by default; someone’s going to emerge and give him a run, and it still could be Perry.

But it doesn’t have to be, and Tuesday night provided the best reason yet to doubt that it will be. Perry just doesn’t seem capable of performing well in these settings. He’s now shared the stage with his opponents four times, and each time he’s walked away with his stature reduced. In the three previous debates, he delivered performances that were simply unworthy of a front-runner. At least on Tuesday, he delivered one more on par with his poll numbers.