Updated: A laughably bad attempt at linking the protest movement to a liberal boogeyman 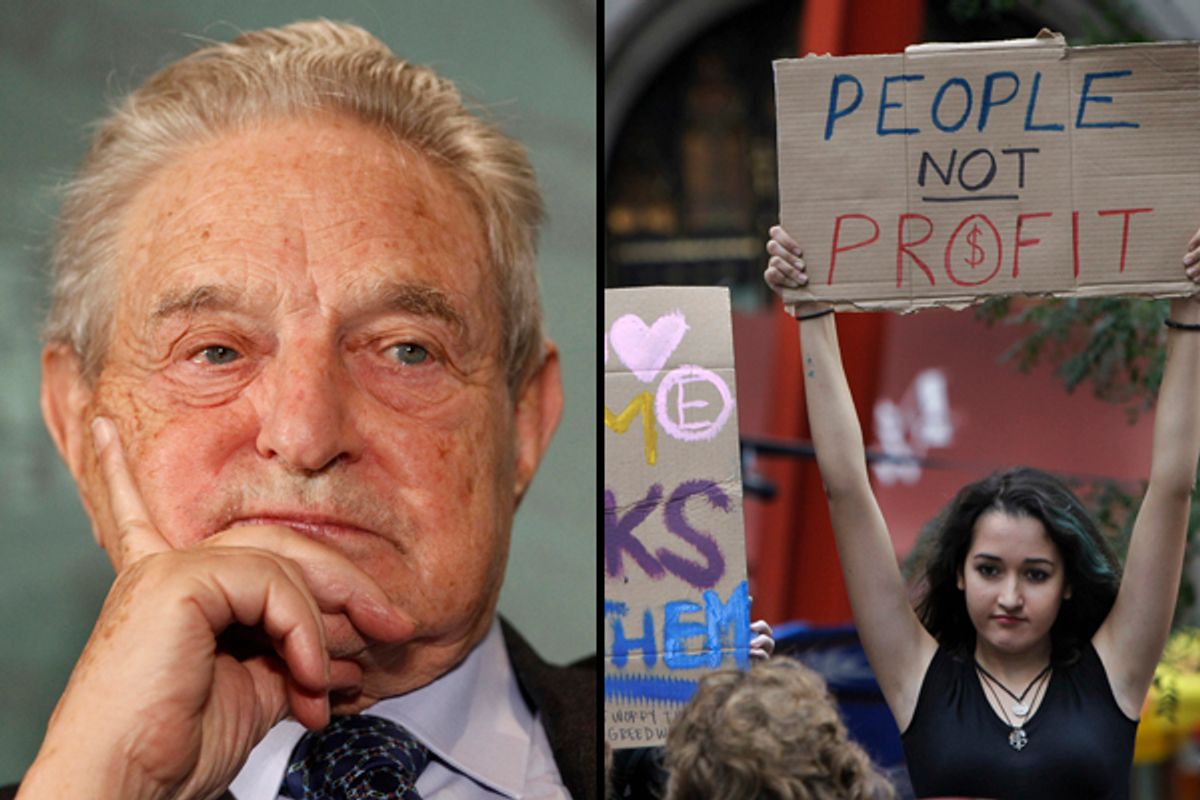 [UPDATED BELOW] Who is responsible for Occupy Wall Street? Is it a protest initially organized by longtime anti-consumerist magazine Adbusters that grew in size and scope (with the support of members of the Anonymous collective) due to widespread frustration about economic injustice, leading organized labor and other left-wing groups to sign on in solidarity? Yes. But for some journalists, that is a very boring answer. So Reuters attempts to "follow the money" (there is not really that much money involved; it's not like they've launched a targeted ad buy or something), leading them straight into Glenn Beck nonsense-land. It turns out that Occupy Wall Street... is funded by George Soros!

Mark Egan and Michelle Nichols have written a very sloppy piece that starts off saying "Soros Soros Soros" but then basically admits that it can't really justify making the connection. It begins:

Anti-Wall Street protesters say the rich are getting richer while average Americans suffer, but the group that started it all may have benefited indirectly from the largesse of one of the world's richest men.

OK, the formulation there implies some sort of hypocrisy, but how is they claim the existence of economic inequity, but a rich person may have helped them remotely contradictory, exactly? What a lame attempt at a gotcha. "The protesters claim there are tens of millions of Americans out of work but some of them have had jobs."

There has been much speculation over who is financing the disparate protest, which has spread to cities across America and lasted nearly four weeks. One name that keeps coming up is investor George Soros, who in September debuted in the top 10 list of wealthiest Americans. Conservative critics contend the movement is a Trojan horse for a secret Soros agenda.

Hm. Does that name "keep coming up"? Just randomly, passively appearing from the ether? "George Soros" in a little cartoon speech bubble repeatedly materialized over lower Broadway, and these intrepid reporters couldn't help but notice.

Here's the big claim that this entire piece rests on:

Here are those "indirect financial links": Soros donated a bunch of money to the Tides Foundation. The Tides Foundation gives grants to hundreds of progressive organizations and causes. It has given $185,000 in grants to Adbusters over the last decade. Ho ho! So Soros used Tides to mask his secret donation to Adbusters, right? That seems... improbable. Here's a PDF list of Tides Foundation grantees from 2010 alone. It's a 42-page document. You can download its grantee lists going back to 2004 here. Soros donated a bunch of his money to Tides because it broadly supports causes he supports, and the point of donating to Tides is that it does the work of finding worthy recipients of your money, so you don't have to.

So the financial "connection" is not that compelling. But I guess we still have the fact that Soros and the protesters "share some ideological ground" to justify publishing this. That's good enough for a Drudge link!

Aides to Soros say any connection is tenuous and that Soros has never heard of Adbusters. Soros himself declined comment.

"Aides to Soros say" that, because it is objectively true that the connection is tenuous. This is like some awful parody of how false objectivity skews news reporting at traditional press outlets. Either Reuters worked backwards to establish a Soros connection and then published the piece even when that connection proved to be laughably far-fetched or it shamelessly sexed up a very dry story about the origins of the protest by sticking Soros' name on top. Either way, not a good look.

Guess what? Thanks to Reuters, "Soros is secretly responsible for Occupy Wall Street" will become an official right-wing "fact" about the movement, forever.

UPDATE: Reuters totally rewrote and "fixed" the story, writing in the very first sentence that George Soros does not fund Occupy Wall Street. (They must've read my criticism, because they also added a quote from Rush Limbaugh invoking George Soros. So that is where that name kept coming up from! I was so curious.) One problem: No correction, no "update," no editor's note, no indication whatsoever that this isn't the first published version of the article. Which is... problematic, journalism-wise. I normally like Reuters! They're better than this. I'm honestly more confused than angry.