How can we be so sure that Herman Cain, who has just taken the lead in another new poll, has no chance of winning? 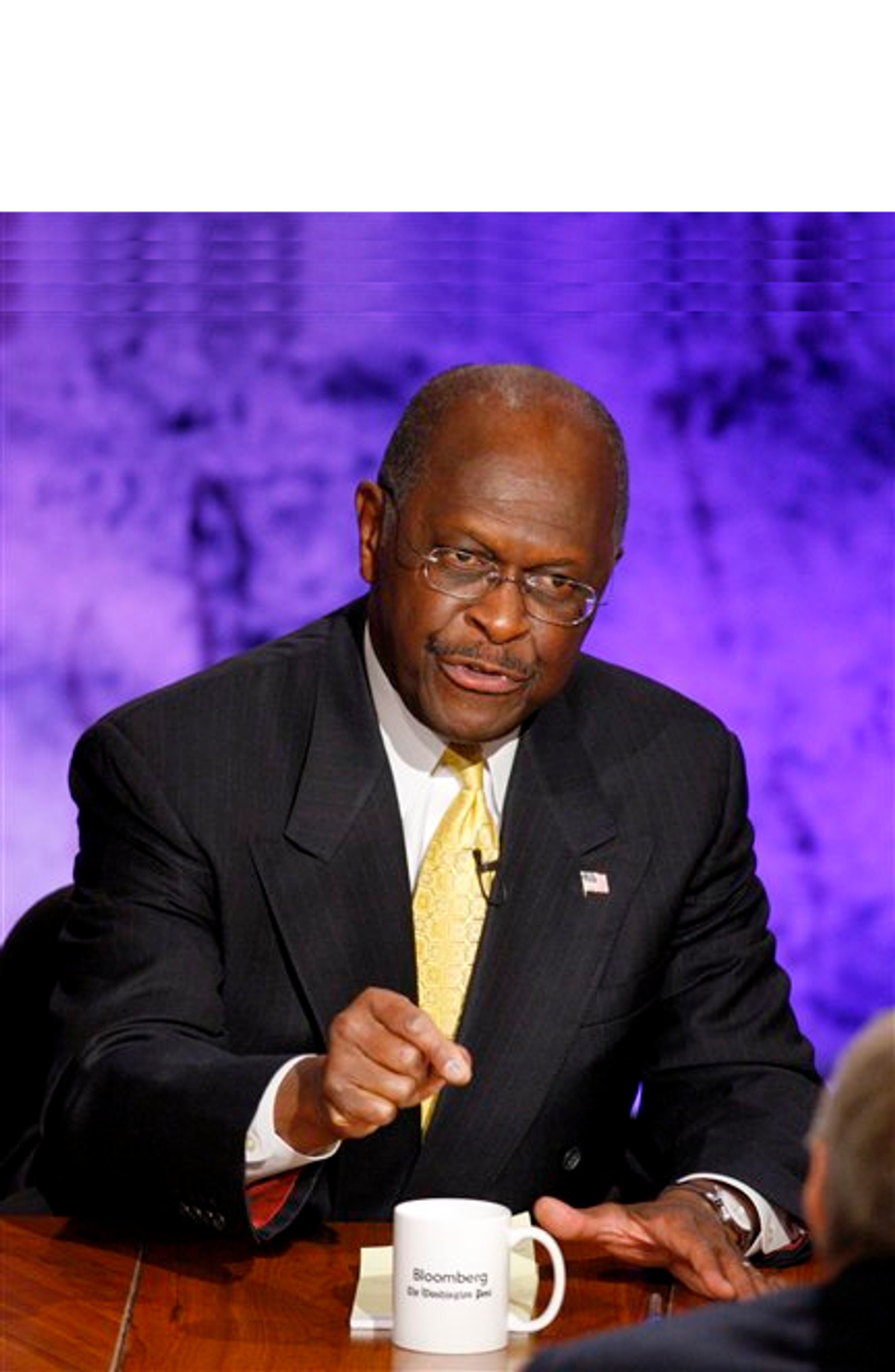 Welcome to Herman Cain's first full day as the front-runner* in the race for the Republican presidential nomination. Why the asterisk? Because while he's stormed into first place in national polls and in the most recent survey in Iowa, there's an almost unanimous consensus in the political world that he can't actually win the nomination.

An NBC News/Wall Street Journal poll released last night puts Cain at 27 percent nationally, with Mitt Romney at 23 percent and Rick Perry at 16. That represents a plunge of 22 points for Perry since the last NBC/WSJ survey in late August -- the exact same size as the increase in Cain's number from then to now. Romney's support, meanwhile, is exactly where it was; he's gained nothing from Perry's fall. The findings jibe with a PPP poll released earlier yesterday that also showed Cain surging ahead.

Cain's dramatic rise is evidence of just how resistant Republican voters are to the idea of nominating Romney, and just how disillusioned they've grown with Perry. At the same time, Cain has clearly impressed them with his confident and likable personality, fierce conservatism, and catchy "9-9-9" tax plan. That he's a black man who eagerly absolves the GOP's Obama-era base of any suspicion of racial animus may have something to do with his appeal too. Whatever the exact reasons, Cain is very popular among Republicans right now, and the race for the nomination has never seemed so volatile and wide open. So why is he being written off? From what I can gather, there six main reasons:

So that's the case against Cain as a serious threat to win the nomination. If it's worth anything, I can think of one other time when a candidate whose prospects were as widely dismissed as Cain's led the pack this close to the first contest. It was on the Democratic side at the end of 1987, about two months before the Iowa caucuses, and it actually involved two different candidates.

At the start of that month, a national poll put Jesse Jackson in first place with 25 percent of the vote, followed by Michael Dukakis at 10 percent. Then, a few weeks later, Gary Hart reentered the race (he had dropped out during a sex scandal back in May) and took the lead himself. But both Hart and (especially) Jackson were generally not treated as serious contenders. Jackson's lead was seen as a product of his name recognition (he was at that point far better known than the rest of the candidates) and because his negative ratings were so high, it was assumed he was already at or close to his maximum level of support. Hart was taken a little more seriously, but he also had high negatives and (like Cain now) essentially no campaign organization.

In the end, Hart received zero percent in Iowa and four percent in New Hampshire, dropping out shortly thereafter. Jackson actually put a scare into the party establishment, winning a bunch of southern states and scoring a shocking victory in Michigan, but then it became a two-way contest between him and Dukakis, and it wasn't close.

Cain's situation is a little different, though, because he's not as well-known -- even within his party -- as Jackson and Hart were and he actually has extremely low negative ratings among those who do know him. In other words, we're pretty much in uncharted waters here. So while there are plenty of logical reasons to assume that Cain will flame out (soon, probably), we can't really say we've seen this story before. Because we haven't.