They were big stars once -- so what are they doing in Joel Schumacher\'s latest empty schlock-fest? 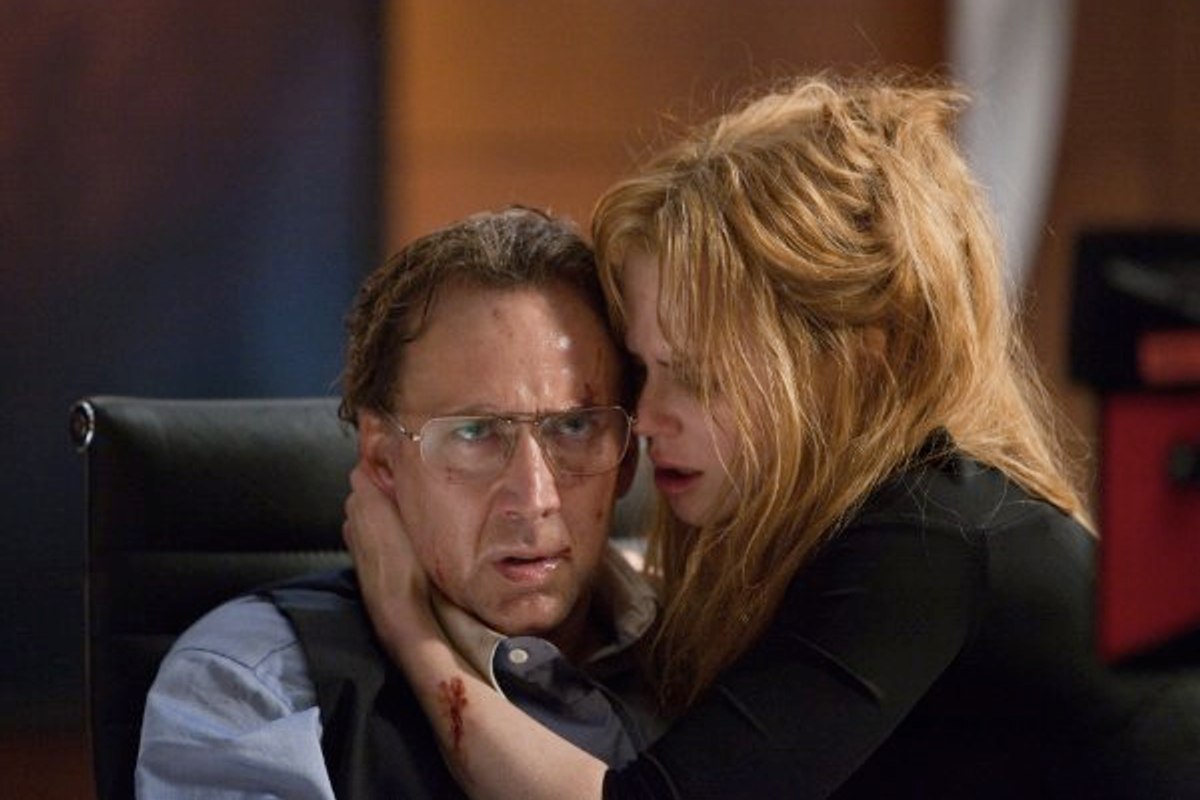 Can someone explain what Nicolas Cage and Nicole Kidman are doing in a chaotic and sadistic home-invasion thriller, shot in digital colors so radioactive they appear to have leaked out of the Fukushima nuclear plant? "Trespass" looks and feels almost exactly like a late-'90s straight-to-video release, right down to Cage's enormous aviator-style glasses and the gun-wielding, drugged-out stripper in lacy underwear. Indeed, this basically is a straight-to-video movie, in the 21st-century iteration; it's available right now on VOD nationwide, simultaneous with its limited theatrical opening, and DVD and Blu-ray release will follow almost immediately.

I would suggest that Cage and Kidman need new agents except for the obvious fact that, if Cage indeed has an agent, that person suffers from a dangerous manic disorder. (I do feel some compassion for Nicole Kidman, who now finds herself on the forbidding north slope of female stardom and overall has dealt with it pretty well.) No, stay thy comment-scribbling hand; my question was rhetorical, of course. This is a Joel Schumacher movie, which means that nothing about its internal workings or its place in the universe needs to make sense. Some of you may have encountered my longtime obsession with Schumacher before, and what is more, some of you share it. (Don't let's lie to each other, all right? This is a time for honesty.) He exemplifies a certain tradition of style, sincerity and total vacuity in American cinema that is almost perversely admirable. In a universe of cynical crap merchants, Schumacher is a gifted and passionate creator of crap. Actors love the guy -- by all accounts he's a tremendously nice fellow -- and decades worth of sleek, portentous, empty and often laughable movies have done nothing to change that.

Ever since he singlehandedly destroyed the post-Tim Burton "Batman" franchise with "Batman & Robin" in 1997, Schumacher has been working the fringes of Hollywood, churning out smaller-scale, independently financed projects. (These have included "Tigerland" and "Veronica Guerin," which by Schumacher standards are masterpieces of subtlety.) If his moralistic, quasi-pornographic prep-school drug fantasy "Twelve," released last year, marked a new apogee of unintentional Schumacher hilarity, "Trespass" is more like a knockoff Hollywood thriller, with its A-minus stars and its pretense of psychological intensity.

Oh, sure, it's got the aforementioned scantily clad crackhead stripper named Petal (Jordana Spiro) -- because that's exactly who you want to bring along when you're executing a precise, professional armed robbery -- and repeated shots of Twi-hunk Cam Gigandet dragging his dripping pecs and abs out of the swimming pool. But any idiot director can come up with stuff like that, and far too much of this movie involves people who are wearing clothes yelling at each other. Joel, I need you to take a break from your Pilates routine and sit with me quietly so we can talk. Is this how you wanted to spend your golden years: Working around the fact that Nicole Kidman won't get naked? I feel like you're not even trying, man.

Maybe I'm being harsh. There's a fair amount of Schumacherian goodness in "Trespass," but all of it's attached to one of those agonizingly stupid crime thrillers where the criminals and the hostage family constantly try to outdo each other in overwhelming incompetence. No one's scheme to escape ever works and technology unanimously fails, yet at the same time the thugs have no idea what they're doing and are easily duped. Cage's character, Kyle Miller, is some kind of hustler-type diamond middleman who's rarely home, and his wife, Sarah (Kidman), may or may not be having an affair. Their sullen teenage daughter Avery (Liana Liberato) sneaks out to a party with her trashy friend, so Kyle and Sarah don't quite notice that the "sheriff's deputy" who buzzes the outer gate of their heinous ultra-modern McMansion won't show his face to their security camera and is quite obviously a depraved lowlife with a van full of sociopathic accomplices.

That would be talented Aussie actor Ben Mendelsohn, somewhat enjoyable in a bad mustache and a balaclava as the sarcastic ringleader who turns out to be in control of almost nothing. His companions include the big, scary guy who just wants to rape, kill and plunder (Dash Mihok), the hunky but unstable guy (Gigandet) who keeps exchanging meaningful glances with Kidman -- and who keeps being asked, "So did you take your pills? Huh? Didja? Your pills? -- and the inexplicable stripper I have now mentioned three times. Since she is of little value in restraining or torturing Kyle and Sarah, she goes upstairs to hunt for narcotics and try on Kidman's clothes.

Now may be the moment to mention that Petal the stripper is almost the only aspect of this film's plot, situation and cast of characters that isn't drawn from "Kidnapped," the 2010 thriller by Spanish director Miguel Ángel Vivas. I'm assuming a non-sinister explanation for this, for the moment, even though Karl Gajdusek's screenplay for "Trespass" is not credited to any original source material and there seems to be no official connection between the two movies. But I hope nobody's going to pretend that the similarities are coincidental: Both movies have essentially the same six antagonists in the same isolated gated-community setting, both feature the black-comic murder of an officious rent-a-cop who shows up at the wrong moment, both eliminate one of the bad guys in a timely car accident.

But while "Kidnapped" is a lean and mean, ultra-formal movie about class warfare (which features just 12 shots, Béla Tarr style), "Trespass" is just an incoherent mess (and features, I don't know, 473 shots). It's actually one of Cage's more restrained sweating-and-staring performances, since Kyle spends most of the movie absorbing various injuries and trying to out-think his admittedly idiotic assailants, who either want diamonds he doesn't have, money he claims to have spent or maybe just one of his kidneys. There are a lot of perfume-commercial shots of Kidman in diaphanous white gowns, covetously eyeing Gigandet's hellacious bod, or possibly just marveling at his enormous jaw. There's also a nail gun and a syringe full of paralytic death-row juice, and don't worry, they both get used. I'd tell you to shoot yourself up with that stuff and stay on the couch, but the problem is that this movie plans to invade your home and make you watch it.

"Trespass" opens this week in major cities and is also available on-demand from many cable and satellite providers.