Mitt has a Rush Limbaugh problem

... and it tells us an awful lot about the evolution of right-wing politics in the Obama era 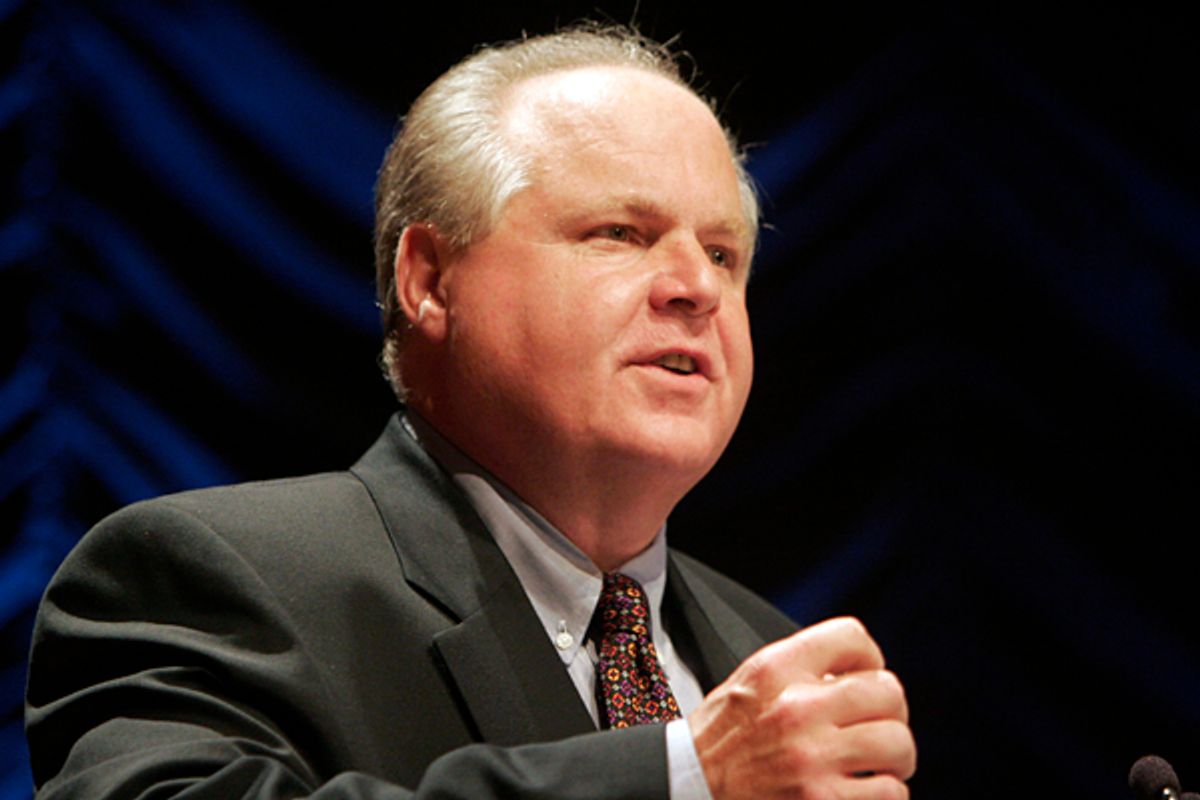 When Rush Limbaugh goes on the air this afternoon, Mitt Romney's opponents might want to tune in. Because if Limbaugh's final broadcast of the week is anything like the two that came before it, he's going to be giving them some serious ammunition.

The past few weeks have felt like something of a turning point in the GOP race, with Chris Christie and Sarah Palin both declining to run, Rick Perry completing his decline from clear front-runner to just another guy on the stage, and Romney finally starting to reel in some of the party's heavy hitters who'd been on the sidelines. The catch is that actual Republican voters are proving stubbornly resistant to Romney, who remains stuck in the low- to mid-20s in national polls, even in the face of Perry's collapse. And to the 75 percent or so of GOP voters who still refuse to back Romney, Limbaugh has delivered an emphatic message these past few days: Keep resisting!

On Wednesday, the day after yet another debate in which Romney turned in a strong performance and his rivals failed to lay a glove on him, Limbaugh insisted that "Romney is not a conservative. He's not, folks. You can argue with me all day long on that, but he isn't." He pronounced himself thoroughly unsatisfied with Romney's efforts to distinguish his own Massachusetts healthcare law from President Obama's and suggested Romney wouldn't uphold conservative principles as president in the face of pressure from the liberal media and "Democrat members of Congress."

Then yesterday he warned that Romney and his establishment allies are seeking to move up the dates of early primary contests because "they know that he's vulnerable" to attacks from a right in an extended campaign. There's not actually anything to Limbaugh's claim; New Hampshire's (almost certainly empty) threat to move its primary to December is rooted in the state political establishment's bipartisan desire to preserve its first-in-the-nation status. But by hinting at a sneaky plot, Limbaugh simply reinforced the doubts that he's been trying to stir. He also went after "RomneyCare" again, ridiculing Romney's standard talking points on the matter. "Romney saying, 'If Obama had just talked to me, I could have spared him,' is like Bill O'Reilly saying, 'If Al Gore had just come on The Factor he'd be president today,'" Limbaugh cracked.

The immediate significance of this is obvious. Limbaugh is the most listened-to conservative radio host in America, with an audience that includes no shortage of Romney-skeptical Republicans. So the more Limbaugh pushes against him, the harder it will be for Romney to shatter the 25-30 percent ceiling that he's faced all year.

If there's good news for Romney, it's that Limbaugh doesn't seem to have a favorite among his rivals. He's expressed disappointment in Perry ("I don't know that he knows yet how to run for president, run for the office of president"), and while he has flirted with Herman Cain, Limbaugh was also quick to attack him for his initial response to the recent story about a racially insensitive word that was at some point visible at Perry's hunting camp. Limbaugh's dilemma mirrors that of every anti-Romney Republican: With Perry fading, there's no obviously credible alternative in the field for them.

What may be more interesting about Limbaugh's crusade is what it reveals about the psychology of the Obama-era right. You probably wouldn't know it from what he's saying now, but Limbaugh pretty much endorsed Romney when he ran four years ago. The big moment came as Romney was fighting for survival, fresh off a near-miss in Florida and needing a big day to prevent John McCain from running away with the GOP race. Limbaugh announced to his listeners that at the start of the campaign he hadn't believed that any of the candidates represented the three legs of the conservative stool stool (national security, social issues and fiscal policy), but that he'd changed his mind:

I think now, based on the way the campaign has shaken out, that there probably is a candidate on our side who does embody all three legs of the conservative stool, and that's Romney.

The important thing to note here is that Limbaugh said this even though RomneyCare and the individual mandate at the heart of it had been on the books in Massachusetts for nearly two years.

It's funny when you think about it. Limbaugh is currently pleading with his listeners not to be fooled by Romney's claims that his law is different than Obama's. On yesterday's show, he played clips of one of Romney's healthcare advisers explaining why the laws are essentially identical, then told his audience, "This issue is not going to go away." But Romney's law was well-known in 2008, when Romney didn't exactly shy away from promoting it, and yet it didn't keep Limbaugh from pronouncing Romney the embodiment of conservatism.

This illustrates perfectly how irrational and hysterical much of the right's response to Obama's presidency has been. The individual mandate is actually a concept with deep conservative roots, one that numerous congressional Republicans touted as an alternative to Bill Clinton's reform proposal in 1994. This is why Romney had no trouble finding a representative of the Heritage Foundation to join him on stage when he signed his law in 2008. And it's why that law just wasn't a big deal to Limbaugh and most other conservative opinion-shapers back in 2008 -- and why it only became a problem for Romney when Obama embraced it at the national level.

It's not that hard to imagine an alternate universe in which Romney somehow won the White House in 2008, then muscled through a national version of his Massachusetts law -- with Republican support. But it was Obama who won, and when he tried to do the same thing, virtually every Republican in America accused him of destroying capitalism. As Jonathan Bernstein put it, it seems that to the right the Affordable Care Act isn't socialism but that Obamacare is.