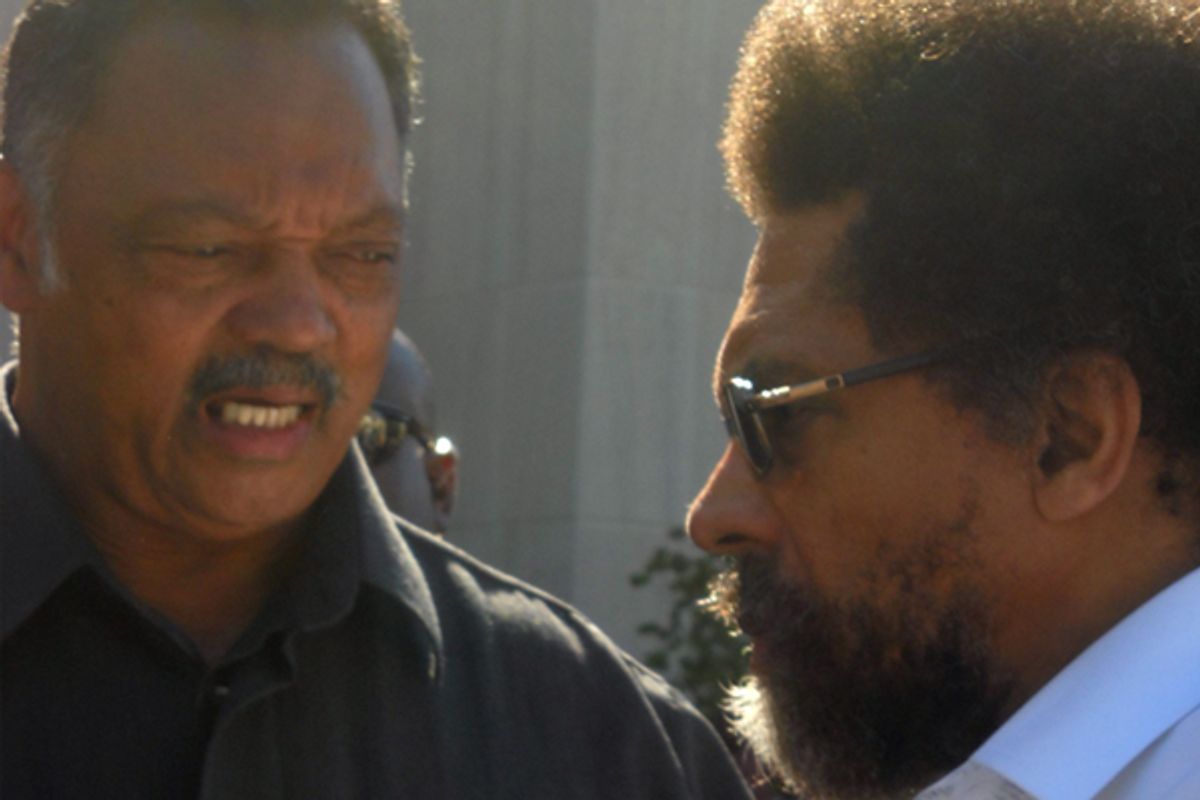 Nineteen OccupyDC protesters who emerged from an overnight stay in Washington  jail this afternoon were greeted by the veteran civil rights leader Rev. Jesse Jackson. Among the freed detainees were Princeton professor Cornel West and Grammy-nominated singer Raheem DeVaughn, who embraced Jackson as a drum-beating crowd of supporters chanted, "We are the 99 percent."

"Our message is that this is a movement that is leader-less and leader-full," said West, who was arrested Sunday for displaying a sign on the grounds of the Supreme Court. "We take very seriously the idea of lifting every voice and we listened very closely to the people who we met inside the racist criminal justice system."

The emotional meeting in front of the Carl Moultrie Courthouse symbolized how divergent traditions in American protest have converged in the occupation movement.

The 19 people detained belong to a movement of veteran leftist activists called October 2011 who had had been planning to launch a campaign of civil disobedience out of Washington's Freedom Plaza since last spring. Their ranks include members of well-established protest groups like Code Pink and Veterans for Peace.

Their ranks have been swelled by the occupation of nearby McPherson Square, where a younger crowd of social media activists inspired by Occupy Wall Street has established a tent city called Occupy K Street. More ethnically diverse than the older activists, these occupiers speak the language of hashtag and "mike checks" and sometimes express skepticism about the capital's professional reformers.

"For us, this isn’t about having a rally and going home in your Prius to have a cabernet," said one burly occupier who didn't want his name used.

The two camps, each of which has about 50 tents, now communicate through a liaison committee. While members of both acknowledge some tensions, October 2011 leader Kevin Zeese says that newcomers have been inspiring to him.

"The 99 percent concept is brilliant," said Zeese, admitting his group's civil disobedience forays at sites around the city might have gone unnoticed if it were not for the occupation movement

Jackson, who spoke at the dedication of the Martin Luther King Jr. memorial on Sunday, linked both groups to the slain civil rights leader.

"Martin's last act was an occupation of Washington," Jackson said outside the courthouse, recalling the 1968 Poor People's March, which occupied the National Mall for two months. "He wanted to call attention to injustice with the drama of jail-going sacrifice, same as these people. People say this is new, but to me it's just part of  a 40-year movement."

The veteran civil leader's advice for the occupation movement was simple: "Do more outreach to include more people and more leadership styles. Keep on working to expand the base."

Jackson dismissed complaints that the occupation movement has no agenda.

"If the protest remains disciplined, nonviolent and focused," Jackson said, "action will follow."

Charges against the 19 protesters were dropped with prejudice, according to Zeese, meaning charges could be revived if the protesters are arrested on the same charge in the future.

West and the other demonstrators did not dismiss the possibility.

"I feel like part of the 99 percent," said DeVaughn, whose song "Woman" was nominated for a Grammy in 2008. "I did it for my mother who can't get full Social Security and for my father who's fighting cancer. Yeh, I would do it again. But if I do, I'll bring more comfortable shoes."