Sheriff Joe and Herman Cain find each other 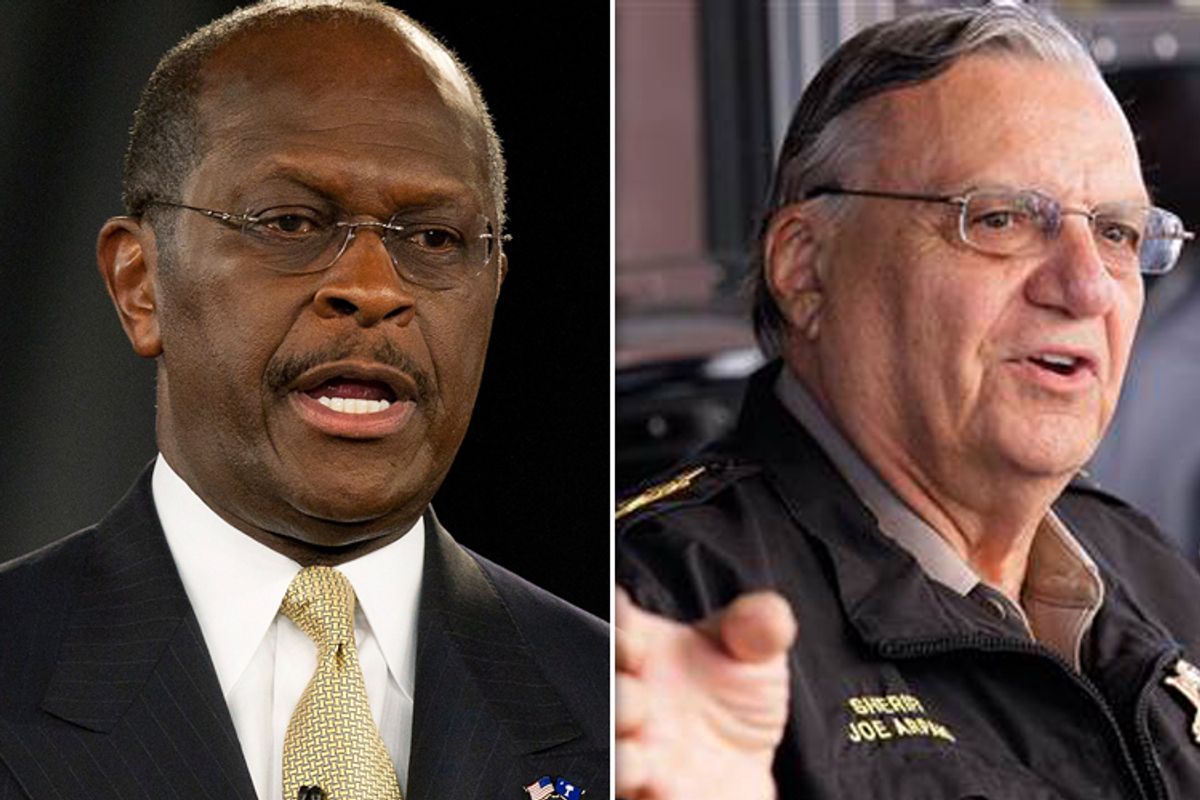 Herman Cain likes to make a lot of "jokes" on the campaign trail, about how he'd "defend" America's border with Mexico. For a while, it was going to be alligators protecting us from Mexicans. This weekend, Cain decided a better joke was an electrified border fence, in order to electrocute all the illegals to death. (Funny!) Not a joke, presumably: Cain's proposal to use military troops "with real guns and real bullets" to ... shoot immigrants, to death.

Cain is talking a hard line on immigration because that sort of talk appeals to rabid conservatives. It is even more attractive an issue for a candidate like Cain because establishment Republicans like Mitt Romney (and Rick Perry) have spent a number of years trying to actually win Hispanic votes, forcing them to ... moderate their language and policy proposals. Cain has no pressing need to moderate his message on any issue, because he does not expect to actually be the Republican Party's presidential nominee. (See also: Why Cain felt comfortable being the official candidate of totally undisguised bigotry against Muslims, as a means of attracting attention, earlier this year.)

Cain, working to appeal solely to the id of the GOP base, is now meeting with one of the movement's folk heroes: Sheriff Joe Arpaio, the semi-competent cartoon lawman who not long ago cynically trained the entirety of his office's resources on constantly persecuting immigrants, will hold a press conference with Cain today, following a fundraiser.

Arpaio already praised Cain on CNN this morning. Remember the dumb joke about electrocuting immigrants? This is what that joke said, to Sheriff Joe:

Arpaio responded, "Oh, I’m sure he was joking, but it probably means that he’s taking it serious to do something at the border and stop the illegal immigrations." He added that he did not oppose a fence, but that he would "like to see people go to jail, not give 'em a ride back to Mexico."

Arpaio is a creature who feeds on publicity. With Bachmann having collapsed, he will feed off of a surging Cain. Once Cain fades, Arpaio will latch on to Romney or Perry. In the meantime, expect a lot more tough talk from Cain, about just how much he'll hurt those bad, bad immigrants.

Occupy Phoenix will be at Cain and Arpaio's press conference, it looks like, which ought to make it a little more interesting.