A confrontation in Washington's Freedom Plaza shows how a movement grows 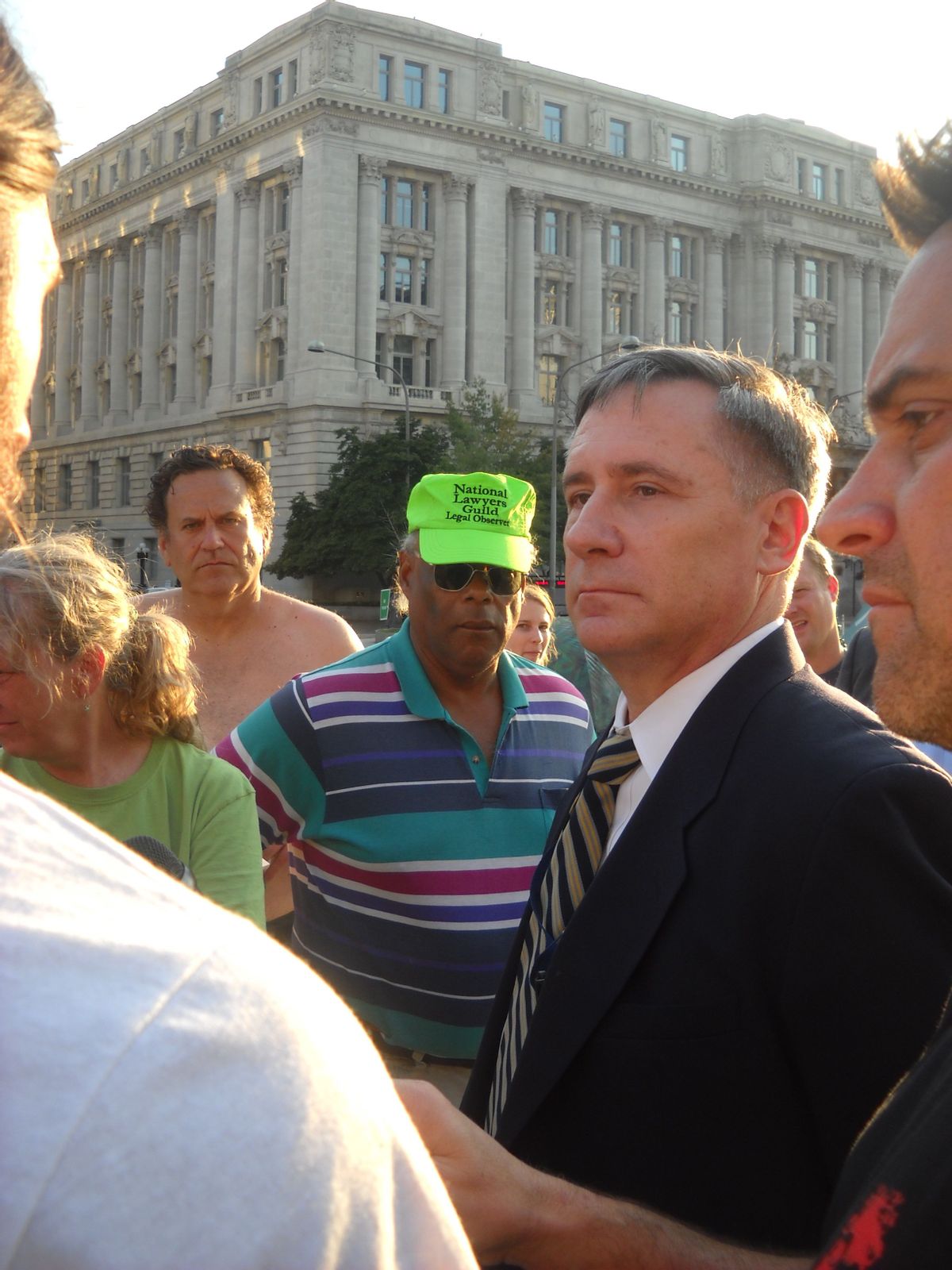 Two confrontations at the Occupy DC sites in Washington on Tuesday showed the movement grappling with — and enlarging — its understanding of free speech. While there is no reality to the right-wing media attacks on the movement as "anti-Semitic" (the McPherson Square occupation had its own sukkah for celebrating the Jewish holiday of sukkot), occupiers increasingly find themselves confronted by critics in person. How the protesters responded in these two cases showed how the movement grows, not in numbers but in spirit.

Things got hot at the occupation site in Freedom Plaza two blocks east of the White House around 6 o'clock on Tuesday. As a small group of veteran activists sat discussing their plans to disrupt local branches of CitiBank (which announced that its quarterly profits were up 76 percent over a year ago), a man in a blue blazer planted himself just outside their circle of chairs.

"I don't have to tell you my name," said the man, who held his hands behind his back. He was wearing a work identification lanyard emblazoned with the words "National Intelligence University." Later he identified himself as "Kevin."

The other activists surrounded him.

"You have to identify yourself to participate in the discussion," Trainor said. "I do not," Kevin replied with a jutting jaw. "I'm here to listen. This is a public space."

"You're blocking my access to a public place," Kevin retorted. "This is Freedom Plaza. Your behavior is exactly like what you're protesting."

A heated debate ensued as Kevin stood chin to chin with Trainor for close to 10 minutes. While some of the activists asked him if he was a spy ("No"), and insisted they had the right to keep their meeting private, others in the gathering crowd started siding with Kevin.

"He doesn't have to identify himself," said Cliff Morton, a member of the occupation wearing a National Lawyers Guild cap. "He can do what he wants. This is a free space."

"If you want to have a private meeting, go someplace else," someone said. Before long Collin Knox, a member of Occupy DC's outreach committee, was telling me he regretted the confrontation. By the time the girl with the "Free Hugs" sign came around, tempers were cooling. Tetaz, a 78-year-old retired schoolteacher, pushed through the crowd and apologized, saying, "I wrongfully responded in a confrontational manner."

"Thank you," Kevin said, obviously satisfied with proving his point. "Thank you."

I asked Kevin if he could identify with the occupation movement.

"With some aspects, yes," he said. "But there's some assumption that I'm a conservative because I'm wearing a suit."

One of Kevin's supporters in the crowd was another man in a suit who identified himself only as Jeff.

"You'd probably call me a right-wing Republican," he told me. "But I agree with about 90 percent of what they're saying here. We have to get beyond this partisan division that says Democrats hate Republicans and Republicans hate Democrats. Their just saying that keeps us divided."

The ethos of the occupation movement is "nonviolent communication," Bob Wentworth, of the Capital Nonviolent Committee, told a circle of a dozen people at the nearby McPherson Square occupation earlier in the day. "We don't want to use force, even in our language."

The McPherson Square occupation, located four blocks away, is younger, more diverse and more mellow than the Freedom Plaza occupation. There's less talk of  civil disobedience and more discussion of talking about politics in a new way.

Wentworth's earnest presentation was interrupted by a man smoking a cigarette

"Did you use force at the Air and Space Museum the other day," he asked.

"That wasn't us," objected an older man seated on the grass. "That was a right-winger from the American Spectator who bragged about it on his blog."

"Is it using force to illegally occupy a public park?" the man barked.

"The police have no objection," someone said. "Not yet," he replied. When asked a question about what he wanted, the man responded with more questions and soon stalked off.

Wentworth asked his listeners for their reaction.

"He's a disrupter," said one. "There's no talking to him." A woman said, "He didn't hear anything we said."

"If he can't hear you," Wentworth observed, "it's likely that he feels he can't be heard." He urged the crowd not to think that such antagonists were beyond reach. "Try to identify what is emotionally charged in his thinking and sympathize with his needs."

That sounds hopelessly touchy-feely, but in the case of Kevin it actually worked.

As the sun set on Freedom Plaza, Kevin stuck around for the occupation's daily general assembly where the confrontation was debated by about 50 people. One of the activists floated a proposal to deal with people like Kevin who sought to listen in on meetings without identifying themselves by escorting them away. The assembly voted it down. A woman proposed that such interlopers be given a hug and a kiss and removed. The assembly voted it down.

"This is a public space," said a man in a wheelchair. "The best thing to do is nothing." On that point there was unanimous consensus, and a few minutes later Kevin wandered away. Occupy DC had listened and learned.