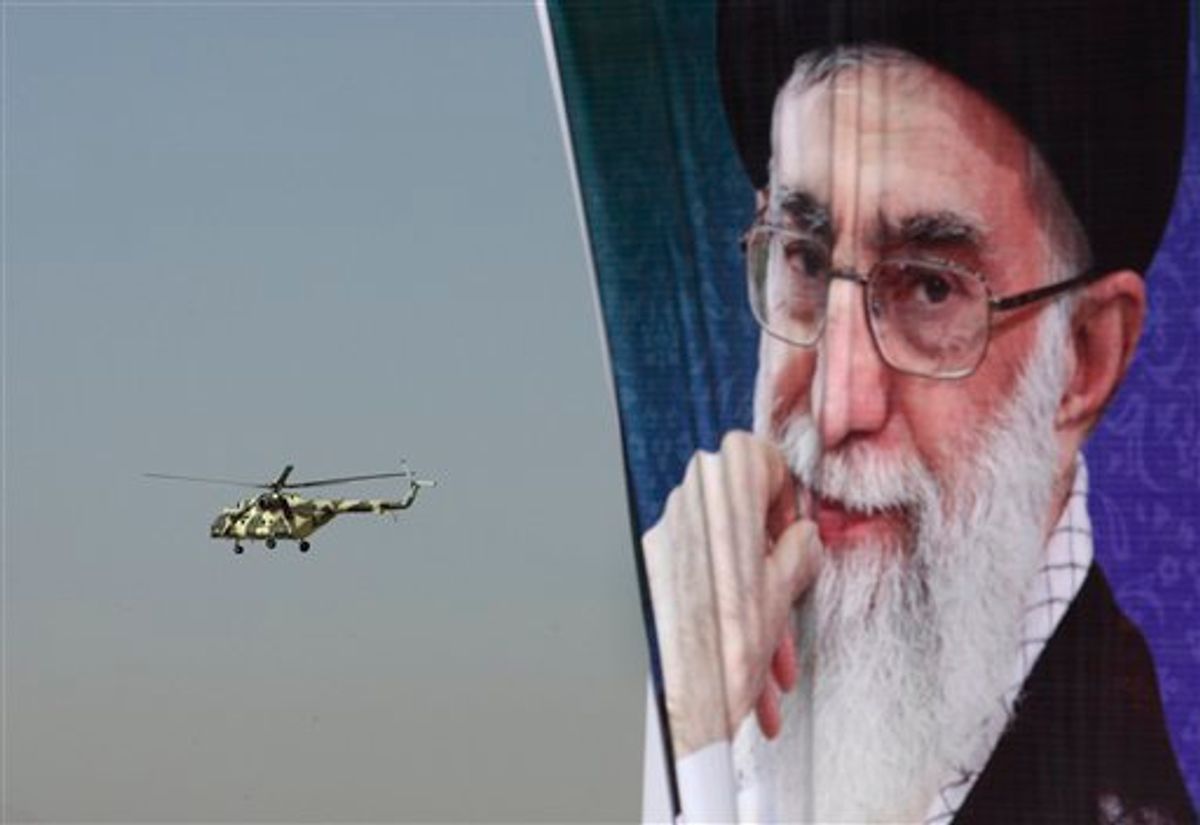 Iran has been hypocritical when dealing with the Arab Spring -- their ability to prop up the Syrian regime when they are killing their own citizens. Increasingly, the international community will consider [that] out of bounds and punish Iran.

A top U.S. diplomat confirmed Tuesday the United States has finalized a $53 million weapons deal with the Persian Gulf Kingdom of Bahrain.

How can those hypocritical Iranian monsters stand up in public and praise the Arab Spring while propping up a regime that kills its own citizens for demanding democracy and even imprisons doctors for the crime of treating injured protesters? As President Obama pointed out, "the international community will consider [that] out of bounds and punish" whoever does it. Meanwhile:

In the aftermath of the American military strike that killed wanted al-Qaeda operative [sic] Anwar al-Awlaki, the U.S. government has turned up the volume on its praise for the embattled government of Yemen.

"This success is a tribute to our intelligence community and to the efforts of Yemen and its security forces who have worked closely with the United States over the course of several years," President Obama said in remarks about the assassination of the terrorist leader [sic].

Eleven people were killed Tuesday during clashes with Yemeni security forces after anti-government protests again filled the streets of the country's capital, according to a hospital official.

Crowds marched through downtown Sanaa, where government forces allegedly gunned down protesters -- the latest in a series of confrontations between those loyal to embattled President Ali Abdullah Saleh, demonstrators and rival factions.

[And note, as As'ad AbuKhalil points out, that "when a pro-US dictator kills protesters it is 'fighting', and when a non-pro-US dictator kills protesters it is considered a massacre, according to Western media standards," even though "it is a massacre in both cases"; compare, for instance, "Syria's Ramadan Massacre" to "Street battles raged for a third day on Tuesday in Sana, Yemen’s capital" and "Eleven people were killed Tuesday during clashes with Yemeni security forces " and "Bahrain Fighting Moves from Roundabout to Villages".]

We also have this, from the official White House site:

President Obama spoke to King Abdullah of Saudi Arabia today . . .  the President and the King reaffirmed the strong partnership between the United States and Saudi Arabia.

That would be a "strong partnership" with the regime that sent troops to Bahrain to support that regime's crushing of citizen protests and that continues to provide vital support to Yemini President Saleh as he repeatedly kills his own protesting citizens, to say nothing of its own still extreme domestic repression (it's also to say nothing of the Obama administration's drone killing of several teenage boys in Yemen this week who were related to Anwar Awlaki, including Awlaki's son, a natural-b0rn U.S. citizen). When President Obama stands up and condemns Iran for rhetorically supporting the Arab Spring while simultaneously propping up regimes that crush it with violence, does he actually expect anyone other than American media outlets to avoid noticing all of this?

Rachel Abrams Adams is the wife of Reagan and Bush 43 neocon official Elliot Abrams, the daughter of Midge Decter and step-daughter of Norman Podhoretz, as well as a member of the Board of Directors of the "Emergency Committee for Israel," the group founded by Bill Kristol and run by Noah Pollack to attack any American politician displaying less than absolute fealty toward Israel. On her blog yesterday, this is what this member of America's leading royal neocon family wrote about the exchange of prisoners between Israel and Hamas (via Andrew Sullivan):

Then round up [Gilad Shalit's] captors, the slaughtering, death-worshiping, innocent-butchering, child-sacrificing savages who dip their hands in blood and use women—those who aren’t strapping bombs to their own devils’ spawn and sending them out to meet their seventy-two virgins by taking the lives of the school-bus-riding, heart-drawing, Transformer-doodling, homework-losing children of Others—and their offspring—those who haven’t already been pimped out by their mothers to the murder god—as shields, hiding behind their burkas and cradles like the unmanned animals they are, and throw them not into your prisons, where they can bide until they’re traded by the thousands for another child of Israel, but into the sea, to float there, food for sharks, stargazers, and whatever other oceanic carnivores God has put there for the purpose.

I generally avoid as unproductive Nazi comparisons in politics -- especially when it comes to the Middle East -- but if this isn't a pure expression of the Nazi mindset of hatred, bigotry, dehumanization, and yearnings for genocidal extermination, then nothing is. This isn't from some fringe Arab-hating figure but from the heart and soul of the American neocon movement.

The current schedule for the book tour for my new book, to be released next Tuesday, October 25, is now posted here.