"Margin Call": Inside the dreaded 1 percent

Kevin Spacey, Paul Bettany and Demi Moore star in a chiller about the insiders who caused the 2008 collapse 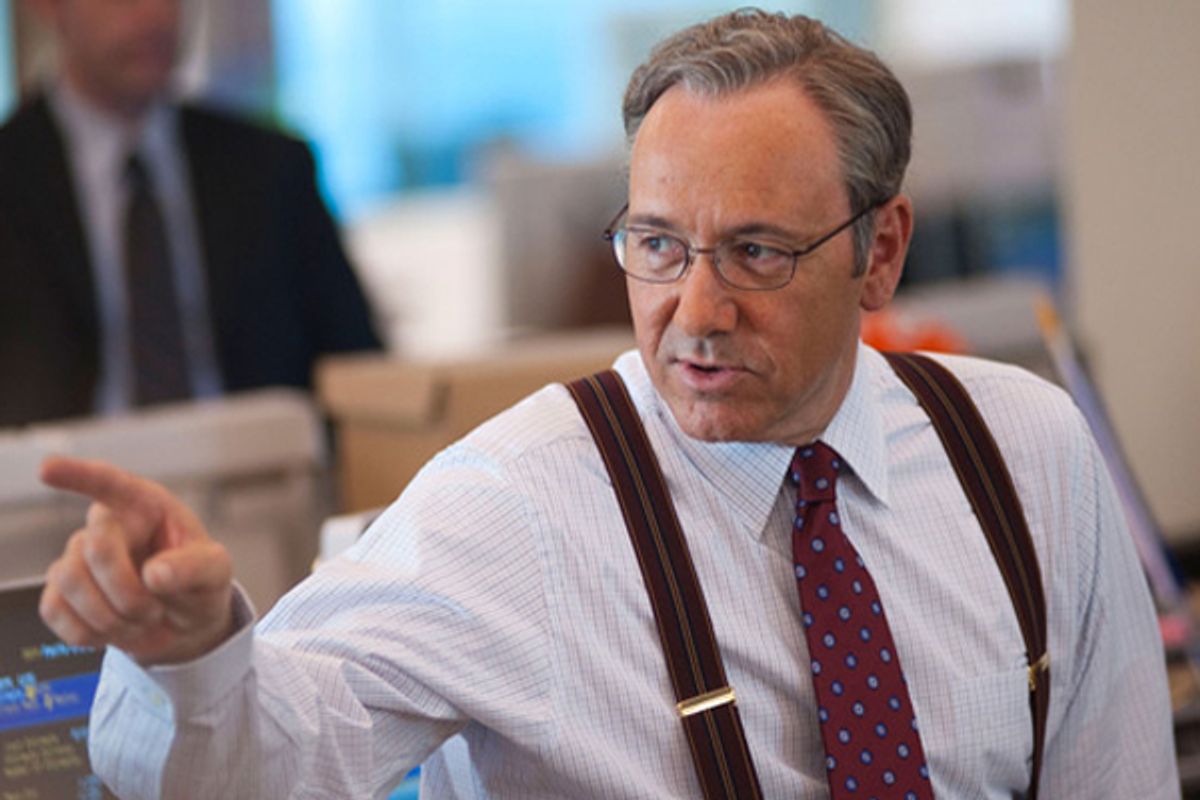 One friend of mine couldn't resist a little acrid commentary when she heard about the premise of "Margin Call," a feature film that follows 24 frenzied hours inside a fictional New York investment bank during the great financial collapse of 2008. "Oh, great," she snarled. "Now we're supposed to feel human compassion toward the lizards who screwed the whole world?" (OK, the words she used were not "lizards" or "screwed.") Thankfully, the answer to her question is yes but also no. Writer-director J.C. Chandor's impressive debut film does indeed capture its cast of high-powered bankers as human beings, and features one of Kevin Spacey's best screen performances as the firm's middle-aged ace salesman, trapped between his longtime loyalty and his waning sense of ethics. But explaining how these guys justified their rapacious and immoral behavior to themselves is not the same thing as excusing it.

There's a modest but growing library of movies that either soul-search the dark national mood or try to answer the "how did we get here?" question, and a few that try to do both. Largely, of course, I'm talking about nonfiction films like Charles Ferguson's righteously angry "Inside Job," which looks in retrospect like an Occupy Wall Street call to arms, or "The Corporation," a prescient and remarkable documentary from the Canadian duo Jennifer Abbott and Mark Achbar that didn't get much of a look on its 2004 release and very much deserves a new life. Here's what I wrote about it back then: "This is a radical and didactic work, and its premise at first may seem outlandish: The modern corporation, which has been legally endowed with many of the rights and conditions of personhood, is in fact a psychopathic personality, constitutionally incapable of doing good or caring about others. But the longer you sit and watch the movie, the more irresistible the conclusion becomes."

That makes an excellent backdrop for "Margin Call," which captures a group of men (and one woman, an excellent if modest role for Demi Moore) who are neither good nor evil in themselves, dealing with a rapidly unfolding crisis against a context of total ruthlessness and amorality. There are definite structural and thematic similarities between "Margin Call" and John Wells' "The Company Men" from last year, in that both are stagey Recession-era guy dramas shot in office buildings with all-star casts, and lots of shots of people packing up personal effects while the security guard waits for them. But Wells' movie is prodigiously sentimental in its portrayal of masculinity and work, and suggests that working outdoors with Kevin Costner is the salve for America's wounded manhood. (In real life, as some of my readers pointed out, Costner's struggling Boston contractor would hire undocumented Mexican immigrants at minimum wage, not an unemployed corporate sales dude accustomed to pulling down 150 G's.) The guys in Chandor's movie, on the other hand, long ago signed away their souls, and the devil doesn't take backsies.

There's a key scene in "Margin Call" that could just as well be in "The Company Men," or for that matter in some half-forgotten Arthur Miller play. Stanley Tucci, as a risk management analyst the bank has just fired, sits on the stoop of his Brooklyn Heights brownstone with Paul Bettany, playing a laddish enforcer type with a Cockney drawl who is Spacey's sidekick. Tucci's character, Eric Dale, explains that he used to be an engineer, and once built a bridge between two towns in Ohio and West Virginia that saved thousands of people thousands of hours and thousands of gallons of gas, and quite likely saved a few lives as well. Bettany's character, Will Emerson, listens attentively, but they're both looking at Eric's past from a bemused distance, across a wide, deep and fast-moving river, and there's no need to attach a moral codicil to the story. They're warrior priests in a secret brotherhood now, those who enrich themselves and a tiny handful of other people -- the 1 percent, in contemporary parlance -- by pushing numbers around in a highly specialized fashion. Very shortly, Eric will agree to return to the firm, as he puts it, to sit quietly in a room at a rate of more than $176,000 an hour.

When Eric was fired the previous morning, as part of a relatively routine herd-culling operation, he handed off a Zip drive to his hotshot deputy, Peter Sullivan (Zachary Quinto), with the injunction, "Be careful." Eric has noticed that the firm's aggressive position in the subprime mortgage market has started to come unglued over the past few weeks, and as Peter crunches the numbers late that night, he grasps the ramifications: The bank will rapidly be swamped in bad debt if it doesn't find a way to unload it all right away. So Emerson is hauled away from his drinking and skirt-chasing, Spacey's Sam Rogers is summoned from the vet -- where he's been watching his dog be put to sleep -- and the firm's brain trust is rapidly assembled for a post-midnight meeting.

There's definitely an actors' showcase quality to "Margin Call," and Chandor seems in various ways more like a playwright than a filmmaker, but throughout the long night the tension rises and the characters crackle. Moore and Aasif Mandvi show up as senior executives who grill Peter on his findings and his credentials, under the watchful eye of Simon Baker as Jared Cohen, the firm's boyish president, resented and feared by all. Quinto nicely underplays his numbers-geek role, a guy who in a dumber, more Hollywood version of this movie (e.g., Oliver Stone's dreadful "Wall Street" sequel) would have been made the hero. Peter explains that he has an advanced degree in propulsion from MIT. "So you're a rocket scientist," Cohen remarks mildly. "Interesting."

After that meeting comes the next one, around 4 o'clock in the morning, at which the whole situation must be laid out before John Tuld, the firm's principal owner, played by a cheerful and cadaverous Jeremy Irons. With almost diabolical glee, Tuld tells Peter (who of course he has never met) to explain things to him as if he were addressing a small child, or a golden retriever. I don't know enough about finance to judge Chandor's suggestion that one firm and perhaps one man could have launched the cascading collapse of '08, but then again that's only partly what he's suggesting. Even a billionaire financier like Tuld, as he explains, is at the mercy of larger forces, and his decision to sell off assets he knows are worthless -- as several major Wall Street firms did -- is simply a matter of Darwinian survival, of playing the game by long-established rules.

Despite Spacey's two Oscars, his screen acting has played second fiddle in recent years to his career on the London stage and as artistic director at the Old Vic. He has so often played hooded or secretive characters, a fact now inextricably connected with his silence about his personal life. Sam Rogers is not an especially enigmatic character, but he is a profoundly wounded one who has given his life to a business and an institution that has relied for years on his unscrupulous conduct and is about to kick him to the curb. The music has stopped, as Irons' character says, and Sam finds himself with no job, no family, no future, no moral high ground and a big pile of money, digging a hole to bury his dead dog. It's one of the great performances found in American movies this year.