The killing of Awlaki's 16-year-old son

Extreme secrecy, as usual, shrouds this act, but it underscores how often the U.S. uses violence around the world 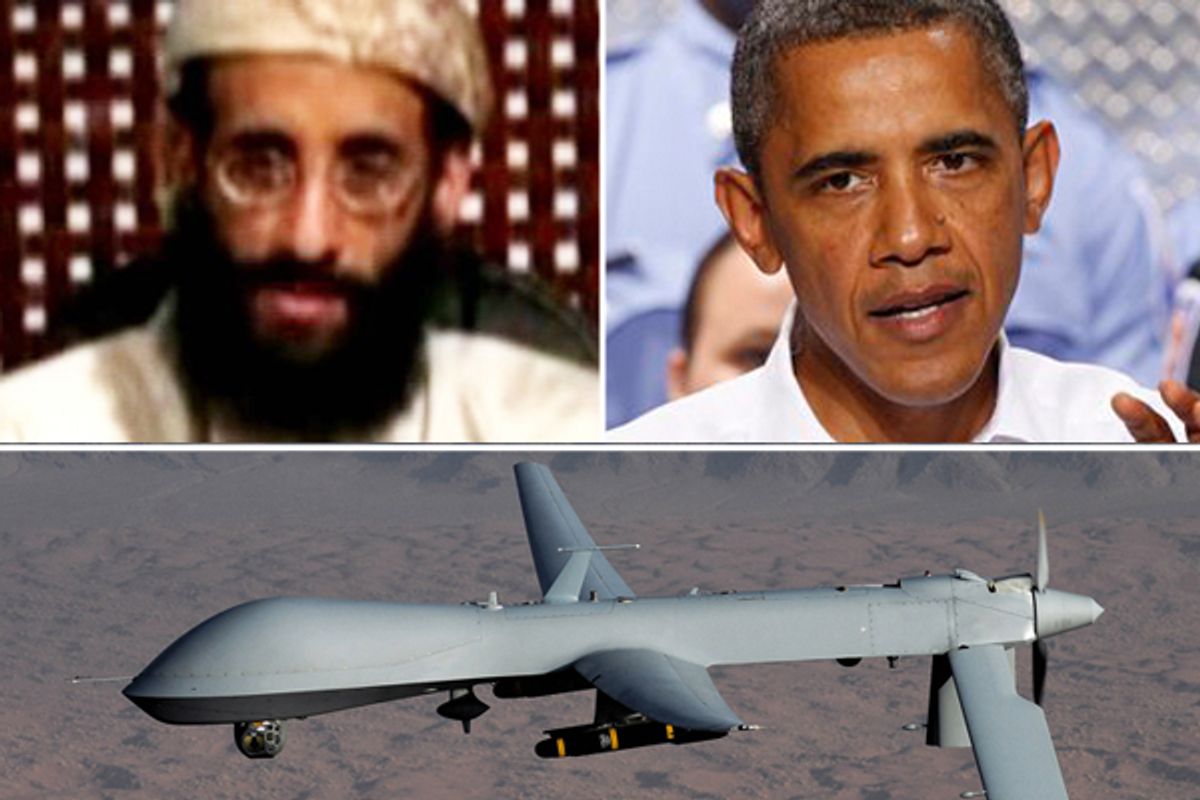 Two weeks after the U.S. killed American citizen Anwar Awlaki with a drone strike in Yemen -- far from any battlefield and with no due process -- it did the same to his 16-year-old son, Abdulrahman al-Awlaki, ending the teenager's life on Friday along with his 17-year-old cousin and seven other people. News reports, based on government sources, originally claimed that Awlaki's son was 21 years old and an Al Qaeda fighter (needless to say, as Terrorist often means: "anyone killed by the U.S."), but a birth certificate published by The Washington Post proved that he was born only 16 years ago in Denver. As The New Yorker's Amy Davidson wrote: "Looking at his birth certificate, one wonders what those assertions say either about the the quality of the government's evidence -- or the honesty of its claims -- and about our own capacity for self-deception." The boy's grandfather said that he and his cousin were at a barbecue and preparing to eat when the U.S. attacked them by air and ended their lives. There are two points worth making about this:

(1) It is unknown whether the U.S. targeted the teenager or whether he was merely "collateral damage." The reason that's unknown is because the Obama administration refuses to tell us. Said the Post: "The officials would not discuss the attack in any detail, including who the target was." So here we have yet again one of the most consequential acts a government can take -- killing one of its own citizens, in this case a teenage boy -- and the government refuses even to talk about what it did, why it did it, what its justification is, what evidence it possesses, or what principles it has embraced in general for such actions. Indeed, it refuses even to admit it did this, since it refuses even to admit that it has a drone program at all and that it is engaged in military action in Yemen. It's just all shrouded in total secrecy.

Of course, the same thing happened with the killing of Awlaki himself. The Executive Branch decided it has the authority to target U.S. citizens for death without due process, but told nobody (until it was leaked) and refuses to identify the principles that guide these decisions. It then concluded in a secret legal memo that Awlaki specifically could be killed, but refuses to disclose what it ruled or in which principles this ruling was grounded. And although the Obama administration repeatedly accused Awlaki of having an "operational role" in Terrorist plots, it has -- as Davidson put it -- "so far kept the evidence for that to itself."

This is all part and parcel of the Obama administration's extreme -- at times unprecedented -- fixation on secrecy. Even with Senators in the President's own party warning that the administration's secret interpretation of its domestic surveillance powers under the Patriot Act is so warped and radical that it would shock the public if they knew, Obama officials simply refuse even to release its legal memos setting forth how it is interpreting those powers. As EFF's Trevor Timm told The Daily Beast today: "The government classified a staggering 77 million documents last year, a 40 percent increase on the year before." And as I wrote about many times, the Obama administration even tried -- and failed -- to force The New York Times' James Risen to reveal his source for his story about an inept, disastrous CIA effort to infiltrate Iran's nuclear program, but as Politico's Josh Gerstein reports today, the Obama DOJ is now appealing the decision in Risen's favor. Gerstein writes:

The executive director of the Reporters Committee for Freedom of the Press, Lucy Dalglish, said the appeal was troubling for First Amendment advocates, but not unexpected.

“I’m not surprised at all,” Dalglish said “The Obama administration has made it absolutely clear they detest leakers and they are going to be very aggressive against leakers.”

“It’s really looking like they want to put Risen in prison,” [the defendant's lawyer Edward] MacMahon said in a brief interview. . . . "For the journalists in the world, it’s quite a significant First Amendment appeal.”

You can offer the ability to citizens to choose from one of the two parties and elect their leaders as much as you want. But "democracy" is an illusion -- a sham -- if the most significant acts taken by those leaders are kept concealed from the citizenry. Dana Priest and William Arkin wrote a multi-part series, and followed it up with a book, describing "Top Secret America": the sprawling, secret government/private-sector apparatus accountable to nobody. Leaks and whistleblowers are the only real avenue remaining for citizens to know what their government does, and it's why the Obama administration is so obsessed with persecuting whistleblowers, crushing WikiLeaks, and now even trying to imprison one of the nation's best investigative journalists.

For many people, this type of secrecy is not bothersome because -- when their party controls the White House -- they trust their leader to be honest and act properly; that's what Bush followers who viewed Bush as a good, earnest Christian constantly said in response to objections over radical secrecy, and it's what many Obama followers say now (if Obama says someone is a Terrorist, I don't need to see evidence: I'm sure he is - if Obama says Iran is behind a Terrorist plot, I don't need to see evidence: I'm sure they are). But that obviously isn't a healthy mindset when forming expectations of political leaders. More so, you can't have a functioning democracy if the government refuses even to discuss its most radical and significant acts. The Obama administration is just off waging a secret war in Yemen, killing its own citizens from the sky, and refusing to account to anyone for what it's doing. If you accept that level of secrecy, what don't you accept?

(2) Every now and then it's worth pausing to reflect on how often we talk about the killing of people by the U.S. Literally, the U.S. government is just continuously killing people in multiple countries around the world. Who else does that? Nobody -- certainly nowhere near on this scale. The U.S. President expressly claims the power to target anyone he wants, anywhere in the world, for death, including his own citizens; he does it in total secrecy and with no oversight; and this power is not just asserted but routinely exercised. The U.S., over and over, eradicates people's lives by the dozens from the sky, with bombs, with checkpoint shootings, with night raids -- in far more places and far more frequently than any other nation or group on the planet. Those are just facts.

What's most striking about this is how little effort is needed to induce America's political and media elites to acquiesce to it. The government need do nothing more than utter empty nationalistic phrases such as "we're at war" and "Terrorist!" and this unparalleled, endless state violence all becomes instantly justified. Yesterday, Yemen expert Gregory Johnsen wrote about the Awlaki killings: "Many Yemenis can understand (if disagree) killing the father, few can understand killing the son," and pointed to this Facebook entry from a young Yemeni as illustration of what he meant; read the text:

I have no doubt that many Americans, probably most, would consider this comparison to be outrageous hyperbole, even offensive and slanderous. I have just as little doubt that many Americans, probably most, would be saying things quite similar to this if it were another country, engaging in far more violence than all others, routinely zapping innocent teeangers, children, women and men out out of existence on American soil using sky robots and cluster bombs (just look at America's ongoing reaction to a single, one-day attack on its soil a full decade ago). But the U.S. does this so often, and has for so long, that most of the citizenry has either concocted or ingested mental and intellectual strategies for pretending this doesn't happen or justifying it when they can't. So we just killed an American teenager and his teenage cousin by drone-bombing them to death? They merely join a very long list of similar recent victims -- a list that, paradoxically, makes less of an impact the longer it becomes.

UPDATE: Those who believe evidence and transparency in such matters are unnecessary because the government under Obama -- unlike under Bush -- would never issue false claims about such things and can be trusted without accountability should review this and this.