About that Iraq withdrawal 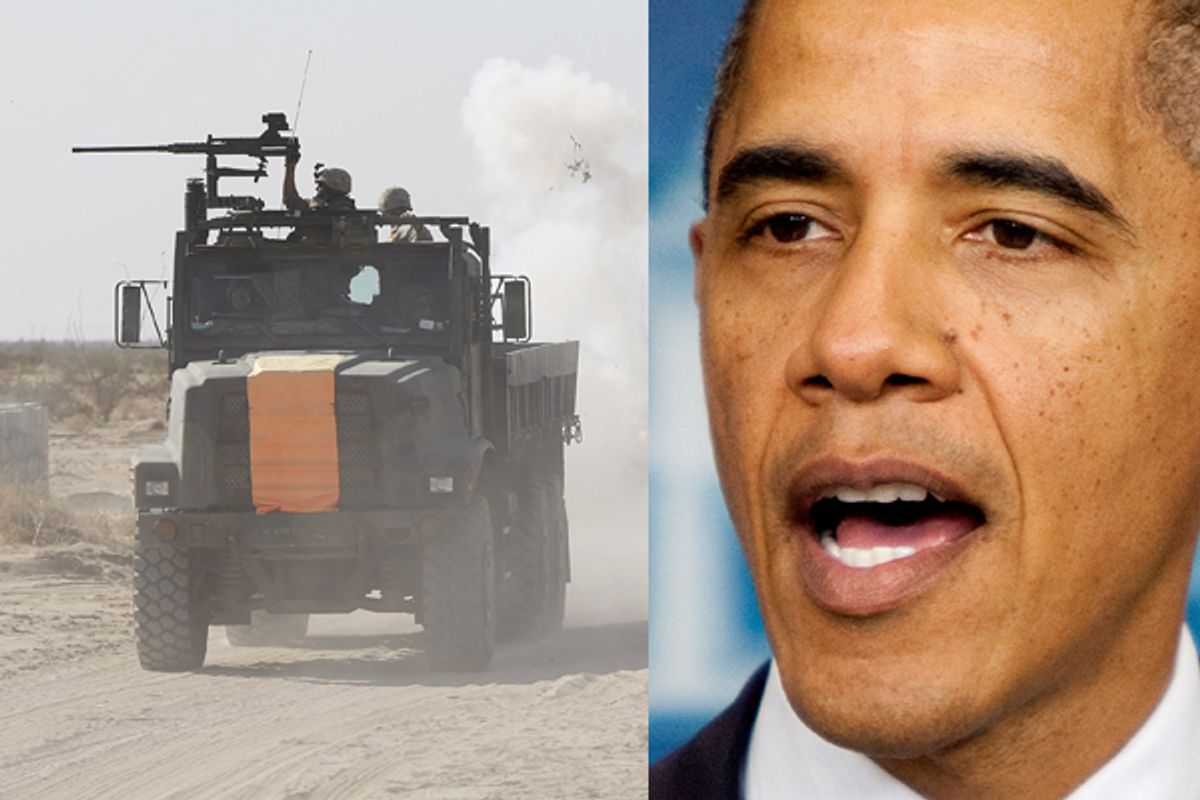 President Obama announced today that all U.S. troops will be withdrawn from Iraq by the end of the year, and this announcement is being seized upon exactly the way you would predict: by the Right to argue that Obama is a weak, appeasing Chamberlain and by Democrats to hail his greatness for keeping his promise and (yet again) Ending the War. It's obviously a good thing that these troops are leaving Iraq, but let's note three clear facts before either of these absurd narratives ossify:

First, the troop withdrawal is required by an agreement which George W. Bush negotiated and entered into with Iraq and which was ratified by the Iraqi Parliament prior to Obama's inauguration. Let's listen to the White House itself today: “'This deal was cut by the Bush administration, the agreement was always that at end of the year we would leave. . . .' an administration official said." As I said, it's a good thing that this agreement is being adhered to, and one can reasonably argue that Obama's campaign advocacy for the war's end influenced the making of that agreement, but the Year End 2011 withdrawal date was agreed to by the Bush administration and codified by them in a binding agreement.

Second, the Obama administration has been working for months to persuade, pressure and cajole Iraq to allow U.S. troops to remain in that country beyond the deadline. The reason they're being withdrawn isn't because Obama insisted on this, but because he tried -- but failed -- to get out of this obligation. Again, listen to the White House itself:

The Status of Forces Agreement between the United States and Iraq expires at the end of the year. Officials had been discussing the possibility of maintaining several thousand U.S. troops to train Iraqi security forces, and the Iraqis wanted troops to stay but would not give them immunity, a key demand of the administration. . . .

“The Iraqis wanted additional troops to stay,” an administration official said. “We said here are the conditions, including immunities. But the Iraqis because of a variety of reasons wanted the troops and didn’t want to give immunity.”

The Obama administration -- as it's telling you itself -- was willing to keep troops in Iraq after the 2011 deadline (indeed, they weren't just willing, but eager). The only reason they aren't  is because the Iraqi Government refused to agree that U.S. soldiers would be immunized if they commit serious crimes, such as gunning down Iraqis without cause . As we know, the U.S. is not and must never be subject to the rule of law when operating on foreign soil (and its government and owners must never be subject to the rule of law in any context). So Obama was willing (even desirous) to keep troops there, but the Iraqis refused to meet his demands (more on that fact from Foreign Policy's Josh Rogin).

Third, there will still be a very substantial presence in that country, including what McClatchy called a "small army" under the control of the State Department. They will remain indefinitely, and that includes a large number of private contractors.

None of this is to say that this is bad news (it isn't: it's good news), nor is it to say that Obama deserves criticism for adhering to the withdrawal plan (he doesn't). It would just be nice if these central facts -- painfully at odds with the two self-serving narratives that started being churned out before the President even spoke -- were acknowledged.

I believe the country has not even gotten close to coming to terms with the magnitude of the national crime that was the attack on Iraq (I think that's why we're so eager to find pride and purpose in the ocean of Bad Guy corpses our military generates: tellingly, the only type of event that generates collective national celebrations these days).  Needless to say, none of the responsible leaders for that attack have been punished; many continue to serve right this very minute in key positions (such as Vice President and Secretary of State); and (other than scapegoated Judy Miller) none of the media stars and think-tank "scholars" who cheered it on and enabled it have suffered an iota of stigma or loss of credibility. The aggressive war waged on Iraq began by virtue of a huge cloud of deceit and propaganda; perhaps it could end without that.

The schedule for my book tour, beginning next week, has been updated and changed; that will likely continue to happen, so those interested should periodically check that schedule, though I'll try to note significant changes here as well.

UPDATE: Over at Wired, Spencer Ackerman documents the ongoing reality in Iraq and writes: "President Obama announced on Friday that all 41,000 U.S. troops currently in Iraq will return home by December 31. 'That is how America’s military efforts in Iraq will end,' he said. Don’t believe him." Digby adds that the administration "clearly didn't want this outcome and lobbied hard to get the Iraqis to push back the deadline" and thus concludes: "after everything our government has done in this region over the past few years, I think these facts argue for skepticism rather than celebration." But as we've seen over and over, nothing is less welcome that these sorts of clouding facts that get in the way of a political celebration.

UPDATE II: Here's the headline and first couple paragraphs on the "Iraq withdrawal" from National Journal:

Watch to see whether these facts are included or ignored in the prevailing narrative about this event.

The State Department is racing against an end-of-year deadline to take over Iraq operations from the U.S. military . . . . Attention in Washington and Baghdad has centered on the number of U.S. troops that could remain in Iraq. But those forces will be dwarfed by an estimated 16,000 civilians under the American ambassador — the size of an Army division.

Think Progress previously described the State Department's efforts to block oversight actions with regard to its new private army.

On a separate note, this commenter voices some accurate objections to my use of the term "scapegoat" for Judy Miller; my reply is here.