Pick of the week: Elizabeth Olsen in "Martha Marcy May Marlene"

Pick of the week: The famous twins' younger sister has her own star turn in the haunting "Martha Marcy May Marlene" 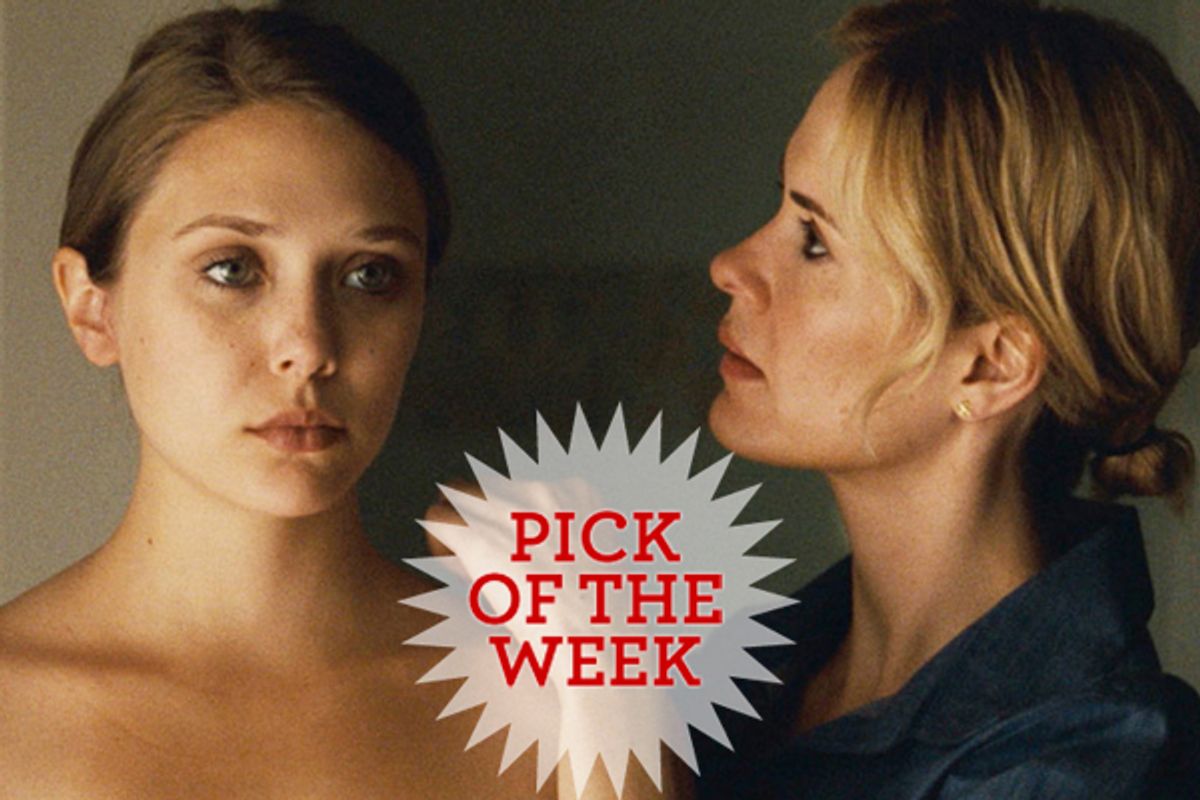 Elizabeth Olsen and Sarah Paulson in "Martha Marcy May Marlene"
--

When first we meet the title character of the indie thriller "Martha Marcy May Marlene" (played by 21-year-old Elizabeth Olsen, who apparently has famous sisters), she is sneaking out of a communal household somewhere in the rural Northeast, and escaping into the woods. We don't exactly know why she's running away, except that it clearly seems to be the kind of place where you don't simply say "so long" and catch a lift to the Trailways station. When Martha, which is actually her given name, makes it to the nearest town, a guy from the house (Brady Corbet) tracks her down and tries to convince her to go back with him. He doesn't threaten her or lay hands on her, but the implication that he holds power over her is obvious. Martha successfully resists, and phones her sister in Connecticut -- but she doesn't even know the name of the town she's calling from, and won't explain why she's been missing for almost two years.

So begins a compelling and addictive yarn about an impressionable young woman with a possible personality disorder who is stuck between two families. There's her biological family, which has apparently been blown apart by death, dysfunction and the pressures of material life, and the terrifying cult household she's just fled, which has fulfilled many of her emotional needs but at a terrible price. I have mixed feelings about "Martha Marcy May Marlene," even leaving aside the complicated question of whether its tongue-twister title is brilliant or disastrous. But this film-festival fave -- it has been screened at Sundance, Cannes, Toronto and New York, a rare grand tour -- is worth seeing for a host of reasons, paramount among them Olsen's star-is-born performance as its vulnerable, enigmatic, maddening heroine. Simultaneously voluptuous and innocent, Martha is the kind of young woman who doesn't even realize the intensely needy signals she's putting out, and who in the best of times has difficulty telling objective reality apart from her inner psychological landscape.

Writer-director Sean Durkin moves back and forth between Martha's two families: As she struggles to connect with her stressed-out yuppie sister Lucy (Sarah Paulson) and uptight, type-A brother-in-law Ted (Hugh Dancy), while crashing at their lakefront McMansion, we gradually learn more about her months in the isolated commune. When Patrick, the wiry, charismatic communal godfather played by the always-terrific John Hawkes ("Winter's Bone"), first lays eyes on Martha, his eyes light up like a kid looking at a Christmas window. She's pretty, intelligent, painfully uncertain and achingly, impossibly young -- an adult woman with a 13-year-old's shy awkwardness. She's a cult leader's dream, and when Patrick tells her, in a much darker scene later in the film, that she's his favorite and he's not letting her go, we believe him -- and she does too.

At first Patrick's household may seem like an overly intense bunch of back-to-the-land neo-hippies grouped around a messianic guru -- except that the men and women eat dinner separately (in total silence), contact with the outside world is discouraged, and Patrick's relationships with all the female members of the group seem to echo the alleged droit du seigneur of medieval lordships. There are echoes of, say, Margaret Atwood's "The Handmaid's Tale," and also of authentic cult psychology, in the disturbing way the group's veteran female members are used to indoctrinate newcomers into a culture of rape and male supremacy. Marcy May, by the way, is the name Patrick assigns to Martha (something he also does with other women) -- and any female member who answers the communal telephone is instructed to identify herself only as "Marlene Lewis." Although the setting of the film is contemporary, Durkin is clearly thinking both of Charles Manson’s “family” and of the Symbionese Liberation Army, kidnappers of Patty Hearst in the 1970s, who did indeed hide out on a farm in the Catskills for a while. (I recognize some of the locations in this film as in and around Monticello, N.Y.)

It becomes abundantly clear why Martha needs to flee from Patrick's increasingly tyrannical and nightmarish household, and "Martha Marcy May Marlene" is an utterly gripping ride that will keep you guessing until the last second about what is real and what imagined, and whether Martha has entirely snapped the tether of sanity. To my taste, though, her relationship with Ted and Lucy is more mechanical and less convincing; they're such insufferable Manhattanite archetypes that they don't emerge as real characters, and the contrast Durkin tries to strike between their version of social programming and Patrick's feels like forced irony. Martha plays the role of the "holy innocent" suddenly thrust into their midst: She doesn't understand why it's not OK to swim naked in their lake or crawl into bed with them while they're having vigorous sex, and she keeps asking why two people need such an enormous house. Meanwhile, with a halfway psychotic girl on their hands who won't talk about where she's been for two years and exhibits clear signs of post-traumatic stress, Lucy and Ted just drink wine and argue, without summoning a shrink, the cops or any kind of social-service support. I'm not saying that's totally implausible, but in this section of "Martha Marcy May Marlene," the plot seems to be driving the characters rather than the other way around.

Durkin seems to be aiming for a Hitchcock-style thriller that has the unsettling psychological and narrative ambiguity of, say, Michael Haneke's films, with an ending you can read in many different ways. If he doesn't quite get there, it's still a remarkable feature-directing debut. "Martha Marcy" is the third feature produced by the intriguing New York-based DIY team Borderline Films, a collaborative company run by Durkin and fellow filmmakers Antonio Campos and Josh Mond (who both serve as producers here). If Campos' extraordinary 2009 debut "Afterschool" got them noticed in cinematic circles, this movie has much greater potential for commercial and awards success. For those guys, as for the immensely talented Olsen sister, the best is still ahead.

"Martha Marcy May Marlene" is now playing in New York and Los Angeles. It opens Oct. 28 in Chicago, Dallas, San Diego, San Francisco and Toronto, with more cities and dates to follow.