Why are we still rubbernecking Lindsay Lohan?

The actress doesn't need a trainweck reality TV show -- her life has become one. Will it all end at an L.A. morgue? 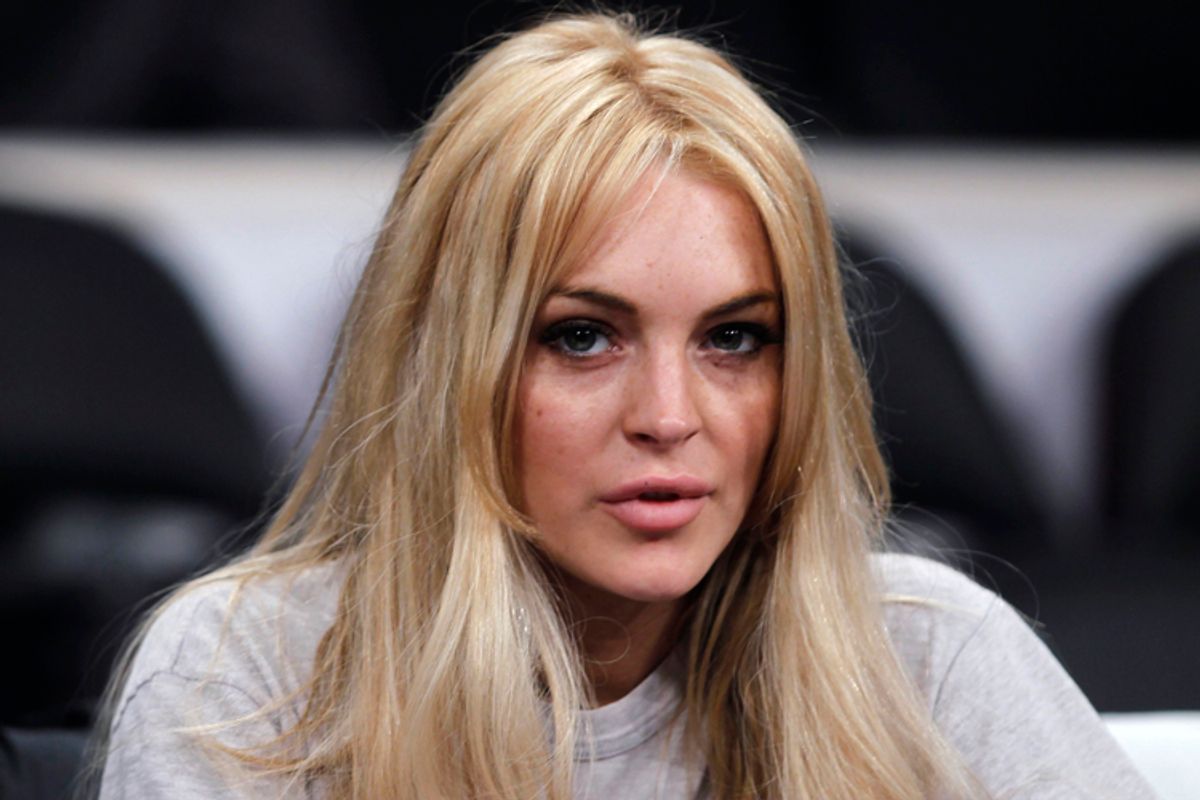 Of all the places you'd expect Lindsay Lohan to be turned away from, you wouldn't expect the county morgue to be one of them. Yet this week, the frequently SCRAM bracelet-accessorized, self-described "artist of many things :)"  bombed out on her community service obligation by showing up 40 minutes tardy. Dear Lindsay, there is no "fashionably late" for court-appointed service.

Lohan's apparently pathological inability to get her act together has made for reliable tabloid fodder for the better part of the last decade. What's amazing – and by amazing, I mean horrible – is that the interest in her exploits refuses to die down. It's been ages since she's been in an even vaguely acclaimed movie (even "Bobby" was five years ago); her music career is nonexistent; she doesn't even have a train-wreck reality show. Unlike the late Amy Winehouse, she doesn't possess a tragic genius, a talent that burns so brightly it makes her struggles with demons frustratingly poignant. It's hard to imagine a television studio full of fans dressed up like Lindsay Lohan because her work was so meaningful. Instead, the sideshow of a once promising, effervescent and undeniably beautiful woman deteriorating in public holds a different kind of allure – the morbid "How bad can it get?" kind.

Lately, things have been bad indeed for Lohan. Last week, she showed up on the red carpet for the release of a new video game – you could stop right there and have a tragedy. But what was truly alarming were her stained, snaggly teeth and dirty, scraped-up hands. A puffy and strangely bronzed Lohan was then handcuffed and briefly jailed for "blowing off" her court-ordered community service she's been ordered to do for her "numerous" parole violations. Judge Stephanie Sautner noted that Lohan had already been kicked out of a program at a women's shelter, after doing only 21 of her 360 assigned hours.

And so, after posting her $100,000 bail, what did Lohan do next? She sauntered in late for her community service the very next day. After missing her start time and orientation, the morgue turned her away, but offered her the opportunity to try again Friday. Her start time was set for 7 a.m., so good luck, Lins! Lohan, for her part, says the screw-up was caused by trying to get through the paparazzi and being confused over where to report. She tweeted, "With all of the stress and pressure from yesterday and today, I've never been so happy to go to therapy!!!! Also, I'm sorry for the confusion that I may of [sic] caused to those at the Coroner's office. Won't happen again, now I know where to go! Thank you for your help."

Now, if I'd been led away in handcuffs the day before, I'd set the alarm and give myself a nice long lead time to get it together to show up promptly for my gig at the dead people's office. But Lohan doesn't live in that kind of world. Somehow, no matter how many times she stands before a judge, her sense of accountability remains firmly untouched.

Yet despite her failures, despite her slew of second chances, it can't be great being Lindsay Lohan right now. Her mom is currently shopping around a tell-all memoir about her famous daughter's "life-style of partying excessively." Her dad, never one to miss an opportunity to mouth off, has declared her appearance to be clearly the result of  "meth or crack." With those two for parents, you can see why a lady might want to hit the snooze button.

Lohan is a grown woman who has made her mistakes, and seems unable, despite numerous stints at rehab and admonishments from the legal system, to distance herself from them. With each new shambling red-carpet appearance, each grim court date, each pathetic tweet of vague remorse, her body of work becomes less about her performances and more just a collection of troubling photographs and sad headlines. She's a pantheon to unfulfilled promise, a Hollywood story of having too much, too soon. She's become the woman toddling on a high wire, a source of little more than, at this point, sick fascination. That's what makes headlines and gets rubbernecking followers on Twitter. The fact that somewhere in there is still a vulnerable, obviously troubled person who seems to have none of the coping tools to make it to her next probation date gets lost in a story that an eager tabloid culture seems to have all but written. It's the story of a former child actress who partied a lot and bounced unsuccessfully in and out of rehab and jail. And one way or another, it ends with her at a Los Angeles morgue.