Can the party-hearty Puerto Rico setting of "The Rum Diary" explain the star's obsession with Hunter Thompson? 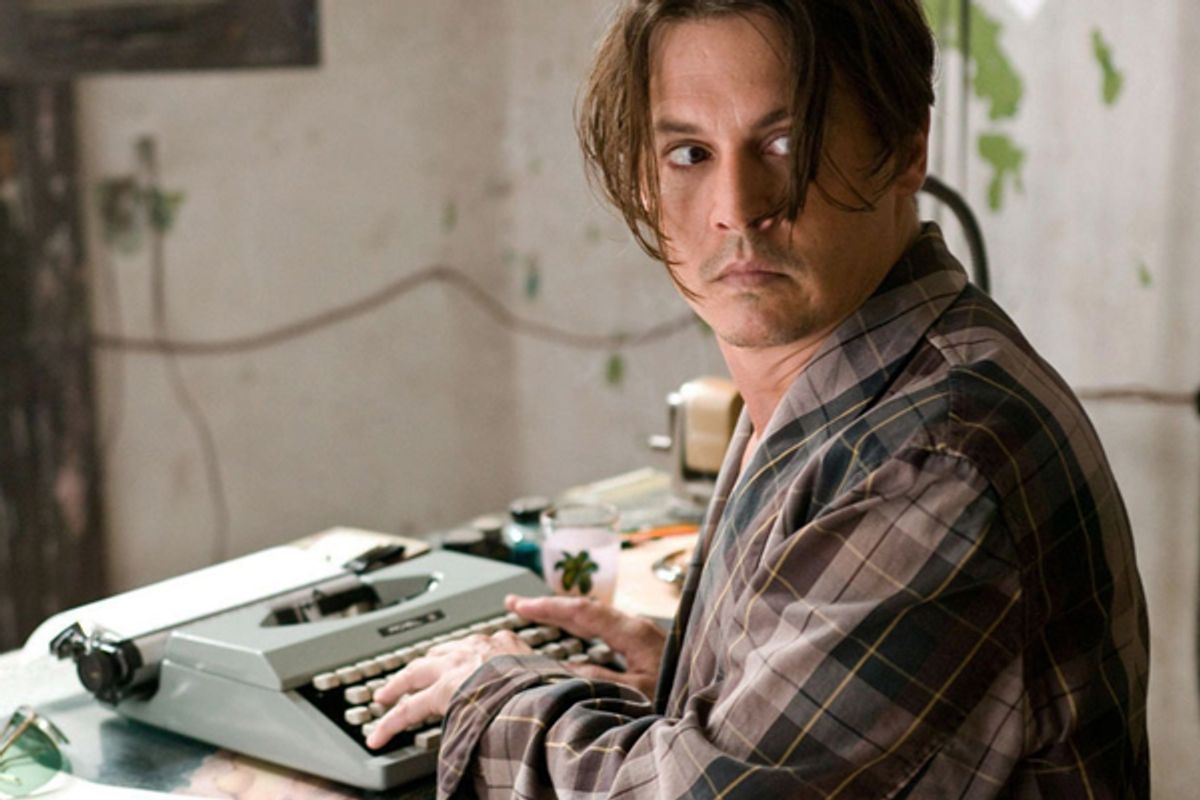 Johnny Depp's quasi-filial bromance with Hunter S. Thompson has now extended well beyond the celebrated gonzo journalist's death, with consequences that are a lot like the relationship itself: Strange, endearing and a little bit embarrassing. Depp personally financed and supervised the firing of Thompson's earthly remains out of a cannon at the writer's 2005 funeral, an event captured in Alex Gibney's documentary "Gonzo: The Life and Work of Dr. Hunter S. Thompson" (narrated, of course, by Johnny Depp). Having played Thompson's most famous alter ego, Raoul Duke, in Terry Gilliam's psychotronic 1998 version of "Fear and Loathing in Las Vegas" -- a flawed film, but very much worth a second look in its recent Criterion release -- Depp now returns to the Thompson well of booze and acid for a second dip.

It's impossible not to admire the mild, sweet-tempered eccentricity of "The Rum Diary," in which Depp plays a naive young American journalist named Paul Kemp, a romantic boozehound who yearns to make a name as a writer and speak truth to power. Instead, he finds himself exiled to the corrupt backwater of Puerto Rico in 1960. Although made more than a decade after Gilliam's "Fear and Loathing," this movie is a trip backward into Thompson pre-history, based on an autobiographical novel Thompson wrote in his 20s that sat unpublished until after his death. As Depp explained in a recent as-told-to interview with Newsweek, "The Rum Diary" is almost a rough draft of "Fear and Loathing," and Kemp is an early version of Raoul Duke: "He was a kid searching for his voice and looking for the outlet for that rage, anger, and passion. In terms of how I approached 'The Rum Diary' as an actor, Raoul Duke is the fully realized Hunter Thompson, and this character, Paul Kemp, is the Hunter teetering on locating that voice, pre-Gonzo."

While "The Rum Diary" was written and directed by peripatetic English actor and filmmaker Bruce Robinson -- himself a figure of near-Thompsonian dimensions who has directed four movies in 24 years -- Depp's presence as star, producer and carrier of the Gonzo flame is unquestionably the reason why it exists. In discussing Depp's second on-screen go-round as Thompson (or a thinly veiled version thereof), I am tempted to call upon Karl Marx's overused quip about historical events and personages: They always appear twice, the first time as tragedy and the second time as farce. As Depp reels drunkenly through a two-bit, Caribbean version of "Chinatown," aided by enjoyable supporting turns from Michael Rispoli, Aaron Eckhart and Richard Jenkins, "The Rum Diary" is enjoyable enough, after its digressive, episodic and voyeuristic fashion. But neither Depp nor Robinson seems quite aware that Thompson's story -- both in terms of his brief career in Puerto Rico and in terms of his life -- was at least as much a story of tragedy and self-immolation as it was of genius.

Americans are of course endlessly in love with the myth of the self-sufficient individual, the cowboy, the rebel whose allegiance is to no party and no leader. It's better to burn out than it is to rust, and Hunter S. Thompson, left-libertarian gun nut, narcotics aficionado and genuine American original that he was, burned himself out so thoroughly with drugs and alcohol that by the time he reached his 40s he was virtually incapable of writing clean or coherent prose. He had written one absolutely terrific book (which should really be called fiction rather than journalism) and a lot of pranksterish, adventurous magazine articles that stretched the boundaries of what was permissible or conceivable conduct for a reporter, and often obliterated them.

So on one hand, seeing Depp wearing stunning sunglasses, driving a red-and-white Corvette and doing his stop-and-start, deep-focus impersonation of the young Thompson is irresistible fun, and "The Rum Diary" is largely a pointless entertainment, featuring Amber Heard as the blond and spectacular love interest, Eckhart as a diabolical bag  man for developers, Jenkins as a grouchy and soulless editor and Rispoli in the sweaty sidekick role later played by Dr. Gonzo, Raoul Duke's infamous "Samoan attorney." In a general way, Robinson is aware that the movie has to be about the contradictions of Puerto Rico, a United States territory that is largely Spanish-speaking and afflicted with third-world class divisions, although he doesn't make much of it beyond some cool locations and a generalized sense of menace.

If Robinson's name rings a dim and distant bell for you, it's probably because you've seen his hilarious (and reputedly autobiographical) 1987 cult film "Withnail and I," a gonzo-influenced excursion into decrepit and downscale British bohemia. Since that time I have literally no idea how the guy has kept food on his table, although I can recommend his horrifying satire "How to Get Ahead in Advertising" to those with perverse appetites. But even that movie came and went more than 20 years ago, and "The Rum Diary" feels much more like work for hire than like an expression of Robinson's bizarre black humor. He does achieve one of the best and most sinister acid-trip sequences in recent cinema, largely by avoiding the usual smeared cinematography and special effects and playing Depp's encounter with a lobster as hushed and serious.

It's also unintentionally heartbreaking to see Depp play the young Paul Kemp, because even if the actor can't quite see the contradictions of his role (and the movie delivers an impossibly soft and soapy conclusion), I believe Thompson couldn't possibly have missed them. When Kemp first arrives on the island, Jenkins' character laments the fact that his reporters at the San Juan Star suffer from "a lack of commitment and too much self-indulgence." Later in the film, Kemp fends off the booze long enough to sit at his typewriter and bang out a passionate warning to those in power that he is not on their side, and that he will strive to serve as the voice of the disempowered reader. Can he keep that promise tomorrow and the day after that, he asks rhetorically? He doesn't know.

Many of us -- perhaps most of us -- begin lives with promises like that and then have to abandon them or compromise. It isn't fair to indict Thompson for that. Few of us, however, begin life with his abundant talent and clarity of vision, and then expend it on such murky, self-indulgent and fundamentally anti-social work. If you want to argue that Thompson was well suited to the Zeitgeist of his American age, and that his peculiar career captured the decay of our democratic society in distinctive fashion, I'm right there with you. But I suspect Johnny Depp just sees an adorable weirdo who refused to play by the rules, man, and in his innermost heart Hunter Thompson would have been a little disappointed with that.

"The Rum Diary" opens this week in theaters nationwide.