In the Orwellian world of \"In Time,\" working for the man is the only way to say alive -- and young 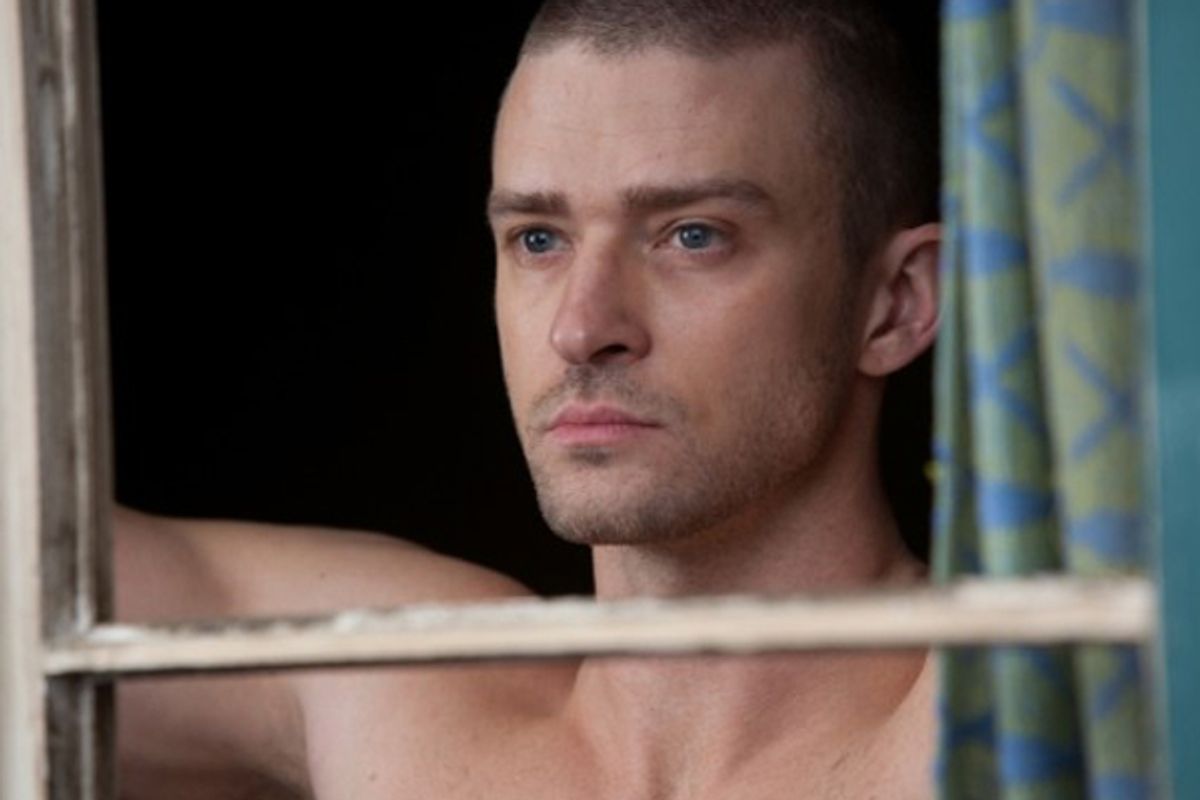 Justin Timberlake in "In Time"
--

On my way out of the New York preview screening of "In Time," I overheard another moviegoer cheerfully describing what he had just seen as a "Marxist propaganda film." So it wasn't just me. But it says something about our times, I guess, that the phrase would even come up in reference to a motion picture that could just as well be called grade-B dystopian sci-fi, or an attempt to position Justin Timberlake as an action star. New Zealand-born writer-director Andrew Niccol, he of "Gattaca" and "S1m0ne," has been making chilly, satirical, almost-excellent science-fiction movies and thrillers for years; he cannot possibly have known that this particular one -- which advocates nothing short of full-on class warfare -- would land right on top of the Occupy Wall Street moment. I mean, could he?

In the greater scheme of movie history, "In Time" isn't going to end up as an especially memorable entry. It's a cool-looking, medium-budget futuristic nightmare in the post-Orwell, post-"Blade Runner," post-"Matrix" vein, neither the best nor worst example you've ever seen. (The cinematography is by the masterful Roger Deakins, which is a major plus.) It suggests a lot of movies that are probably better, like "Se7en" and "Children of Men" and "Minority Report," and a whole bunch that are undoubtedly worse. (Let me throw in yet another plug here for Guy Ritchie's underappreciated and thoroughly insane "Revolver.") Niccol was almost certainly thinking more about the '70s and '80s dystopian tradition of "Logan's Run," "Soylent Green" and "The Running Man" than about contemporary politics.

Still, the guy gets props for being weirdly and accidentally on time with "In Time," and also for the best-ever high-concept premise that allows him to cast only beautiful young actors. See, in the downscale urban future (which strongly resembles the downscale urban past, circa 1978), everyone is genetically engineered to stop aging at 25 -- and to die at 26. On your 25th birthday, a phosphorescent digital clock in your arm starts counting down that last year, and that time is literally money, the society's only currency. If you can accumulate more of it, through work or crime or gambling or the good fortune of birth, you can live on indefinitely -- albeit in constant fear of dying through violence or by accident. But the poor, in the downtrodden "time zone" where Timberlake's character, Will Salas, grew up, must literally live day to day, borrowing or stealing or working double shifts to keep themselves from "timing out." (There are several background details that made me crack up, like a painted advertisement for the "99-second store.")

So my anonymous friend in the theater was absolutely right, since it was Karl Marx who observed that the worker's only capital in the modern economy is his labor power, or vital force, and the capitalist seeks to drain it out of him, day by day, at the cheapest possible rate, allowing the worker the sustenance to continue but little more. Under late capitalism, i.e., large-scale consumer capitalism, to be sure, that equation was altered significantly, at least in the developed world. The question we now face is whether that system is collapsing. "In Time," one could say, forecasts a world in which it has done so -- a world in which a tiny minority have found immortality but lost their souls, while the mass of working people has been reduced once again to an economic subjugation that is based on a supposedly free and fair exchange of labor for capital but is every bit as thorough as slavery or feudalism. But before I assign you a research paper on the "Economic & Philosophic Manuscripts of 1844," let's get back to Justin Timberlake and his fellow hotties.

Niccol hasn't just made a Marxist B-movie (see also: John Carpenter's "They Live"), he's made one in which 27-year-old Olivia Wilde plays the mother of 30-year-old Timberlake. Not his girlfriend or his sister or his gun-slingin' rival, but his smokin' mom. See, she's 50 years old but permanently frozen at 25, and Timberlake's character is 28 and permanently frozen at 25, and slithery, unctuous kazillionaire Philippe Weis (Vincent Kartheiser, aka Pete Campbell from "Mad Men") is, like, 135 but permanently -- you get the idea. After Will accumulates hundreds of years in illicit currency and breaks out of his proletarian zone into the ultra-rich province of New Greenwich, he visits Philippe's luxurious mansion and is introduced to his wife, his mother-in-law and his daughter, each of them equally nubile.

I generally think that Timberlake is an agreeable screen presence, self-effacing and funny, but just as he didn't quite establish himself as a sexy leading man in "Friends With Benefits," I'm not sure he quite looks like the next action hero here. I mean, he's fine, but his Bonnie-and-Clyde romance with Amanda Seyfried (as rich girl Sylvia Weis, Philippe's daughter) is arguably the least interesting element of a movie that starts out terrific and gets more perfunctory and routine as it goes along. I think Timberlake's at his best as a supporting player, as in "The Social Network" (and really, has he ever outdone his lip-sync musical number in "Southland Tales"?). Irish oddball actor Cillian Murphy nearly steals the show as a moody, conflicted Timekeeper, one of the currency cops who maintains order -- so much so that I wish the movie were about him. Kartheiser also glitters in the villain's role, hinting at a depth and complexity of character that Niccol's script really doesn't afford him.

So, yeah -- even if "In Time" descends from its gripping and thought-provoking premise into a mediocre chase thriller before it's over, it's still pretty damn satisfying to watch in the current climate. Of course the contradictions of capitalism are just as present in eras of widespread affluence as in eras of recession or stagnation, but we see them a hell of a lot more clearly at the moment. Niccol is dramatizing the human costs of the concentration of wealth, expressed by Philippe in the film with the formula that some must die so others can live forever. Somewhere Marx quips that capital is immortal even if its possessors are not; this movie's imaginative leap is to conflate the two and build a world where even death, the great leveler in human affairs, can be bought off.