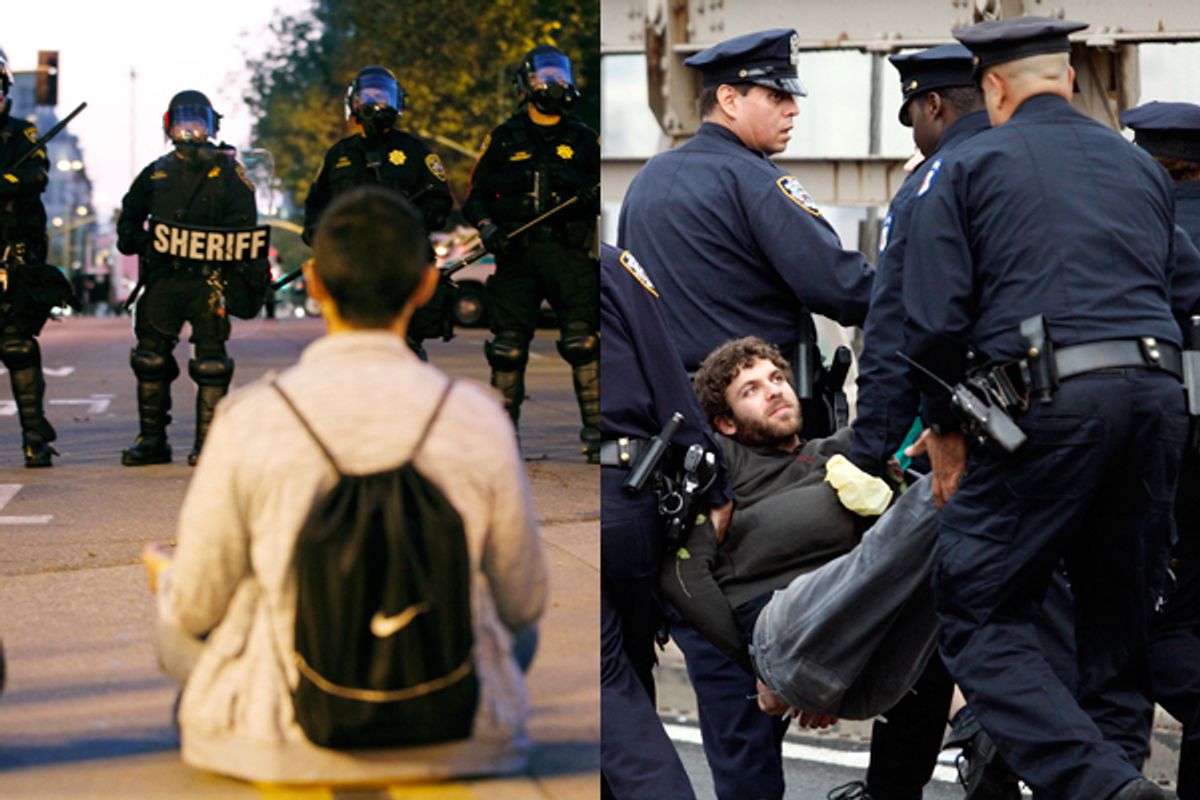 A man sits in front of a police line at City Hall during an anti-Wall Street protest in Oakland. Right: A protester is arrested in New York (Reuters)
--

It was inevitable that Rush and Co. would fall back on the "rioters" line. But Occupy Wall Street now has a potentially serious problem: violent agitators within the movement who could help legitimize the right's narrative.

Mother Jones reporter James West was in Oakland Tuesday night and Wednesday morning, and he found a nonviolent majority that was in effect outvoted by a small group of agitators. This was not a decision made by consensus:

Many demonstrators peace-saluted police and called through bullhorns: "This is a peaceful protest! This is a civilian movement!" But from the moment I arrived in Oakland at 10:15 p.m., I saw a visible minority spoiling for conflict. Tinder had built across the night at the intersection of 14th Street and Broadway, a mixture of expectation and adrenaline. Protesters had balked at what they saw as disproportionate policing: They'd been teargassed once already. But how to respond was a matter of intense debate in the crowd of about 1,000. …

No one appeared in control and the group was divided into two groups: the largely peaceful, and a small, visible, determined group of agitators.

At the height of this melee, I saw two men throw bottles at the police. People screamed and scrambled for air ahead of the inevitable: a half-dozen canisters of tear gas—some crackling and echoing off the Rite Aid building.

The whole Mother Jones piece is worth a read.

The exact chronology of what happened in Oakland is still not clear. And the throwing of bottles and paint and eggs as well as, allegedly, glass and vinegar, does not justify the Oakland Police Department's willy-nilly use of tear gas, rubber bullets and flash bang grenades, all in the name of "public health and safety."

Scott Olsen, the Iraq war vet who suffered a fractured skull after apparently being hit by a police projectile in Oakland, was at the protest with another member of Veterans for Peace, Josh Shepherd. Shepherd has said he went out to the melee in order to "help still the anger" and "to be between the police and the protesters."

Occupy has been almost without exception a nonviolent movement. The vast majority of participants I've encountered in New York are committed to the principle of nonviolence. I've previously written about adventurist elements in Zuccotti Park, but on all the marches I've been on in New York, I have never seen anything close to an assault on a police officer. Nor has there been video of such an assault, to my knowledge.

The head of the NYPD sergeants union told the New York Post today that "over 20" officers have been injured in "OWS-related incidents." But neither the union, which is called the Sergeants Benevolent Association, nor the NYPD itself have responded to my requests for details about the alleged injuries. Until they do, that number should be taken with a healthy dose of skepticism.

It bears repeating: The balance of the reported violence in the Occupy movement has been by the police. Salon's coverage of occupations in Boston, Washington and the Rust Belt has found no instance of protesters initiating violence. But it will only take a handful of violent agitators to give right-wing commentators like Limbaugh -- as well as the mainstream media -- the fodder they need to dismiss protesters as "rioters." This is, in fact, exactly what happened in Seattle in 1999.

If that happens again, it will be a blow to the messages of economic justice and anti-corruption that are at the heart of the Occupy movement.