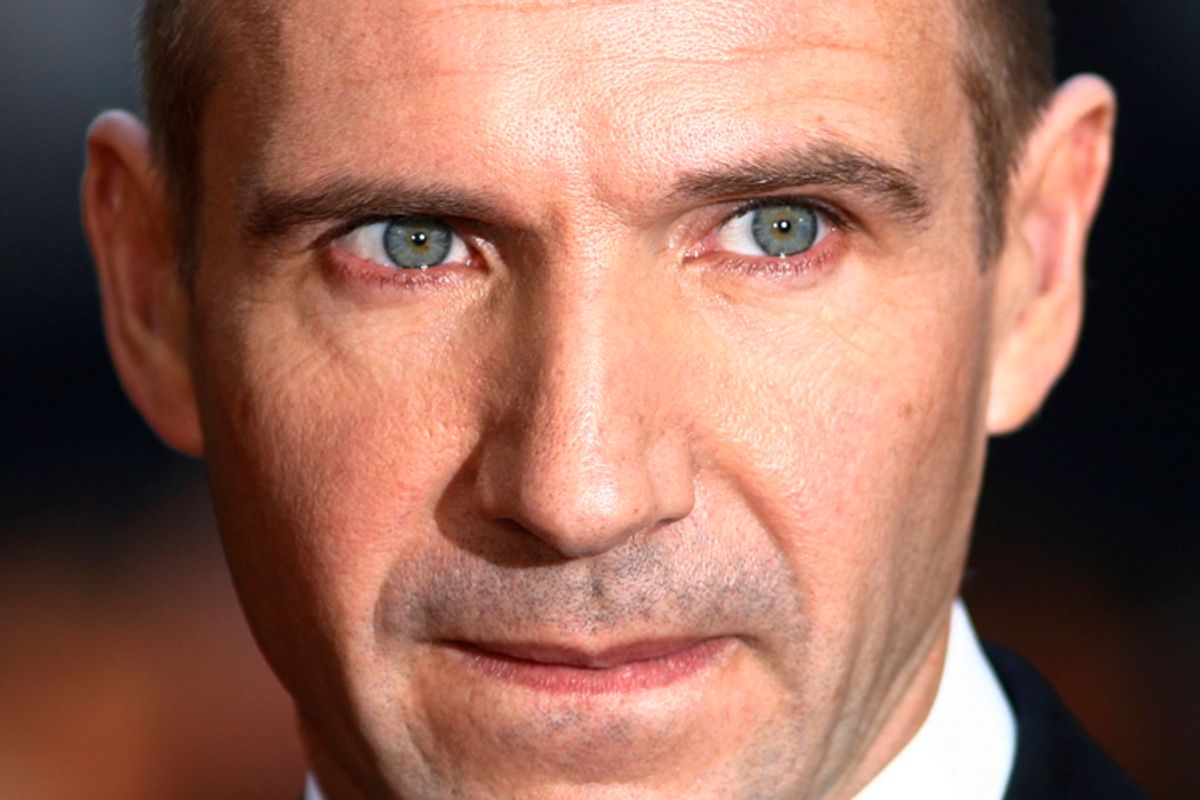 Lord Voldemort is not happy. Accepting the British Film Institute Fellowship at the BFI London Film Festival awards this week, Ralph Fiennes -- the man whose savage portrayals of Nazis, evil wizards and foulmouthed gangsters haunt your nightmares -- railed against his own bete noire: "a world of truncated sentences, sound bites and Twitter." Like!

Fiennes, who's currently playing Prospero in the Theatre Royal Haymarket's version of "The Tempest," added, "I think we're living in a time when our ears are attuned to a flattened and truncated sense of our English language, so this always begs the question, is Shakespeare relevant?… I hear it too from people at drama schools, who say (young people) find the density of a Shakespeare text a challenge in a way that, perhaps, [students] a few generations ago maybe wouldn't have."

Is that guy from "The English Patient" on to something? At 48, Fiennes isn't exactly the social networking generation. The Oscar-nominated actor has no need to friend anybody, or start a funny Tumblr blog -- though it's worth noting that his fellow oldsters Neil Gaiman, Steve Martin and Roger Ebert all display a natural affinity for the medium and manage to function as clear-headed writers.

Fiennes' frustrations capture a stigma the Internet, even now, can't fully shake – the deeply ingrained idea that if it's not a lot of words on a piece of paper, it's meaningless. It's a bastard-stepchild bias that ignores the fact that a tweet is not attempting to be a think piece for the New Yorker. Or that the world is full of people who can articulate an idea in 140 characters and still read and enjoy a Jeffrey Eugenides novel.

Language, Fiennes suggests, "is being eroded -- it's changing. Our expressiveness and our ease with some words is being diluted so that the sentence with more than one clause is a problem for us, and the word of more than two syllables is a problem for us." Fiennes is correct that language is changing. That's why "flash mob" had to be added to the dictionary. But I question whether that lovely "expressiveness and ease" of which he speaks are qualities that were ever truly in great surplus. We're much more aware of how adults communicate and comprehend the written word now, because more people are relying on it. What once would have been a brief conversational exchange or clumsy phone message is now more likely to be a badly constructed text, or a pathetic Facebook status update.

I admit I die a little inside every time someone not named Bono or Prince employs the letters U and 2 in a non-alphabetic, non-numeric context. And I cringe at the way so many of us have learned to substitute multitasking for the sustained pleasure of reading and focusing on one thing. But the students who've grown up flexing their overdeveloped tweet thumbs trouble me far less than the so-called professionals who lazily rely on the tools of social media in their own milieu. I don't watch CNN to find out what somebody in Iowa is tweeting about the news it's CNN's freaking job to cover. And I pretty much threw in the towel on writing for – and reading -- the women's magazine after watching them all go a charticle too far. As a friend refers to them now – "nothing but captions."

But kids these days? They get it. All of it. Earlier this year, my 11-year-old participated in a citywide student Shakespeare Festival. Believe me, kids still grok the hell out of Shakespeare. I've seen hundreds in action. Students are natural-born communicators. They adore wordplay and puns and all the joys of language -- why wouldn't they love its master? So if they can meaningfully toss off a pithy "To thine own self be true," it's because they understand that not even the Bard always needed a full soliloquy to get the point across. And because, as Fiennes put it, they still "love this language we have -- and what it can do." The challenge, for both kids and adults, is to not lose that love along the way -- and to maintain the distinction between emoticons and emotion.