Just like Dukakis, Romney is taking the fun out of New Hampshire

This is shaping up to be the least suspenseful, least consequential New Hampshire primary since 1988 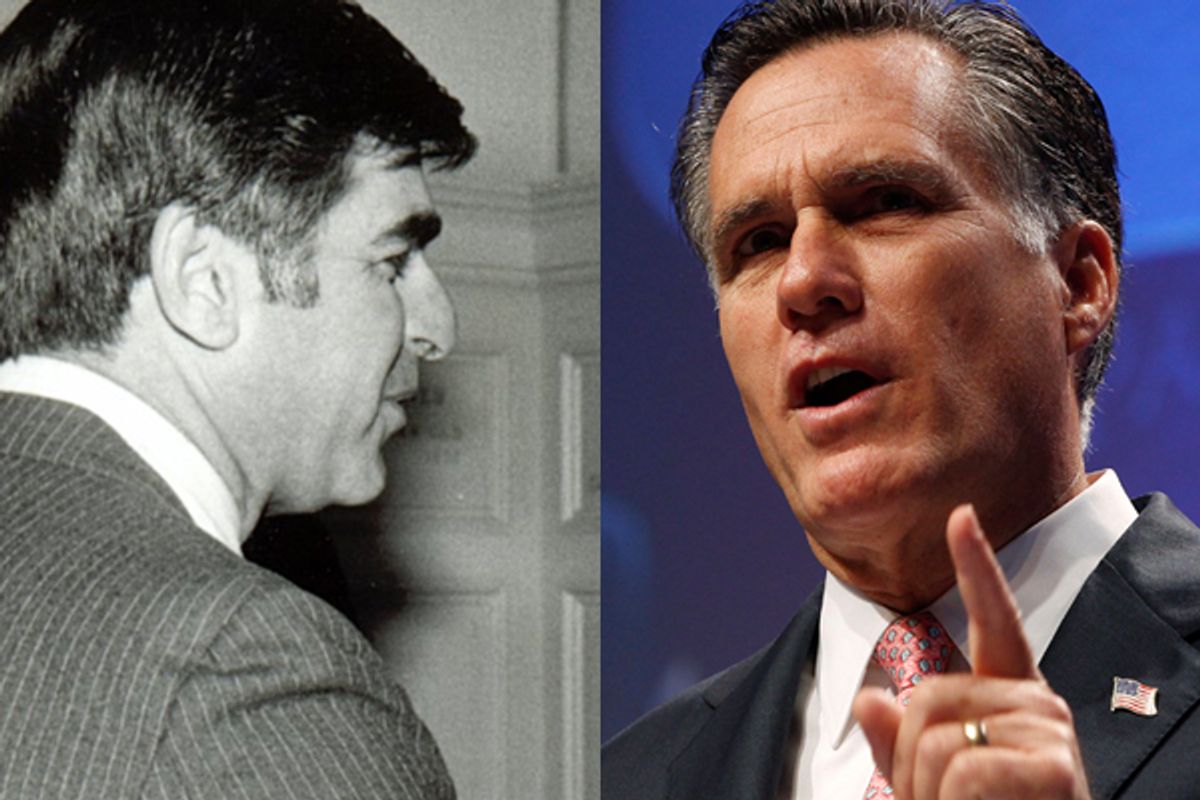 George Will has lately taken to branding Mitt Romney the Republican equivalent of Michael Dukakis -- "a technocratic Massachusetts governor who takes his bearings from 'data' ... and who believes elections should be about (in Dukakis' words) 'competence,' not 'ideology.'" Surely, Romney would reject the comparison, but there is at least one indisputable way in which the two former Bay State leaders are similar: They both took the fun out of New Hampshire.

The current GOP race in New Hampshire is shaping up to be the least suspenseful, least consequential presidential primary in the state since 1988, when Dukakis sought and won the Democratic nomination. The most recent poll in the state gives Romney, who remains well-known from his Massachusetts days and from his 2008 campaign and who owns a home on Lake Winnipesaukee, leading with 40 percent -- almost double the support he typically receives in national polls. In a very distant second place is Herman Cain with 13 percent, followed by Ron Paul at 12 percent. It has been like this all year.

Familiarity partly explains Romney's wide support, but the more libertarian nature of New Hampshire conservatism also plays a role. Religious conservatives make up a far smaller share of the state's GOP electorate (23) than in any other early GOP primary/caucus test, including Iowa (60 percent), South Carolina (60 percent) and Florida (39 percent). This is why overtly religious conservatives like Mike Huckabee and Pat Robertson have struggled in previous New Hampshire primaries, and it's probably one of the (many) reasons that Rick Perry, Michele Bachmann and Rick Santorum haven't found any sustainable traction in the state.

In fact, according to the (Manchester) Union-Leader, there's now concern among New Hampshire Republicans that Perry will decline to contest the state vigorously. Cain has essentially no presence in the state (although that's true everywhere else, too), and there's good reason to suspect his recent polling surge will fade. Paul could fare decently in New Hampshire, given its libertarian streak (and the Free State Project thing), but there seems to be a clear ceiling on his support. Jon Huntsman is betting everything on the state, but generating little discernible interest. The biggest news today, the filing deadline for the primary, is that Gary Johnson, the no-shot former New Mexico governor, forgot to file his paperwork and had to make a desperate, last-second cross-country flight to appear in person at the State House and get his name on the ballot.

In other words, Romney seems poised to post a sizable win almost by default -- something that could give his rivals an incentive to cede it in advance in an effort to deny Romney a post-primary bump. The locals, not wanting to lose their quadrennial spotlight, are doing their best to create suspense. One prominent New Hampshire Republican told the Washington Post that "no candidate in New Hampshire is untouchable in a state that has rarely, if ever, rewarded the frontrunner candidate with a victory."

There's some truth to this, and it is conceivable that the New Hampshire race will tighten if Romney is seen as suffering an embarrassing setback in Iowa, which will hold its causes a week before the Granite State votes. But Romney, at least so far, has been managing expectations well in Iowa -- as Dukakis did in 1988, when he celebrated his third-place finish in the Hawkeye State by declaring, "We won the bronze!" and donning a medal.

Like Romney, Dukakis enjoyed massive leads in pre-New Hampshire polling. A survey in November 1987 gave him 52 percent in the state -- at a time when he wasn't even cracking 20 percent in national surveys. (Dukakis was particularly well-liked by New Hampshire Democrats because their state was dominated by Republicans back then, making their next-door-neighbor governor -- whom many were familiar with thanks to all of the Boston television stations that reach southern New Hampshire -- the closest thing they had to a favorite son.) Thus, there was never much suspense about the '88 primary result, especially when Dukakis emerged from Iowa with his bronze medal. He ended up winning the primary with nearly 40 percent, almost doubling up the second place finisher, Dick Gephardt (who had won Iowa over Paul Simon).

Granted, the presence of a Massachusetts candidate doesn't automatically make New Hampshire a non-event. Paul Tsongas was the underdog in the state for most of the 1992 Democratic campaign, only pulling ahead of Bill Clinton after a series of scandals. Even then, Clinton still managed to "win" the state, convinced that his 8-point loss actually made him the "comeback kid." Similarly, Ted Kennedy's next-door-neighbor status didn't keep Jimmy Carter from beating him by 10 points in the 1980 Democratic primary. And, of course, Romney himself wasn't able to win the state in '08, falling 5 points short against John McCain.

But McCain had strong appeal to the state's GOP electorate. He'd racked up nearly 50 percent in the 2000 New Hampshire primary and remained something of a celebrity in the state even as his national campaign struggled in the summer and fall of 2007. The competition is much less imposing for Romney this time. As with Dukakis, the question isn't whether he can win New Hampshire -- it's whether he can win everywhere else.