Secretary Clinton explains that the U.S. must increase its presence in the region to prevent "outside interference" 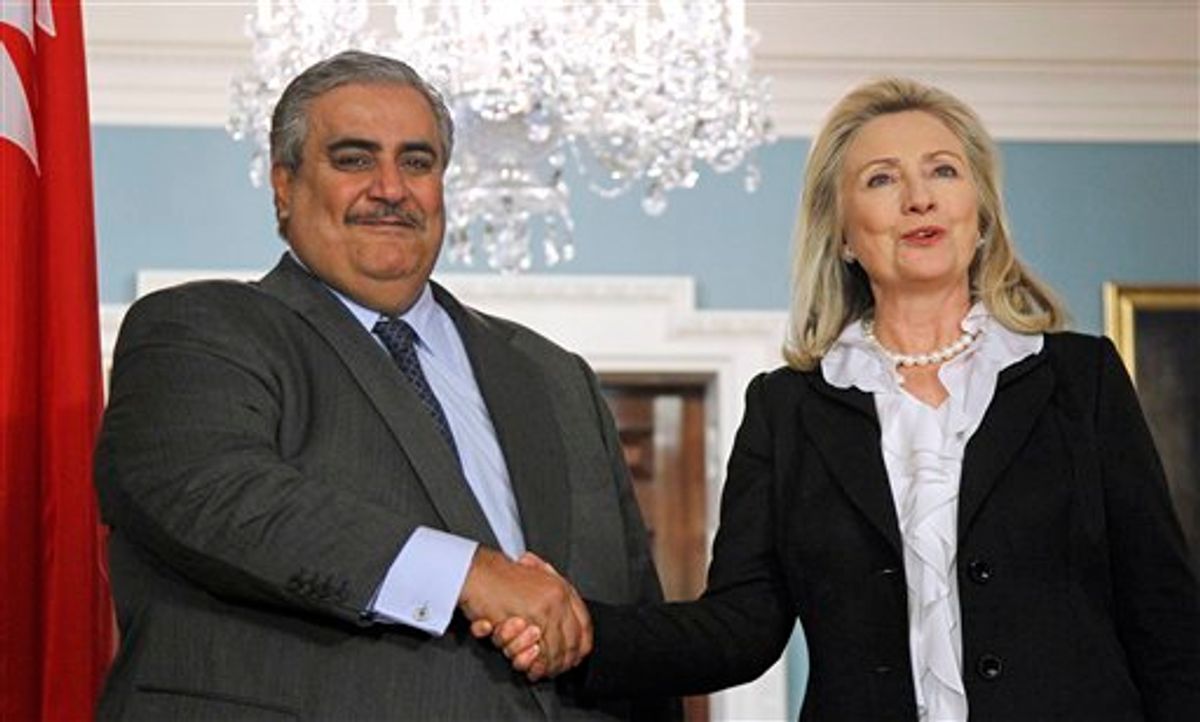 When it comes to American propaganda about the Middle East, this New York Times article -- detailing U.S. plans to bolster its influence in the region after it "withdraws" from Iraq -- is a masterpiece. Here's the crux of the new American strategy and its ostensible rationale:

With an eye on the threat of a belligerent Iran, the administration is also seeking to expand military ties with the six nations in the Gulf Cooperation Council — Saudi Arabia, Kuwait, Bahrain, Qatar, the United Arab Emirates and Oman. While the United States has close bilateral military relationships with each, the administration and the military are trying to foster a new “security architecture” for the Persian Gulf that would integrate air and naval patrols and missile defense.

The U.S. has Iran completely encircled. It has over 100,000 troops in the nation on Iran's eastern border (Afghanistan, where, just incidentally, the U.S. continued through this year to turn over detainees to a prison notorious for torture) and has occupied the nation on Iran's western border (Iraq) for eight years, and will continue to maintain a "small army" of private contractors and CIA officials after it "withdraws." The U.S. continuously flies drone aircraft over and drops bombs on the nation on Iran's southeastern border (Pakistan). Its NATO ally (Turkey) is situated on Iran's northwestern border. The U.S. has troops stationed in multiple countries just a few hundred miles across the Persian Gulf from Iran, virtually all of which are client states. The U.S. has its Fifth Fleet stationed in a country less than 500 miles from Iran (Bahrain) containing "US warships and contingents of U.S. Marines." And the U.S. routinely arms Iran's two most virulent rivals (Israel and Saudi Arabia) with sophisticated weaponry.

But, New York Times readers were told today, the U.S. must increase its military presence still further in that region because . . . it is Iran (which has no military bases in countries bordering the U.S. or fleets stationed off its coast) that is "belligerent" and poses a "threat" (after all, they just dispatched a failed Texan used car salesman who constantly loses his own keys and can't pay his bills to hire teams of Mexican drug cartel gunmen to attack a Saudi ambassador on American soil!).

But the best proclamation in this article comes from the Secretary of State in explaining why this increased American presence is so very needed and so very noble:

“We will have a robust continuing presence throughout the region, which is proof of our ongoing commitment to Iraq and to the future of that region, which holds such promise and should be freed from outside interference to continue on a pathway to democracy,” Secretary of State Hillary Rodham Clinton said in Tajikistan after the president’s announcement.

The U.S. will remain in that region to protect and defend the region's "pathway to democracy" -- something it will achieve by further strengthening its "cooperative military relationships" with the tyrannical regimes in Bahrain, Saudi Arabia, Kuwait and Oman (White House, October 12: "the President and the King reaffirmed the strong partnership between the United States and Saudi Arabia"). But, explained Secretary Clinton, the ultimate U.S. goal in increasing its military presence in the region is to prevent "outside interference" in the region -- just as U.S. officials spent the last decade decrying "outside interference" in Iraq and Afghanistan while simultaneously invading and occupying those nations. The only conceivable assumption which can produce this sort of pronouncement is that this region is the property of the U.S., and when it increases its military presence there, that is akin to an owner fencing in his yard to prevent trespassing.

That belief -- and only it -- is why American officials can announce with a straight face: we're interfering further in this region in order to prevent "outside interference" in this region (from nations that are actually in that region). I don't expect Hillary Clinton to point any of that out, but perhaps the New York Times might, rather than just publishing these laughable official decrees without comment.

As I noted yesterday, I'll be on the West Coast this week, and there are two events I want to highlight:  one in San Francisco, on November 2 at 6:00 p.m., that is free and open to the public, where I'll be discussing my new book with Salon Founder and CEO David Talbot (event information is here), and a just finalized event in Los Angeles, the morning of November 2, at UCLA School of Law (event information here). It's been several years since I was at an event in San Francisco and I really think the November 2 night event will be worth attending, so I hope to see as many readers in the Bay Area as possible there.

UPDATE [Tues.]: The Kindle version of my new book, With Liberty and Justice for Some, is now available for ordering here.  And Antiwar.com this morning has published an excerpt from the book examining why the political and media classes joined together to demand no investigations or prosecutions of Bush-era crimes; that excerpt can be read here.