With police using pepper spray in Denver and restraint in Nashville, the struggle to control public space continues 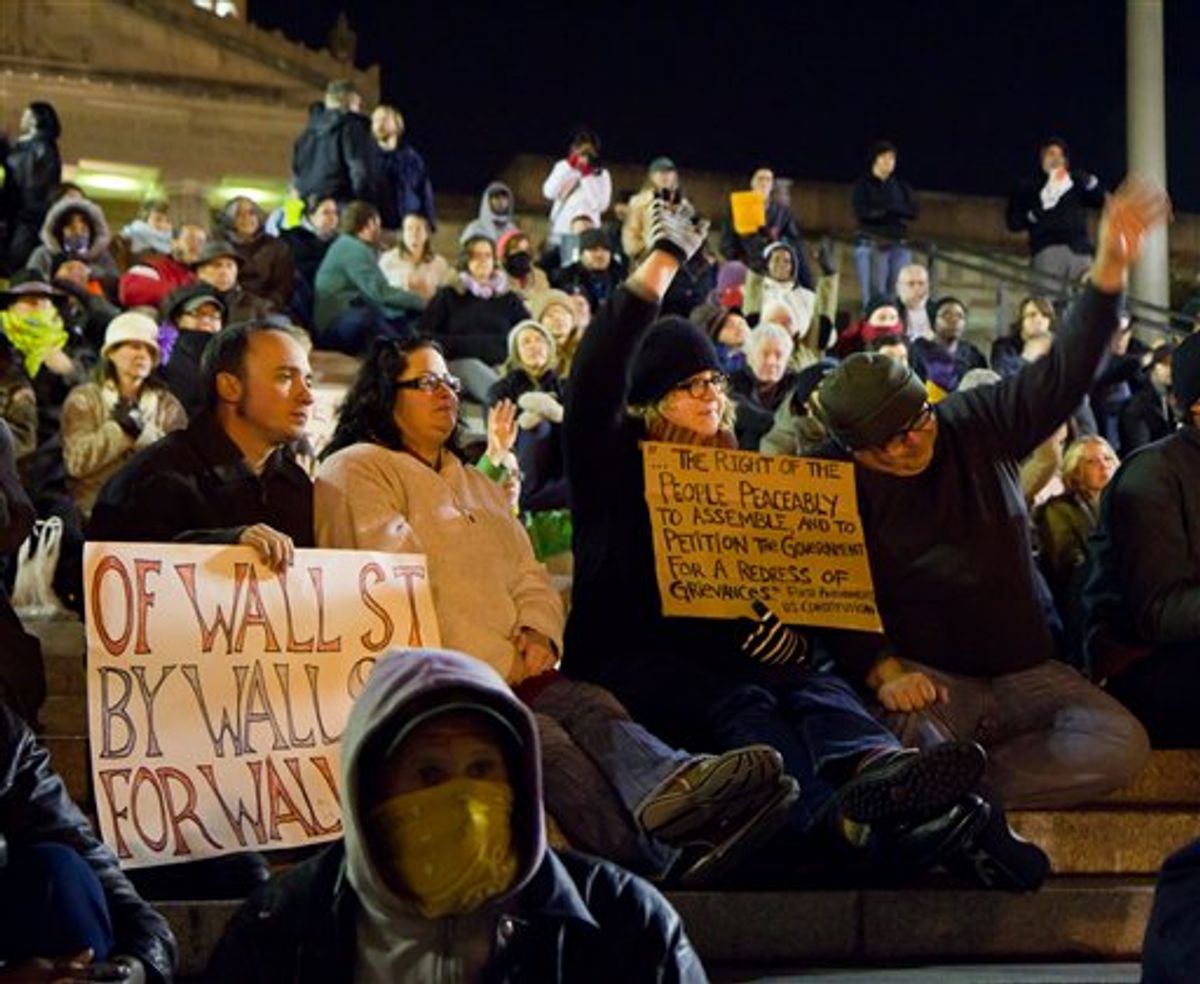 Protesters affiliated with the Occupy Wall Street Movement are seen at the Tennessee Capitol on Friday. After curfew arrests on Friday and Saturday, state police let the demonstrators stay through Sunday morning without detaining anyone(AP Photo/Erik Schelzig) (AP)
--

Nearly 100 people were arrested at Occupy Wall Street protests nationwide, as the movement continues its bid to create a new public space for talking about inequality and corporate power.

In Denver a clash between police and demonstrators on Saturday night ended in a cloud of pepper spray and the arrest of 15 people who were attempting to reestablish a camp near the state Capitol. Protesters have been staying in the park for weeks, but police have repeatedly removed their tents. The demonstrators held a candlelight vigil on Sunday blaming police for the chaos and accusing officers of excessive force.

"I hope our actions will help the American people see how determined we are," one demonstrator told a local TV station. "The police were under orders. They do their job. The problem isn't with the police. It's with the people who tell the police what to do, and that's the politicians."

"We feel like we made an important point," Occupy Portland media liaison Jordan LeDoux told the Portland Mercury. "Your First Amendment rights don't end at a park block and they don't end at midnight. How silly it is that we have police wandering around arresting people who are peacefully protesting when we have Wall Street bankers who have committed crimes still wandering around?"

In Austin, Texas, police arrested 38 people for criminal trespass early Sunday morning, after the occupation movement established a food table that authorities said was forbidden. But the Statesman American reports the movement and authorities "have been communicating regularly and making concessions."

Protesters have agreed to move during thrice-weekly power washings. And the city has not enforced its camping ban, allowing protesters to sleep on City Hall stairs without objection.

In Richmond, Va., police broke up a camp in the city's Kanawha plaza early Sunday morning and arrested 12 people for trespassing. One TV station is reporting the area is going to be fenced off to prevent future occupations.

In Nashville, the occupation movement scored at least a temporary victory when authorities chose not to arrest protesters near the state Capitol early Sunday. In a third consecutive night of protest, the demonstrators chanted slogans and danced to stay warm into the early hours, but unlike the previous two nights no one was arrested for curfew violations.

“This is what victory looks like!” shouted Michael Custer, part of the group that was expecting  to be detained. It was the first time since Thursday, when the state imposed a curfew on Legislative Plaza, that state troopers didn’t take protesters to jail.

One reason for the restraint may have been that magistrate Tom Nelson tossed out nearly 50 warrants for protesters arrested since Thursday. Nelson said state officials have no authority to set a curfew requiring the protesters to clear out or face arrest.