Pick of the week: "A Very Harold & Kumar 3D Christmas" 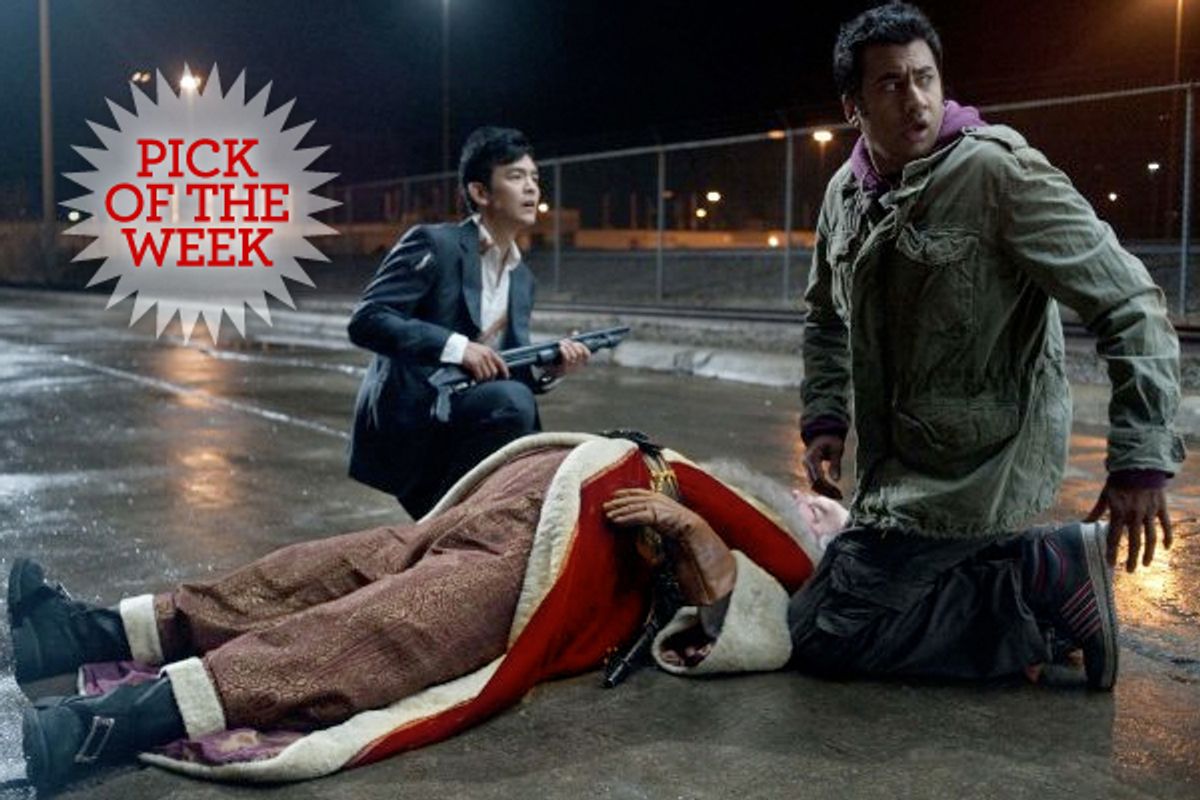 Is the first week of November, before we've finished eating the Halloween candy, too early for a Christmas movie? Ordinarily my answer would be abso-freakin'-lutely, but when the movie in question is a disgusting, anarchic celebration of drug abuse and random violence, complete with free-floating ethnic stereotypes, an evil Claymation snowman, a self-explanatory hit Yuletide toy called the Wafflebot, the most preposterous self-mocking Neil Patrick Harris performance in the long history of such things and a pilfered scene from "Madea's Family Reunion" -- well, it's never too early for that, is it?

Early in "A Very Harold & Kumar 3D Christmas," Harold Lee (John Cho), who has grown up into a yupped-out, suit-wearing financial whiz with a house in the 'burbs, asks a servile underling, "Hasn't the whole 3-D thing kind of jumped the shark?" (Said underling has promised to find Harold a 3-D HDTV that will be so awesome "it makes 'Avatar' look Avatarded!") So it has, and never has a shark been so thoroughly and ingeniously jumped as in the third installment of the stoner-bromance comedy franchise built around Cho and co-star Kal Penn, which is full of imaginative, outrageous and egregiously insulting 3-D gags. I saw this movie at a critics' screening in the Warner Bros. building in midtown Manhattan in the middle of the afternoon, and the normally stonefaced crowd succumbed to widespread braying, snorting and guffawing. You could almost smell the fifth-generation unsexed Congolese skunkweed. (I said almost.)

Time often passes more slowly in movieland than in the real world, but in Harold and Kumar's universe the opposite appears to be true. Numerous years have passed since our Asian-American dynamic duo escaped from Guantánamo Bay (without eating the fabled cock-meat sandwich) and got baked with George W. Bush, in a scene that made me feel some genuine human sympathy for President No. 43. And you know what happens as boyhood friends grow up: They drift apart, and sometimes it might just take the magic of Christmas -- Santa Claus, and Jesus Christ, and Ukrainian mobsters and Neil Patrick Harris and lots and lots of narcotics -- to make them understand what's really important in this world.

Harold makes a lot of money and feels only slightly bad about the Occupy-type protesters outside his Manhattan office building, and lives in a Christmas-bedecked New Jersey domicile that's about to be invaded by his intense Latino father-in-law (Danny Trejo) bearing a 12-foot Fraser fir he grew himself. Harold has given up the ganja and pretty much lost touch with his old pal Kumar Patel (Penn), who still lives in their old apartment with no job, no girlfriend and a beard approaching Grizzly Adams dimensions. His thoroughly reprehensible new best friend, Adrian (Amir Blumenfeld) tries to get him to come to some party full of allegedly deflowerable teenage virgins, but Kumar isn't interested. "No, I gotta stay here and smoke this weed. Otherwise I won't get high."

But never fear: This is indeed a Christmas movie, and when a mysterious package arrives addressed to Harold, Kumar knows he must deliver it in person. As for the package ... well, I'm spoiling nothing by telling you it contains a ginormous doobie, but what it really contains is a message of holiday love that will bring together the best-loved East Asian-meets-South Asian comedy duo of the 21st century. Also, it will burn down Harold's father-in-law's beloved Christmas tree and send Harold and Kumar out into the streets on Christmas Eve to negotiate with faux-ghetto tree salesmen (one of them the rapper RZA), introduce a baby to marijuana, cocaine and untold other illicit substances, interrupt a party of naked lesbian nuns and encounter a genuine, if distressingly gory, Christmas miracle.

"Harold & Kumar" creators Jon Hurwitz and Hayden Schlossberg have once again written the screenplay but have handed the director's chair over to newcomer Todd Strauss-Schulson, and it's absolutely the right choice. (Yeah, I'm pretty sure those guys are all Jewish, but hell -- nobody's ever crafted Christmas entertainment like the people of the Torah.) They directed "Harold & Kumar Escape From Guantánamo Bay" themselves, and while that movie's plenty funny, it lacks either the classic teen-oriented pacing of the original 2004 "Harold & Kumar Go to White Castle" or the outrageous Busby Berkeley production values of this one. I shouldn't tell you too much more about the giddy excess of "A Very Harold & Kumar 3D Christmas" -- and for once, you really should pay the extra few bucks for those glasses -- but it's pretty much one ridiculous set-piece after another, and you absolutely don't need to be wasted to enjoy them. (I'm not saying that wouldn't be awesome.)

I've already mentioned the Claymation bad-trip sequence featuring a vengeful snowman, but that may not even be as funny as the sentimental montage sequence explaining Danny Trejo's impoverished childhood, or Kumar's pornographic fantasy involving the near-total demolition of the Catholic Church. And then there's Neil Patrick Harris, a consummate entertainer of our time, who somehow manages to be completely authentic and blissfully fake at the same time. Ah, NPH, how do I love thee? Let me count the ways. Harold and Kumar encounter Neil again as the star of a Radio City-style holiday pageant, and then venture backstage with Neil and his boyfriend to hear him explain how he cheated death in "Guantánamo Bay." I'll merely hint that if you were suspicious that the whole gay thing ("homo-crap," in Neil's words) might be an elaborate front, you're on the right track. After dispensing some sage advice and disgusting vulgarity, Neil assures our heroes that he'll see them "in the fourth one." We can only hope.