The one break that Herman Cain has caught this week

It's been a rough week for the GOP, but damning details about his alleged conduct have been elusive -- so far 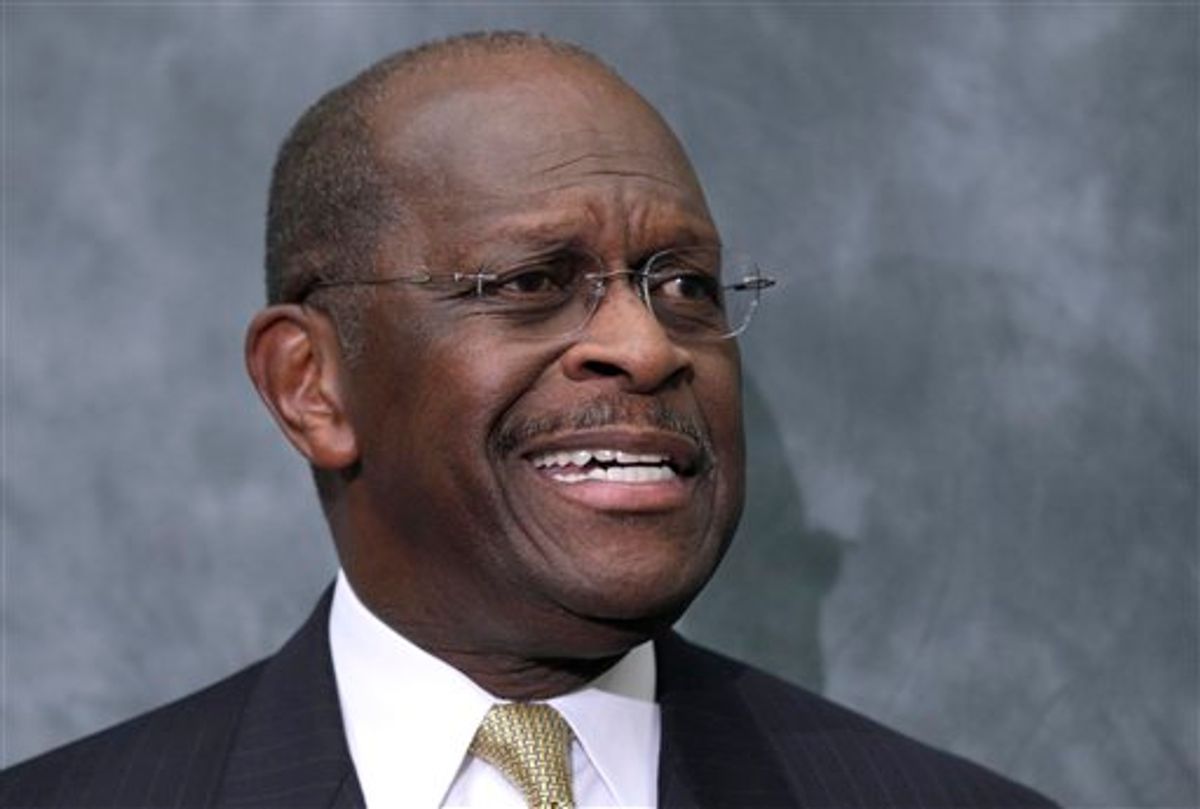 In spite of his best efforts, Herman Cain has managed to catch at least one break this week: As his sexual harassment scandal enters its fifth full day, we still have only the vaguest idea of what, exactly, he was accused of when he ran the National Restaurant Association in the late 1990s. We know the complaints dealt with alleged sexual harassment, but that could mean ... almost anything.

This lack of damning details has so far allowed Cain to enjoy support from some of the right's most influential voices, like Rush Limbaugh, who once again used his show on Thursday to paint Cain as the victim of "a largely irrelevant media ambush." And so far, there's been no drop-off in his support among Republican voters. An ABC News/Washington Post poll released this morning finds him at 23 percent in the national GOP horse race, just one point behind Mitt Romney (24 percent).

But even Limbaugh, who has been the loudest purveyor of the Cain persecution narrative, allowed on Thursday for the possibility that the GOP candidate actually did engage in inappropriate behavior, saying that "if it's true, that's the bottom line here," and urging listeners not to be upset if a rival GOP campaign leaked the information (as long as it's true). It was as if Limbaugh was preparing himself for the shift in message that will be required if more revelations surface and it becomes impossible to defend Cain any longer. This is probably wise on Rush's part, because while solid information has been hard to come by this week, there also seems to be an inevitability to the reporting. Very, very slowly one new piece of information after another is emerging, and there's reason to believe that, one way or another, we will ultimately know exactly what the two women who received settlements from the NRA accused Cain of doing.

The momentum is obvious. Last Sunday night, Politico reported that two women had accused Cain of sexually suggestive behavior during his NRA days and that both women subsequently left their jobs while receiving cash settlements and signing non-disclosure agreements. Cain responded by issuing a blanket denial of ever sexually harassing anyone. Then he admitted that he had been accused of it while at the NRA, but said the allegation was baseless, that he'd been exonerated by an internal investigation and that he was "not aware" of any settlement being paid. Then he claimed to remember what one of the women had complained about -- "I made a gesture saying, 'You are the same height as my wife'" -- and acknowledged there had been a settlement as part of a severance package, but that it had been a modest one, "well within the range of what we would do if we had an amicable separation between the association and an employee." On Monday, he suggested it might have been for about two or three months of the woman's salary; on Tuesday, he said it might have been three to six months.

But this didn't hold up either. The lawyer for one of the accusers then announced that his client would seek to have the non-disclosure agreement waived so that she could make clear publicly that Cain did harass her; he now says that she won't come forward herself but is seeking the NRA's approval to release a statement -- and that if the NRA balks, he will apply public pressure. Now we've learned that one settlement was apparently for $35,000 and the other for $45,000.

And details, vague though they may be, are beginning to leak into the press. Politico reported Thursday afternoon that there had been "urgent discussions" of the accusations made by the woman who received the $35,000 settlement by top NRA officials "within hours" of when the alleged incident occurred.  Politico provided this description of what happened:

The woman in question, roughly 30 years old at the time and working in the National Restaurant Association’s government affairs division, told two people directly at the time that Cain made a sexual overture to her at one of the group’s events, according to the sources familiar with the incident. She was livid and lodged a verbal complaint with an NRA board member that same night, these sources said.

The woman told one of the sources Cain made a suggestion that she felt was overtly sexual in nature and that “she perceived that her job was at risk if she didn’t do it.”

The New York Times, which reported on the same incident in a story posted overnight, provided this account:

The advances were said to have taken place during a festive night in which Mr. Cain and several younger staff members drank until late in the evening, and his flirty banter with the woman crossed over into propositions that she leave with him, these people said, speaking in separate interviews and on the condition of anonymity.

One person with direct knowledge of her account at the time said that the woman — roughly two decades Mr. Cain’s junior and serving in a lower-level job — rebuffed him but that he continued to make advances. “She was uncomfortable, and it was inappropriate from the start,” this person said. “He was persistent.”

So we've gone from Cain playing dumb about settlements to learning that the NRA paid out $80,000 to his accusers, and now the nature of the specific allegations is slowly coming into focus. The press is not going to stop chasing this story and people in the know are clearly talking, and it seems like just a matter of time before a complete picture develops. This won't necessarily be devastating for Cain. Maybe the alleged conduct falls somewhere short of clear, obvious, indefensible sexual harassment. Many wouldn't have believed when this story broke Sunday night that he'd still be at the top of the pack in the polling at the end of the week. But if there's some sort of smoking gun here, it's probably going to be revealed eventually.