The myth of the progressive city

With mayors like Bloomberg and Emanuel, urban areas have become bastions of privatization and corporatist economics 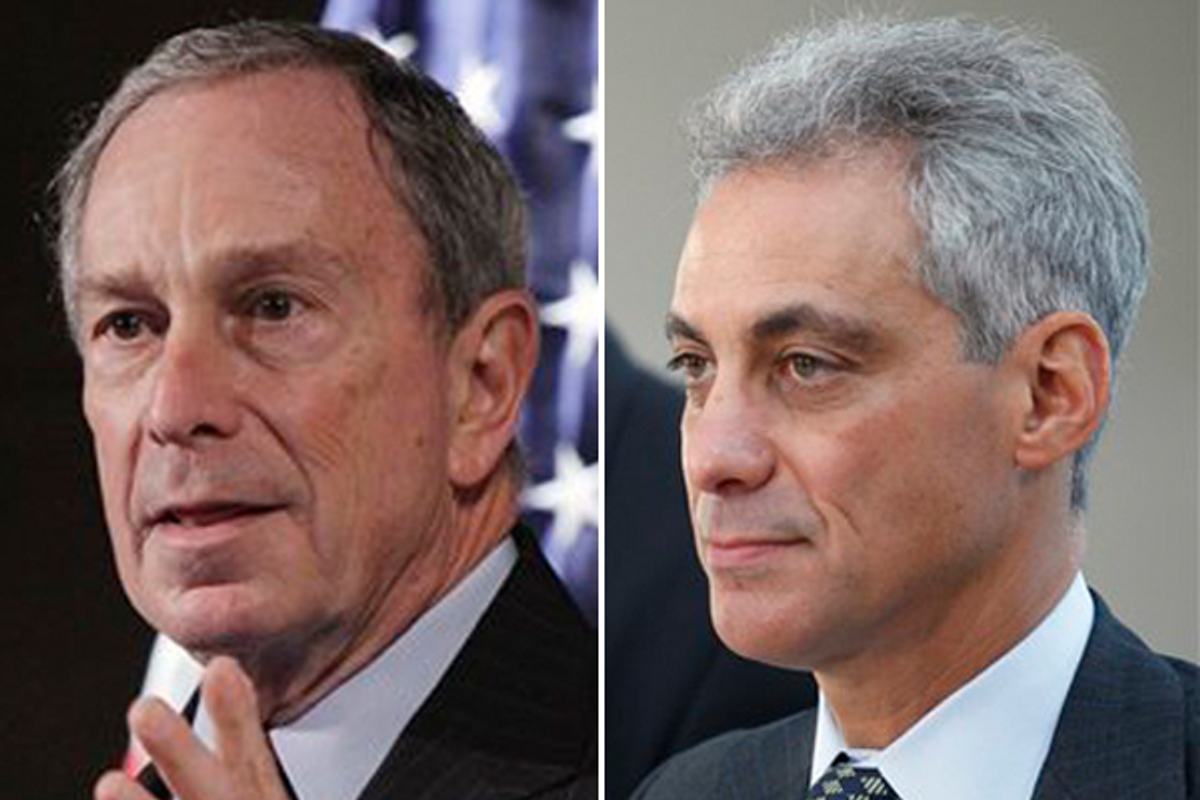 If you've listened to a political pundit predict any election in the last 50 years, you've been told that there are Republican small towns whose politics are organized around the three G's (guns, God and gays) and there are Democratic cities whose politics are organized around the two L's (labor and economic liberalism). While this binary mythology is insulting for its hackneyed stereotyping and lack of nuance, it has at least half the story right -- in terms of sheer partisanship, many rural areas do tend to go red, and many urban areas do tend to go blue.

Where this story goes wrong is in its ideological suppositions about the cities -- and specifically, about Democratic cities. Sure, two or three decades ago, there may have been some truth to the notion that the American city is a union-driven bastion of populist progressive economics. But today, while cities may still largely vote Democratic, they are increasingly embracing the economics of corporatism. The result is that urban areas are a driving force behind the widening intra-party rift between the corporatist, pro-privatization Wall Street Democrats and the traditional labor-progressive "Democratic Wing of the Democratic Party."

Start with a look at Chicago, the metropolis most identifiably (and inaccurately) branded as a hotbed of labor power and liberal economics.

In recent years, the Windy City has become "the most aggressive city in the United States in the privatization of public infrastructure," according to the Public Interest Research Group. Citing the city's budget crisis, officials have sold off highways and parking meters at cut-rate prices -- all to pad the profits of corporate investors (the schemes are now being explored by other Democratic cities including Pittsburgh and Los Angeles). Despite this, during its once-in-a-generation contested mayoral election in 2010, the city's voters chose investment banker Rahm Emanuel over other far more economically progressive candidates, and Emanuel quickly filled his administration with corporate consultants eager to accelerate the privatization already under way. Now, Emanuel has declared war on organized labor, with the Associated Press's headline blaring "Even in Chicago, Mayor Goes After Labor Unions."

A similar trend is happening in my home city of Denver.

As in Chicago, lazy reporters and pundits equate the Mile High City's votes for Democratic candidates as proof of the city's alleged affinity for liberal economics. But Denver is today embracing right-wing economic ideology -- and that ideology's politician-promoters -- with the zeal of Colorado Springs.

A few years ago, the city saw one of right-wing billionaire Phil Anschutz's corporate takeover specialists, Michael Bennet, appointed school superintendent and then use his power to thrust the public schools' finances into the hands of his friends on Wall Street. The move effectively forced Denver taxpayers to use money for public schools to subsidize the profits at financial behemoths like JP Morgan. Nonetheless, when Bennet turned around and ran for Senate on huge campaign contributions from the very financial sector that he helped fleece Denver taxpayers, the city rewarded him, first by giving him higher-than-expected vote totals to defeat a progressive primary challenge, and later by delivering him the general-election margin of victory.

In the last year, Denver has moved even farther to the economic right. In early 2011, it elected Michael Hancock, the most economically conservative mayoral candidate in a large field of choices -- a man who, as mayor, has made headlines by effusively complimenting George W. Bush; appointing a top Republican who previously headed a corporate front group as his chief of staff; pressing for so-called education "reforms" specifically aimed at undermining the teachers union; and starring in television ads railing against a progressive ballot measure that would mandate employers allow workers to accrue paid sick days.

Seeing that conservative political trend, record-setting amounts of corporate money subsequently flowed into the city's major elections this fall. The result? A city which just a few years ago voted to raise taxes to support public services voted down a progressive state ballot measure to better fund education in a state that -- compared to others -- disproportionately underfunds its schools. It also succumbed to a massive corporate-financed campaign and rejected the paid sick days initiative (which had initially polled well). Additionally, it preserved a school board majority that has already aggressively worked to undermine traditional public education.

On education, the Democratic-voting city of Washington, D.C., was the place that launched the political career of Michelle Rhee, the face of the right-wing effort to siphon public school money into private schools; Democratic Los Angeles has seen a successful Wal-Mart-funded effort to encroach on traditional public education, with more privately administered "public" schools than any district in the country; and Democratic New Orleans has seen a wholesale charter-ization of its schools.

On economic justice issues, the Democratic-voting city of Philadelphia saw its popular mayor veto paid sick days legislation (it ultimately passed over his objections) while Democratic-voting cities like Oakland, Boston and Denver have led the way in deploying their police forces on peaceful Occupy Wall Street protestors.

On spending issues, Democratic-voting cities across the country have simultaneously slashed social services while offering up huge taxpayer subsidies for stadiums, corporate office buildings and other private, for-profit projects.

And on tax issues, Democratic-voting New York City has seen its billionaire mayor become the national champion of regressive tax cuts for the wealthy.

Though Bloomberg is officially an independent, his brand of politics perfectly epitomizes the radical shift in urban economic ideology from one of labor/progressive traditions to a now-familiar greed-is-good crony conservatism -- all under the veneer of liberalism. Like now-standard Democratic Party corporatism that puts a velvet glove of equal rights rhetoric over the brass knuckles of Big Business cash, his formula relies on a larger realignment of liberal orthodoxy away from economics and toward social issues. As Rolling Stone's Matt Taibbi put it:

[Bloomberg] is a billionaire Wall Street creature with an extreme deregulatory bent who has quietly advanced some nastily regressive police policies... but has won over upper-middle-class liberals with his stances on choice and gay marriage and other social issues.

Bloomberg’s main attraction as a politician has been his ability to stick closely to a holy trinity of basic PR principles: bang heavily on black crime, embrace social issues dear to white progressives, and in the remaining working hours give your pals on Wall Street (who can raise any money you need, if you somehow run out of your own) whatever they want.

He understands that as long as you keep muggers and pimps out of the prime shopping areas in the Upper West Side, and make sure to sound the right notes on abortion, stem-cell research, global warming, and the like, you can believably play the role of the wisecracking, good-guy-billionaire Belle of the Ball...

Though Taibbi was writing about Bloomberg specifically, his words aptly sum up what the American cityscape has become -- yet more scorched earth in the successful assault of Limousine Liberals and Crony Corporatists on Lunch-Pail Liberals and Progressive Populists. In political terms, it represents the broader success of the transpartisan moneyed class in fully redefining "liberal" exclusively as "social-issue liberal" -- without regard for economic agenda.

To be sure, most cities may never vote for openly declared Republicans (though it's worth noting that New York City did see a longtime Democratic congressional district go to the GOP a few months back). But official partisan complexion is far less significant in the day-to-day lives of most citizens than the rightward shift of public policy in America's biggest population centers.

This truism, which the red-versus-blue fetishists in our media and political arenas refuse to acknowledge, is well understood by movement conservatives (as just one example, here in Denver, it was major GOP donors that underwrote the nominally Democratic candidates who promised to preserve the corporate takeover of the city's school board). They get that, at the policy level, it doesn't really matter if cities votes for candidates who call themselves Democrats, independents or liberals, and it doesn't matter if reporters keep misrepresenting cities as enclaves of ultra-liberal economics -- as long as this breed of politicians continue getting urban areas to play their new role pressing the conservative economic agenda.