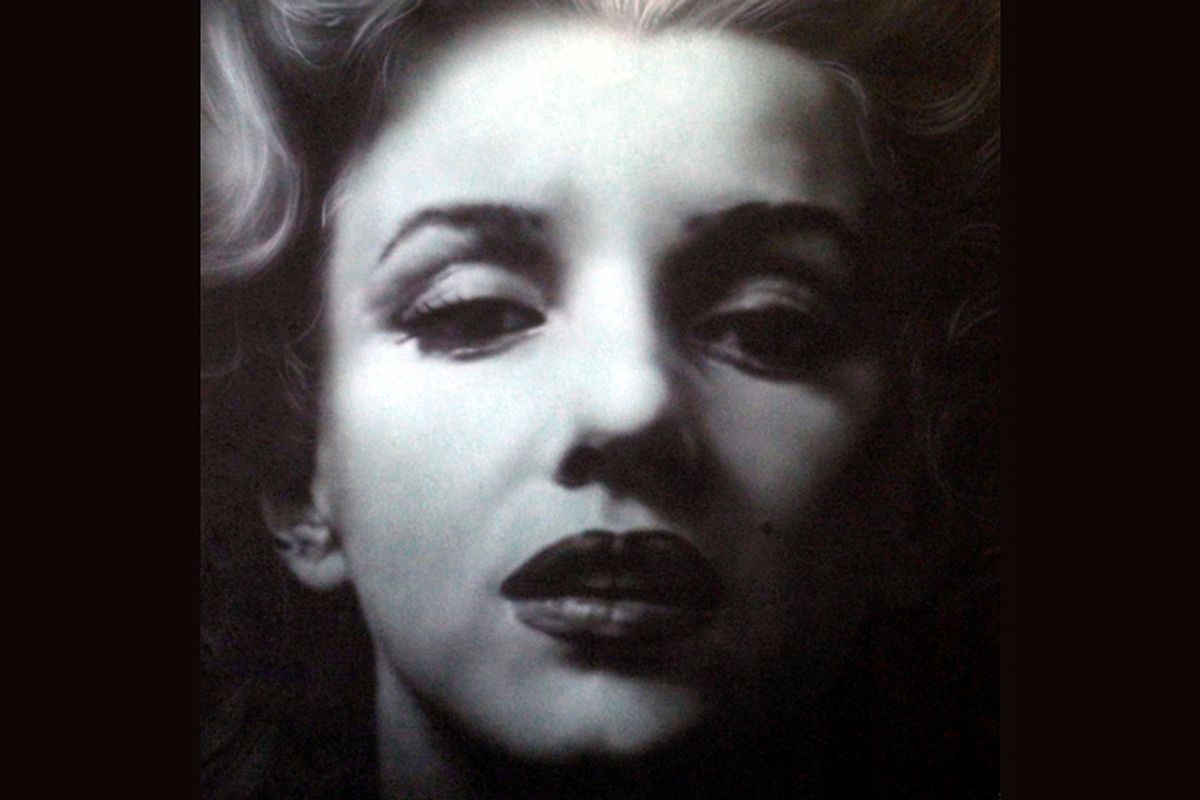 Just in case you thought the news that occasional morgue worker, temporary L.A. jail resident, and all-around train wreck Lindsay Lohan posing for Playboy wasn't agonizingly predictable enough, the magazine has announced that the photos will be a "classic tribute inspired by the original Tom Kelley nude pictorial of Marilyn Monroe." Oh, please, make it stop.

Of all the dead idols that we keep digging up, Marilyn Monroe crushes all competition. Sorry, Elvis. Sorry, James Dean. There's only so much to be done with sparkly jumpsuits and nice black pullovers. But Marilyn? She's almost inexhaustible. Note: almost.

Nearly 50 years after the former Norma Jeane Baker's death, the Marilyn homage has become the most clichéd thing possible for a starlet and a photographer. Which Marilyn do you want? Britney's youthful, boop-a-doop Marilyn, shilling for Pepsi? Jennifer Lopez's whacked out, poured into her dress, "Happy Birthday" Marilyn, serenading George Lopez? Steely blond Rihanna for Vogue? Scarlett Johansson's tousled, Joe DiMaggio-era Dolce and Gabbana Marilyn? Kate Upton's zombie twist on "Seven Year Itch" Marilyn? Nicole Kidman's fragile "Some Like It Hot" incarnation? Kim Kardashian's "tooling around with Arthur Miller" period Monroe? Last month, even Lady Gaga put her own spin on the star, wearing a flesh-colored outfit as she performed for Mis-ter Pres-i-dent Bill Clinton. At least Michelle Williams' reincarnation of Marilyn comes with a full new movie attached, possibly even written by a human who didn't just stop the concept at the words "Marilyn" and "Monroe."

Then there are the Marilyn Hall of Famers. Let's give a special shout-out, then, to Gwen Stefani, Christina Aguilera, Paris Hilton, every Guess jeans ad campaign, and all-time-champion Madonna, who have again and again throughout their careers proven a fierce determination to ride Marilyn Monroe's image all the way to their own graves. Well done, folks. Even Monroe herself got tired of playing Marilyn Monroe after just 36 years. Would that she'd had your collective stamina in this onslaught of Monroe-verload.

But the one woman currently most hell-bent on filling the icon's Chanel No. 5 has to be Lindsay Lohan. In 2008, she re-created Bert Stern's legendary nude "last sitting" with Monroe for New York magazine, in a spread shot by Stern himself. "It was very similar, déjà vu you might say," Stern said of the experience. "Like revisiting an old street." And what's more interesting than walking down an old street? Oh, that's right -- everything.

Now, both Playboy and Lohan are going down another old street, this time with Tom Kelley's notorious 1949 pinup images of the very young and very naked starlet. It's nothing if not proof that Playboy and Lohan combined have not enough spark or creativity to do something that isn't itself derivative of an idea even Anna Nicole Smith already covered before she shuffled off this mortal coil.

In a statement, a rep for the dentally challenged actress said Monday that "The pictorial is absolutely fantastic and very tasteful." Hefner himself has assured readers hungry to feast upon the spectacle of a troubled star posing as a troubled and dead star that "Oh yes," Lohan goes full monty for the pictures. But he adds that the whole thing is "classy. Very classy." At this point, the Playboy/Lohan definition of "very classy" seems to be "anything shy of a vagina cam."

Would the Monroe myth be so indelible if she'd settled down and had a family? If she'd grown old and died like a mere mortal woman? Or is the fascination because she stayed forever youthful, forever vulnerable, forever a big hot mess? Disaster has its allure, for sure. But the constant dredging up of Marilyn stopped being sexy and interesting a long time ago. And though fulfilling morbid curiosity while providing sad spank fodder may be the only career option left for Lohan -- assuming she's not really into that gig down at the morgue -- it's time she and her platinum-tressed, baby-voiced ilk took a goddamn hike. Because at this point, the Marilyn thing isn't like some some cute musical number from "Gentlemen Prefer Blondes." Instead it's like an episode of "American Horror Story" -- a freaky alternative reality, one in which a long deceased beauty just keeps clawing her way back into willing new bodies, again and again and again – and boring her victims to death.