So what if they're expecting again? A family of 20 is just another side of reproductive choice 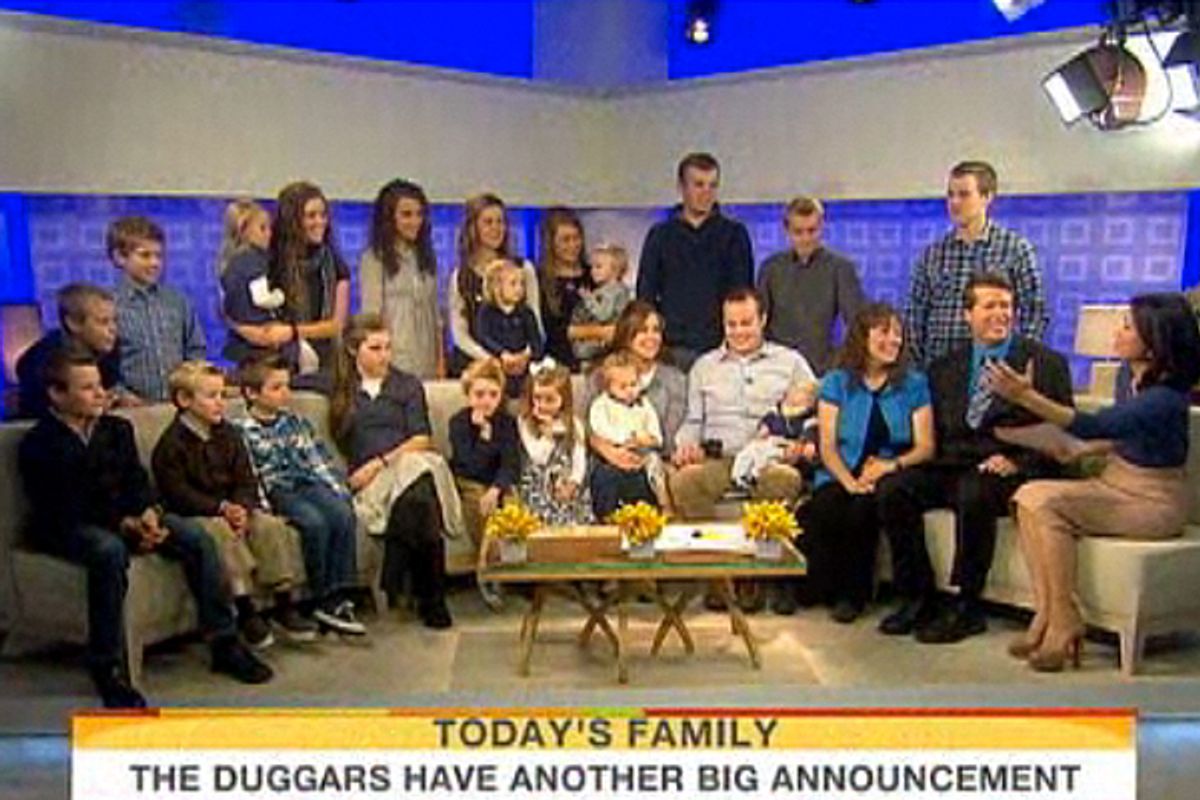 Our famous families have their specialties. And just as surely as Kardashians like to get engaged and Lohans get arrested, the Duggars excel in the field of making more Duggars. So that's exactly what they're doing. But as the family gets ready to welcome its 20th member, has America's fertility freak show crossed the line?

The spectacularly fecund Duggars entered the reality game already way ahead of the Gosselins, and even left Octomom Nadya Suleman in the dust. They've been a source of weird fascination ever since they welcomed their 15th child on their first television special seven years -- and five pregnancies -- ago. And each time their brood increases, so does the public scorn. Along with occasional good wishes, commenters on the L.A. Times website have been writing things like: "How about you bolt your knees together?" and "Lady, your hooha isn't a clown car!"

The 45-year-old Michelle Duggar sees it a little differently. Before appearing on the "Today" show Tuesday, she said, "I was not thinking that God would give us another one, and we are just so grateful." God, unfortunately, could not be reached for comment. On their TLC Web page, a stiffly "Oh Lord I am so screwed"-looking Jim Bob Duggar says, "Wow. I can't believe it. Twenty. I can't… I thought we'd maybe have two or three. It's a miracle. Twenty. It blows my mind. I'm sure it blows your mind. This is amazing" (trails off in hyperventilating quasi laughter).

Unlike their enthusiastic baby-making TV peers like the Gosselins and Octomom, the Duggars are not fertility-treatment espousing litter droppers. In fact, their strange allure stems from precisely the opposite place – the fact that Joe Bob Duggar's sperm count is to fertility what Ted Williams' batting average is to baseball. Off the freakin' charts. The couple have two sets of twins, but basically they've been cranking out kids since the '80s at roughly the same measured pace that Woody Allen releases new movies. They're not living on public assistance; they're not asking for your money. They're just a nice Christian family from Arkansas who could teach tribbles a thing or two about breeding.

Nevertheless, Americans seem to have a strained relationship with the family, with a tremendous amount of moral outrage attached. Michelle Duggar is not the spry 20-something she was when she got into this game. She's now a grandmother in her mid-40s. During her last pregnancy two years ago, she developed life-threatening preeclampsia. When daughter Josie was delivered at 25 weeks, she weighed 1 pound, 6 ounces. (The toddler is doing fine now.) Though Jim Bob Duggar says, "Michelle is probably in better health now than she was 10 years ago," a lady with 19 other kids and a history of preeclampsia heads into another pregnancy with considerable challenges.

That's why both MSNBC and Fox News today asked if the latest pregnancy was "safe." "Today" contributor Dr. Nancy Snyderman, meanwhile, called it "a high-risk pregnancy," adding "That uterus can't have any spring in it anymore." More bluntly, a CNN commenter Wednesday wrote, "Can somebody spay and castrate this couple?"

The idea that any humans -- even those with the religious conviction and financial means to do so -- would keep adding to a family of super-size proportions seems all but, well, inconceivable. Add to it the very real risk that someday luck runs out on these folks, combined with the sideshow aspect of an unusual clan, and you've got perfect conditions for a whole heap of public scolding.

Yet on their TLC site, Michelle says, "We are really, really thankful" for this new child. Jim Bob adds, "I know a lot of you out there think, 'What have they done?' But … we consider each child a gift and a blessing from God. And our goal is to train our children to love God and to serve others and hopefully make a difference in the world."

We all consider our children blessings. I named my second child Beatrice precisely because it means blessing. I also think Mirena is a beautiful name, because it's the device that assured I could not get knocked up 18 more times after my lovely Beatrice.

I have a friend expecting a baby she already knows has a heart condition and Down syndrome. She told me the other day, "People keep saying, 'Maybe the doctors are wrong. Maybe there will be a miracle.' Why can't they understand that maybe this baby is the miracle, just as he is?" The Duggars are similarly holding steadfast to their belief that miracles don't look the same to every set of eyes. And they see baby 20 as just as much of a blessing as No. 1 . The Duggars' blessings aren't yours or mine. They've made choices few of us would, but they've determined to accept them with as much grace and gratitude as they can muster. Because this is what reproductive freedom and choice look like. And as long as there's still spring in Michelle's uterus, they're going to keep going – 20 and counting.