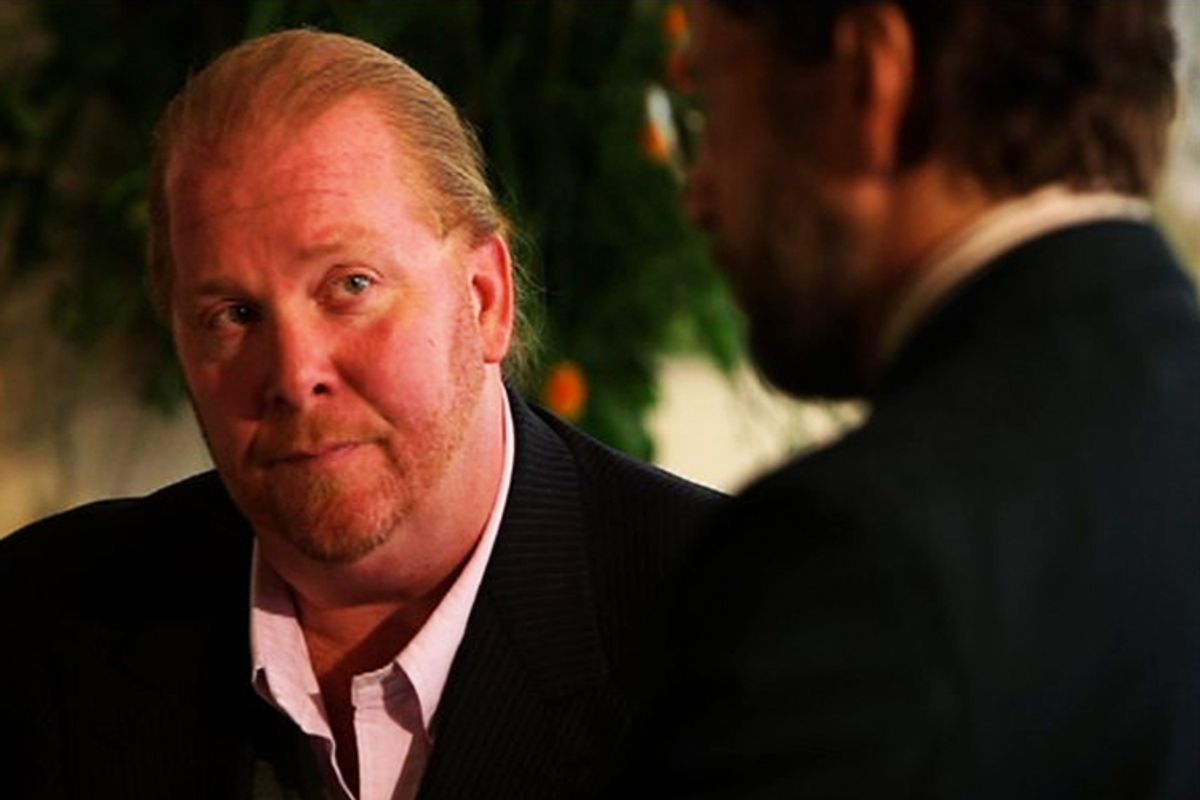 Celebrity chef Mario Batali can get away with flamboyancies like wearing his coveted orange Crocs and riding his Vespa around the West Village. But what he can't pull off is haphazardly comparing Wall Street executives to Hitler, as he did Tuesday at a Time magazine panel.

“The ways the bankers have kind of toppled the way money is distributed and taken most of it into their hands is as good as Stalin or Hitler and the evil guys,” Batali said. The ritual post-Hitler reference apology followed soon thereafter: “It was never my intention to equate our banking industry with Hitler and Stalin, two of the most evil, brutal dictators in modern history.”

So why is the Hitler reference so hard for public figures to avoid? You'd think it would be the first rule of celebrityhood, handed to all dreamers as they get off the bus in New York or Hollywood: Whatever you say, leave Hitler out of it. (Unless  you're making one of those Internet viral videos of Hitler reacting to pop culture news.)

But Batali’s blunder is just the latest in the last six months. Megan Fox was quickly dismissed from her "Transformers" role in June, after comparing director Michael Bay to the father of fascism. “He wants to be like Hitler on his sets,” she gaffed. Stephen Spielberg was less than thrilled.

In August, Kanye West, while onstage at the Big Chill Festival in the U.K., made the perplexing connection between his numerous haters and Hitler’s. Just last month, Hank Williams Jr. lost his "Monday Night Football" gig for suggesting if President Obama and House Speaker John Boehner spent an afternoon on the links, it would be like "Hitler playing golf with Israeli Prime Minister Netanyahu."

Some Hitler referencers think they are trying to make sophisticated points, or have the hubris to believe they can walk the third rail without getting electrocuted.  “Hitler was a Frankenstein, but there was also a Dr. Frankenstein. German Industrialists, the Americans and the British. He had a lot of support," said Oliver Stone. "Hitler did far more damage to the Russians than the Jewish people.” He ended up apologizing. John Galliano, the Christian Dior designer, likely believed he was being daring when he said he loved Hitler. He lost his job and a French court fined him $8,400 for using anti-Semitic language.

And who knows what Lars von Trier was thinking in May when, promoting "Melancholia" -- and as Kirsten Dunst sat next to him in agony -- said, “I understand Hitler,” and “He’s not what you would call a good guy but I’m … I understand much about him and I sympathize with him a little bit.” He got booted from the Cannes Film Festival.

While many of these celebrities are known for unpredictable commentary, the conundrum lies in the near epidemic level at which Hitler is freely referenced without context, rhyme or reason. It seems that for these celebrities, to mention Hitler usually turns out to be like using a machine gun to scratch an itch. It’s retroactive, dangerous and self-destructive. And yet these instances keep growing in number.

Los Angeles psychiatrist Soroya Bacchus sees narcissism at the heart of the matter.

“Kanye West, Megan Fox, and celebrity chef Mario Batali (among many others) all share one common personality trait – narcissism. When a person, celebrity or not, has narcissistic tendencies, they are more prone to identify with people in positions of power," she said. "When Kanye and other celebrities make Hitler comparisons without regard, it’s because they feel they exist on a similar plane to him in terms of influence rather than identifying with his belief system.

"The ego-driven mind causes celebrities to see themselves as being as powerful as men like Hitler, and therefore imbeds the belief system that they have a right to reference him – often without regard for normal social stigmas."

Not everyone, however, agrees that Hitler should be off-limits for historical comparison.

Laura Kipnis, author of "How to Become a Scandal: Adventures in Bad Behavior," has an easier time letting Batali off the hook. In her opinion, his comment wasn’t so far out of context.

“I have a hard time mustering criticism about Batali's remarks because I basically agree with him: the bankerati are evil, and the names Hitler and Stalin are available synonyms for evil. To try to enforce greater precision in political speech in the current context, the age of shock jocks and Ann Coulter, seems almost quaint.

But public relations veteran Howard Bragman, the vice chairman of Reputation.com, says there's an easier lesson to learn. "I wish some of these celebrities would read publications that have covered the other celebrities that made this same mistake and learn from it. Using a Hitler comparison is almost always a mistake. It's never funny and it's never a good point of comparison."

On the other hand, he said, Batali might be thankful he made his gaffe this week -- when folks like Joe Paterno, Rick Perry and Herman Cain have been in slightly hotter water.