Don't even think about cutting the deficit

Until unemployment is back down to 5 percent, budget reduction shouldn't be part of the conversation 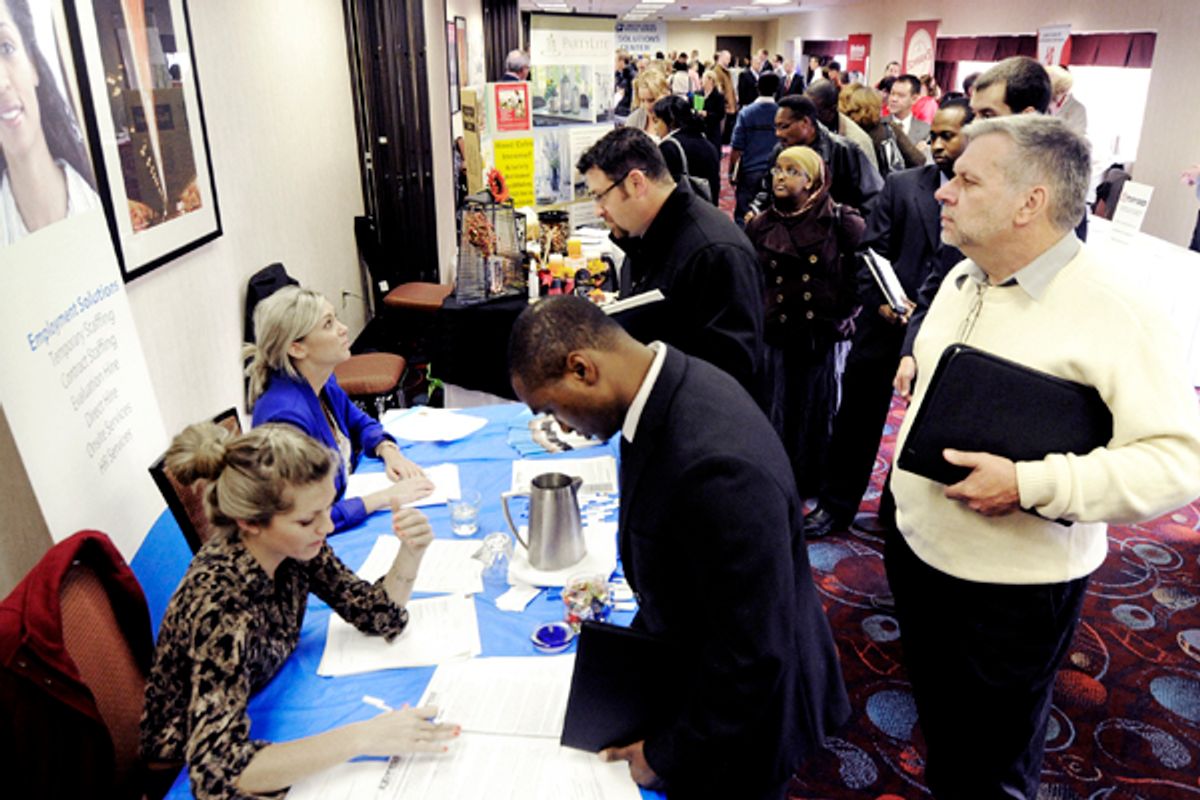 On planet Washington, where reducing the federal budget deficit continues to be more important than creating jobs, everyone is talking about “triggers” that automatically go into effect if certain other things don’t happen.

Yet no one is talking about the most obvious trigger of all — no budget cuts until the official level of unemployment falls to 5 percent, its level before the Great Recession.

The biggest trigger on the minds of Washington insiders is $1.2 trillion across-the-board cuts that will automatically occur if Congress’s supercommittee doesn’t come up with at least $1.2 trillion of cuts on its own that Congress agrees to by December 23.

That automatic trigger seems likelier by the day because at this point the odds of an agreement are roughly zero.

Here’s the truly insane thing: The triggered cuts start in 2013, a little over a year from now.

Yet no one in their right mind believes unemployment will be lower than 8 percent by then.

The cuts will come on top of the expiration of extended unemployment benefits, the end of a payroll tax cut, and continuing reductions in state and local budgets — all when American consumers (whose spending is 70 percent of the economy) will still be reeling from declining jobs and wages and plunging home prices. Even if Europe’s debt crisis doesn’t by then threaten a global financial meltdown, this rush toward austerity couldn’t come at a worse time.

In other words, what will really be triggered is a deeper recession and higher unemployment.

Democrats on the supercommittee are acting as if they haven’t met an unemployed person. They’re proposing $2.3 trillion in deficit reductions — half from spending cuts (including $350 billion from Medicare), half from tax increases. To make the tax increases palatable to Republicans, Democrats want to give Congress a chance to find the new revenues by overhauling the tax code. If that effort fails, automatic tax increases would be triggered. The top tax rate won’t rise (another bow to Republicans) but top earners’ itemized deductions will be limited.

Oh, and by the way, under the Democrats’ proposal, spending cuts and tax increases, triggered or not, would start in 2013.

The President (remember him?) is still hawking his $450 billion jobs bill, but he’s having a hard time being heard above the deficit-reduction din — in large part because he himself is simultaneously calling for deficit reduction, and most people outside Washington can’t make sense of how we do both.

The public is confused because they don’t get it’s a matter of sequencing. We need to do more spending now in order to bring back jobs and growth, then do less spending in the future — after the economy is once again generating jobs and growth.

That’s why it make more sense for Democrats to propose a deficit reduction plan that goes into effect only when jobs are back. The trigger should be the rate of unemployment — and a 5 percent rate would signal we’re back on track.

True, the unemployment rate is an imperfect measure of how bad things are (it doesn’t include everyone who’s working part-time but needs a full-time job, and those too discouraged to look for work), but at least it’s a useful way of comparing how much worse or better we are than we’ve been. And it can’t be fiddled with (the Bureau of Labor Statistics guards the calculation like gold in Fort Knox).

Deficit hawks in both parties fear if we put off the spending cuts we’ll never do them. But if we cut now, the ratio of deficit to the total economy just gets worse — because the economy stagnates and the swelling ranks of unemployed don’t pay taxes.

So the best of all worlds is to have a big jobs plan now, and also commit to automatic cuts triggered when unemployment falls to 5 percent.

The hawks should find this acceptable. Reasonable Republicans (if any are left) will, too. Democrats, if they still care about jobs, should lead the way.