I watched two days of Fox News coverage of OWS

What is the fair and balanced channel saying about the Occupy movement? Mostly that it\'s gross 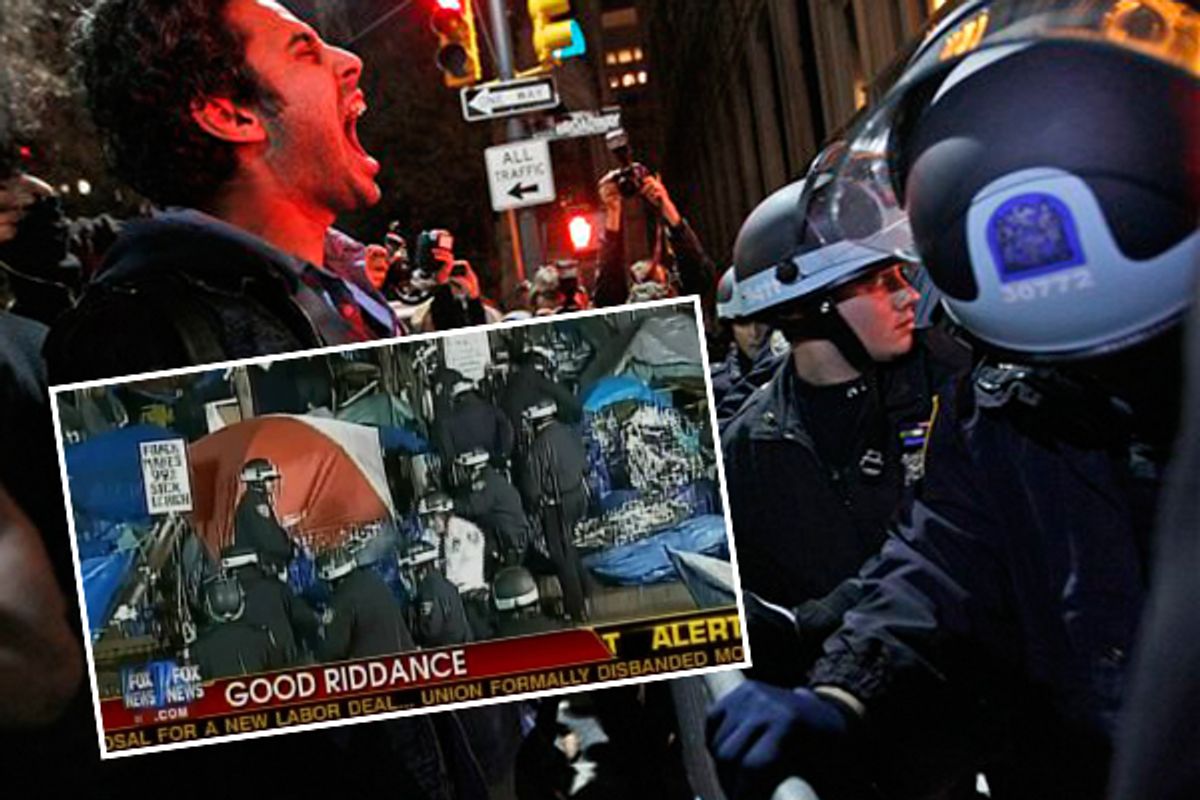 I watched Fox News during the daylight hours for two days this week, to see what the conservative cable shouting channel's "straight news" programs had to say about the Occupy movement. And ... they really don't have much to say about it.

Fox is not normally my background noise of choice. When I'm at home, I have local news channel NY1. At the office, it's usually MSNBC. So watching Fox from 9 a.m. to 7 p.m. for two days was sort of edifying. I learned some things!

For instance, I learned that basically everyone in Congress is demanding that Eric Holder retire because of something to do with Solyndra. Someone on a panel said that the people in Congress demanding Holder's retirement were not very important members of Congress but that person was shouted down because every member of Congress is important, especially when they are providing grist for the Fox faux-scandal mill.

I also learned that there is a baby missing, named Baby Lisa, and that Baby Lisa's mother almost certainly is responsible, because Baby Lisa's mother had an online dating profile. I had literally never heard of Baby Lisa before Monday, but Fox covered Baby Lisa more than any other story save the Penn State situation. The Murdoch tabloid ethos still drives Fox as much as the Ailes political agenda.

And I learned that Megyn Kelly and her child take the subway, which I found slightly hard to believe.

But here's what I learned about Occupy Wall Street and its related movements across the nation: They are gross.

On Monday, most Occupy movement coverage was handled by field correspondent Casey Stegall, a bland, sufficiently handsome local news veteran working out of Fox's Los Angeles bureau. His noon report referenced "the squalor of the camps," used quotes from city and police sources exclusively, and only featured anti-Occupy "man on the street" clips. (One lady was disgusted at the presence of a futon at Occupy Oakland.)

An hour later, Stegall returned for another report hitting the same notes: A "squalid mess," "defecating, urinating, and vomiting all over the plaza," and more clips of citizens grossed out by the dinginess of those squalid hippies in their squalor. Plus: Reports of violence! "Clearly the violence detracts from the message they're trying to send," Stegall said, though "the message they're trying to send" was never once addressed.

Occupy wasn't mentioned again until 3:45, when Shepard Smith had a brief but mostly objective report on Occupy Wall Street from Jonathan Hunt. Shep mentioned that the demonstrations are against "what they call corporate greed." Hunt brought up reports of TB, because "crime and squalor" were clearly Fox's talking points, but Smith's segment was largely fair, if not particularly sympathetic.

Bret Baier's "Special Report" led with a brief attack on Michael Moore for being fat attempting to "profit" off the movement, but then it was back to Baby Lisa.

So in a workday's worth of news, there was not one actual interview with an occupier, or even someone remotely sympathetic to the Occupy movement. There was only one mention of what the Occupy movement is supposed to be about, in fact. The rest was filth and crime.

Much more time was spent dissecting President Obama's ill-considered but essentially harmless statement about how America has become "lazy" about attracting foreign investment. "Obama calls Americans lazy" was the official attack line, and every show devoted at least one full segment to a lengthy discussion of Obama's contempt for America.

On early Tuesday morning, Occupy Wall Street was forcibly evicted by the NYPD in a violent paramilitary raid. Hundreds of protesters and multiple members of the press were arrested. The police used tear gas and, reportedly, an anti-terror "acoustic" weapon. On Tuesday, though, Fox was still much more concerned with former Penn State coach and accused child abuser Jerry Sandusky than with the raid and eviction.

"Fox & Friends" did cheer the raid, putting a very Fox "GOOD RIDDANCE" chyron on footage of police in Zuccotti Park. But I didn't hear more about the raid until 10:10 a.m., when Martha MacCallum teased an upcoming segment: After the break, Steve Forbes would be on to discuss the Occupy Wall Street eviction!

Yes, Steve Forbes, the millionaire media scion and flat-tax advocate. The Forbes segment was only half devoted to OWS, with Forbes offering pearls of wisdom like "I wish they'd go to Washington and start protesting at the Federal Reserve." MacCallum and Forbes agreed that the Federal Housing Administration would also be a worthy target of an occupation, and then they began talking about Herman Cain and Newt Gingrich.

At 11, Julie Banderas did a routine cable news report on the eviction, though at no point was it mentioned that the city and the NYPD were in violation of a court order requiring them to allow protesters and their belongings back into the park until the judge had ruled on the legality of anti-occupation rules. They played video of Michael Bloomberg's statement, and, obviously, did not counter it with any sort of statement from occupiers or their legal representatives.

The same, more or less, an hour later. "This is now a legal issue, and as we get more information we'll pass it on to you."

At 1:00, the vicious Megyn Kelly takes over, and all the news is delivered with an extra dose of sneering. "The party's over," she said of the OWS raid, bringing up "sanitary problems" again, and not mentioning reports of police brutality or the arrests of reporters.

OWS was ignored until, once again, Shepard Smith came on at 3 to actually treat the story with a bit of nuance and objectivity. He led by mentioning the court order the city was ignoring, then went back to Jonathan Hunt, who noted "a marked rise in tensions as we await the judge's ruling." Smith: "Protesters and some journalists, for that matter, are saying cops were heavy-handed here." Hunt, trying very hard not to accuse the NYPD of what they did: "We cannot independently confirm any of that." Though he did note that the police moved all cameras well away from the park.

Smith then hosted an annoying discussion of the legal issues with two Fox lawyers: Arthur Aidala and Randy Zelin. For two New York criminal defense attorneys, they're both markedly pro-NYPD. Zelin in particular was excitedly scaremongering. OWS will "shut down the New York City Criminal Courts system" -- and the city as a whole -- if the judge rules against them, Zelin predicted, repeatedly calling the prospect of civil disobedience "scary." Smith pointed out that widespread civil disobedience "is not a new concept in America." "No, but it's scary nonetheless," Zelin responded. Smith brought up anti-Vietnam protests, and the segment ended with one of the lawyers "joking" that we should send all the protesters to Guantanamo Bay.

The "scary" prospect of widespread action was clearly the late-developing talking point du jour, as 4 p.m. host Neil Cavuto repeatedly seemed almost annoyed that occupiers weren't violently rioting. He kept hyping the prospect of eventual riots, even as nothing of the sort materialized. "This might not go down well," he said. "This might get dicey," he prayed. (He also brought on South Dakota Rep. Kristi Noem, who said she thinks Occupiers should instead be Occupying the White House.)

At 4:18, Cavuto brought on libertarian commentator Andrew Napolitano, a man who is definitely a kook but who is at least a kook with principles beyond naked Republican partisanship. Napolitano declined to criticize OWS at all, instead attacking the city of New York for requiring private corporations to provide public (or semi-public) spaces. He correctly noted that the NYPD and the city were in violation of a court order ordering them to allow protesters in the park, and when Cavuto brought up his much-hoped-for riots ("this could get messy, legal argument notwithstanding"), Napolitano simply said that if the judge ruled against OWS, protesters attempting to Occupy Zuccotti could be charged with contempt of court.

After the judge ruled against allowing OWS to have tents and structures in the park, Cavuto bemoaned the "subdued response so far," as everyone simply refused to riot. "Whether that remains the case, we'll see." Then legal anaylist Mercedes Colwin -- another defense attorney -- said "bravo for the judge," because "it was really all about public safety." (If OWS isn't violent, it is at least still gross.) Cavuto prayed once more for mass arrests, and then it was on to Fox News' "The Five," a panel discussion show so deeply stupid and awful that I cannot bring myself to summarize a single thing anyone said on it.

So after two days of the supposedly "news"-based Fox News programming, I now know that the entire Occupy movement is mostly about their right to vomit and defecate wherever they like. And it threatens to become violent -- deadly violent! -- at literally any moment.

I imagine coverage of this sort -- the "grossness" of the entire thing, with any discussion of the movement's aims or goals entirely absent -- is a large part of what made public opinion of the Occupy movement grow slightly sour.