Washington's occupiers have some fun marching in solidarity with New York 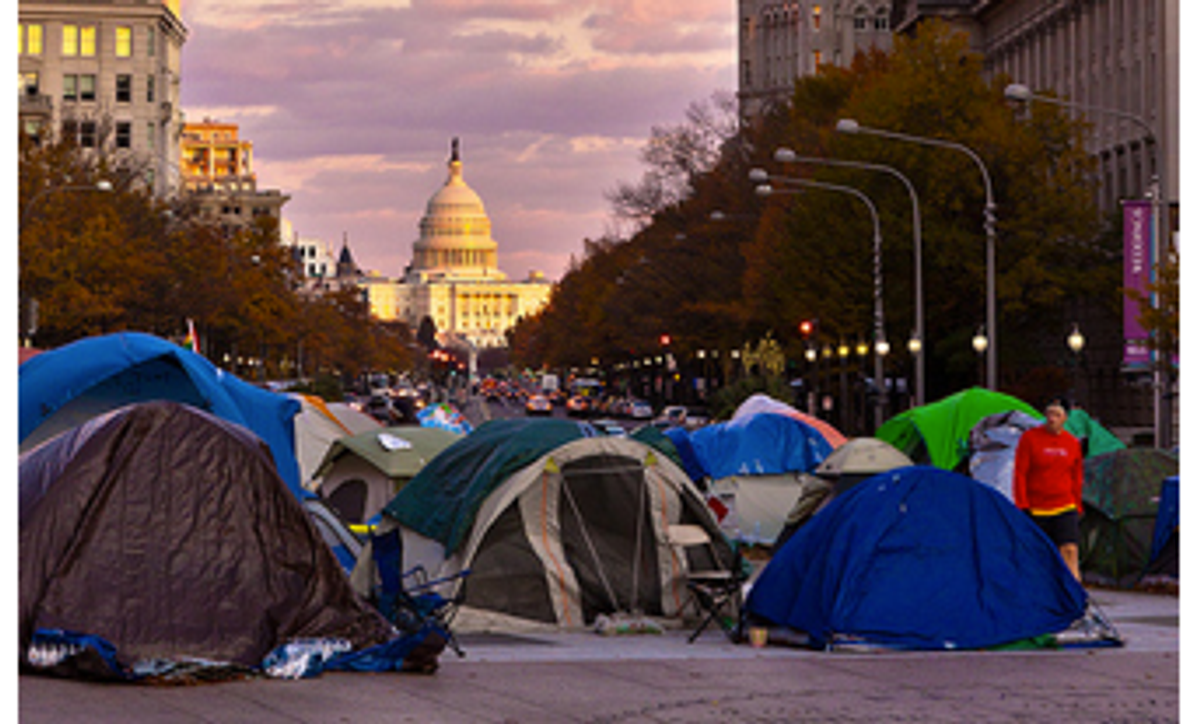 Under the watchful eye of dozens of D.C. police and Secret Service officers, more than 400 boisterous demonstrators from OccupyDC marched through the streets of the nation's capital Tuesday night in solidarity with the now-dispersed protesters of Occupy Wall Street.

Despite the day's dismal events in New York, the mood was upbeat. The chanting was positive('Occupy Wall Street under attack?/What do we do?/Stand up. Fight back") So were the protest signs. ("Tax Fairly," one demanded). And the happy honking of passing taxis confirmed what has been obvious for a month: many of the city's African and south Asian immigrant cab drivers consider themselves part of the 99 percent.

The protesters first marched on the 9th Street offices of the Brookfield Company, which owns Zuccotti Park. Rushing past a couple of outmanned security guards, the crowd briefly took over the building's marble and glass atrium lobby. Ricky Lehner, a 23-year Florida native active in OccupyDC, called for the ritual "mike check," in which the crowd repeats the speaker's every word. The raspy Lehner quoted the company's statement on the eviction in New York.

"Brookfield said today: 'it would have been irresponsible to not request that the city take action. Further, we have a legal obligation to the city and to this neighborhood to keep the park accessible to all who wish to enjoy it, which had become impossible.'"

To the crowd's approval, Lehner offered his own statement:

"What about your legal obligation to follow the constitution?" he shouted. "How can you say it has become impossible to access the park? Everyone who is peaceful is welcome there."

"We are here to request a couple of things from you," Lehner went on.

"To support OccupyWallStreet’s First Amendment rights to freedom of speech and assembly. And to respect those rights and allow the 'occupiers' to stay in Zuccotti Park."

No one from Brookfield was present. Only a couple of irritated security guards actually heard the requests in person. ("This is retarded," one of them told me.) But the crowd, evidently satisfied that the message would eventually reach the right ears, moved on.

After marching through the Chinatown entertainment district, the protesters' next stop was 1620 Eye Street, the anonymous modern of the National Conference of Mayors. The doors were locked tight, so a couple of demonstrators held up a hand-drawn U.S. map marked with all the Occupy Wall Street arrests nationwide. ("3,600 hundred total; 230 today").

A smartly dressed African-American woman named Chi Chi Iwouha stepped forward to read out the names of 18 mayors around the country who have authorized eviction of occupation sites in recent days.

Iwouha, a D.C. native who works as administrative assistant, told me  she had joined OccupyDC  because of "unequally distributed wealth" and an "inhuman criminal justice system."

The night's only moment of tension followed when the crowd surrounded two noisy police motorcycles manned by  impassive cops. The circling crowd was not exactly aggressive but it wasn't entirely friendly either.  One young man, face covered by a bandana, gave the cops the finger while a young woman, obviously sincere, held up a sign saying "We Love You." After the cops gunned their engines a few times, the marchers let them roar past.

From there the crowd shambled to Lafayette Square where they gathered at the fence in front of the White House. With the windows of President Obama's residence shining brightly in the background, the call of "mike check" brought forth another voice from the leaderless crowd, a cheerful 28 year-old black man in dreadlocks who goes by singular name of Seven.

"Now, with all due respect, Mr. President, do we have your full attention?" he shouted at the White House. Then he  lowered his voice to prove his respect: "Because you have ours."

With the crowd repeating each phrase of his improvised speech, Seven invited the president to visit the McPherson Square encampment, located just two blocks away.

"Come see us," he said. "And together we will change the future."

Afterwords, I asked Seven if he had a message for his neighbor, the president.

"That we love him and we support him," he said with a smile that combined admiration and disappointment.  "If he wants to make a better future with us, we are with him."

From there, the crowd returned to McPherson Square, a grassy park along the city's K Street office corridor, now half covered with tents. A group of older people gathered in a circle to solemnly sing the old protest song,  "We shall not be moved." At the same time, two dozen young people took it upon themselves to start dancing the Electric Slide, the capital's eternally popular dance move, right smack in the middle of the intersection of 15th and Eye Streets.

It was a fun loving rebuke to those painfully naïve (or deeply cynical) reporters from the conservative Daily Caller website who regularly descend on McPherson Square bravely seeking to expose the dangerous ways of a movement that is said to support secession from the union, assaulting old ladies, "violence and revolution," and (oh the treachery) ignoring fans of Ron Paul.

"Can you believe the violence of these people?" cried Michael Patterson, a 21 year old Iraq war veteran and OccupyDC mainstay, in mock horror as the dancers did their thing. "They are destroying America. They're dangerous!"

When the annoyed commuters started leaning on their horns, the ever-patient DC cops told the bugaloo brigade to break it up, and the dancers  complied. Laughing and hugging, they retreated to OccupyDC's food tent where they lined up for political chit-chat and a free dinner of shrimp and rice.

Nobody seemed too worried about the police busting up McPherson Square like they did Zuccotti Park. Not tonight. Not yet.