In a gory, porny penultimate chapter, all the sexual perversity of \"Twilight\" comes bubbling through the cracks 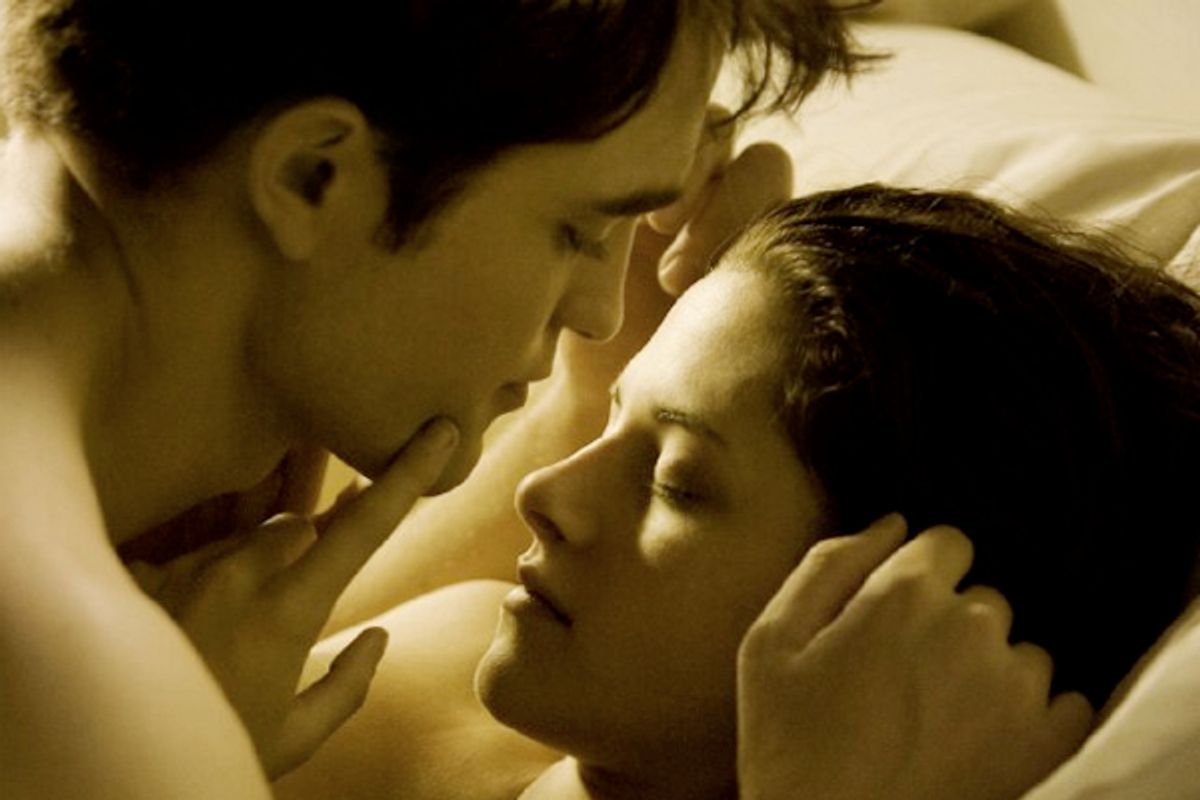 "How badly are you hurt?" murmurs studly but ethereal vampire Edward Cullen (Robert Pattinson) to his human bride, née Bella Swan (Kristen Stewart), on the morning after their wedding night. No no no no -- it's not what you're thinking. Edward's superhuman and indeed inhuman strength has left Bella's arms and torso covered with bruises (and, infamously, has shattered the headboard above their bed). Devotee of the union of Eros and Thanatos that she is, Bella digs it, and wants more. Being a man, albeit an undead one, Edward has second thoughts about the whole thing now that he's gotten what he came for, and spends the rest of their honeymoon on a Brazilian tropical island shying away from Bella, or playing chess with her. Which is a metaphor for, you know, sex or war or something. Or maybe not a metaphor at all but just chess, played by two people who self-evidently don't know how to play, with a strangely large and silly set of chessmen.

Mind you, "it's not what you're thinking" is kind of the situation in general with "The Twilight Saga: Breaking Dawn Part 1," a movie that masks its genuine perversity under layers of artifice and saccharine melodrama. I truly do not mean that as a criticism. To my taste, savvy Hollywood veteran Bill Condon ("Dreamgirls" and "Gods and Monsters") debuts as director of the two-part "Twilight" conclusion in satisfying fashion, delivering a voluptuous if often inert spectacle that splits the difference between high camp and decadent romance. (This opinion may not be widely shared.) We will in fact see Bella bleeding copiously later in the movie -- there's a startling amount of gore, as well as an overripe, nearly pornographic sensuality, to this PG-13 film -- as the direct, if delayed result of her deflowering by Edward. See, he has impregnated her with some kind of succubus-like demon child, which is impervious to the science of humans and vampires alike and poses an intriguing challenge to the pro-life, family-values fantasy universe of "Twilight" author Stephenie Meyer. Does life begin at conception even if it isn't entirely human?

I have other logistical and/or theological questions that "Breaking Dawn Part 1" cannot quite answer. I suppose it makes sense that vampires possess the power to block or distort caller ID, since in one scene Bella calls her pining dad -- the young, single and handsome one played by Billy Burke, whose relationship with Stewart's Bella has always had a Freudian undertow -- from across town, pretending she's in Brazil or Switzerland or something. But Bella and Edward are apparently married by some kind of priest or minister, and I can't get my head around that one at all. Holy matrimony plus undead monstrosity -- does not compute! Either they're not telling the dude any version of the truth (and in that case are also lying to God), or the officiant's got nothing to do with any Christian denomination I've ever heard of, and in either case the whole wedding, rendered in such sugary detail you can almost taste the cake icing, is a hypocritical sham. I could insert a Mormon gag here -- but I'm no bigot! Not gonna go there!

I recognize that as a member of the educated upper middle class, and a man to boot, I'm supposed to feel outraged and horrified by "Twilight" on various levels. I've never seen the point of that. I haven't read Meyer's books and don't intend to, but the Twi-movies so far range from mediocre teen horror to outrageous pulp melodrama, a combo I'm perfectly happy to absorb. This beginning-of-the-end chapter is without doubt the most momentous episode in the saga, and not just because Edward and Bella consummate their relationship (a risky narrative maneuver in any love story). In rapid succession, Bella gives up literally everything: her girlhood, her virginity, her childlessness, her life itself and even her humanity. Rarely have the metaphorical transformations of horror fiction been carried to such rococo extremes. Is this a story about a young woman coming of age or a deviant, heretical Christ legend with a female hero? If you're going to wring your hands and insist plaintively that Meyer intended no such thing and that director Condon and screenwriter Melissa Rosenberg (who has handled an impossible task gracefully) have remained faithful to her vision, I shall nod sagely and say, of course, of course, but no artist or author can ever fully control meaning and interpretation. And that's really going to piss you off.

"Breaking Dawn Part 1" definitely involves less action than the last couple of "Twilight" chapters, and a lot more shots of Bella lying on the couch looking like crap. Taylor Lautner's American Indian-slash-wolf-slash-shape-shifter character, Jacob, spends most of the movie brooding in the shadows, now that he's definitively lost Bella and been thrust in the role of chaste, vulpine protector. (There is a major Jacob-related plot twist late in this movie, as many fans will already know.) But a lot of it is absolutely ravishing to watch, in the manner of eating hot buttered corn with marshmallows and Champagne; a woman sitting next to me at the New York media screening was literally moaning out loud during the wedding sequence. There are some bizarre, Goth-flavored fantasy sequences that are better than anything in the first three films, notably Bella's nightmare version of the wedding, in which everyone she loves is killed. Of course it's Bella herself who will learn not to fear the Reaper, and prepare for her new undead life in "Breaking Dawn Part 2." But not until after Edward sits her down, at long last, and tells her about all the guys he's been with. Some of you think I'm kidding, don't you?