In response to internet rumor, DHS says, "Only in Portland" 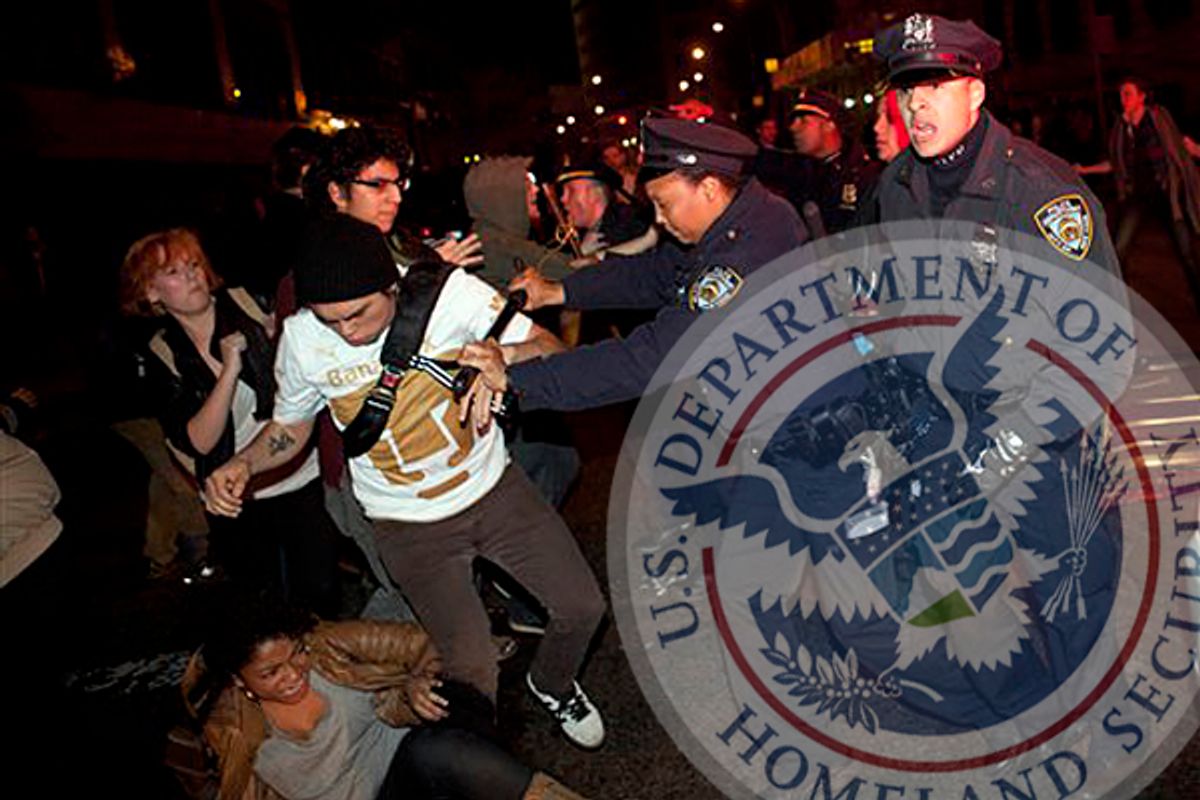 Yesterday, the very funny but not exactly journalistic blog Wonkette posted a story “Surprise, Homeland Security Coordinates #OWS Crackdowns,” linking to a post in the Examiner stating that “according to one Justice official, each of those actions was coordinated with help from Homeland Security, the FBI and other federal police agencies.”

The official, who spoke on background to me late Monday evening, said that while local police agencies had received tactical and planning advice from national agencies, the ultimate decision on how each jurisdiction handles the Occupy protests ultimately rests with local law enforcement.

According to this official, in several recent conference calls and briefings, local police agencies were advised to seek a legal reason to evict residents of tent cities, focusing on zoning laws and existing curfew rules. Agencies were also advised to demonstrate a massive show of police force, including large numbers in riot gear. In particular, the FBI reportedly advised on press relations, with one presentation suggesting that any moves to evict protesters be coordinated for a time when the press was the least likely to be present.

The Examiner story, however, cites just one unnamed Justice Department source -- one or two sources short of non-attributed journalistic certainty. And it appeared in the Examiner: a content-aggregating website that posts “3,000 new stories per day written by more than 55,000 ‘Examiners,’ or paid local contributors.”

Citing the Examiner is the journalistic equivalent of saying, “my friend Bob told me.” And for what it’s worth, DHS rejects the accusation.

"Any decisions on how to handle specifics situations are dealt with by local authorities in that location," Chandler said. "If a protest area is located on federal property and has been deemed unsanitary or unsafe by the General Services Administration or city officials, and they make a decision to evacuate participants, the Federal Protective Service will work with those officials to develop a plan to ensure the security and safety of everyone involved."

This chaotic week of Occupy evictions has created fertile ground for rumors. And though both stories appear to be unsubstantiated, both have now gone viral: 11,000 Facebook shares of the Wonkette article, nearly 8,000 for the Examiner. Democracy Now! host Amy Goodman repeated the rumor on Truthdig, as did libertarian Reason magazine. And so did the progressive In These Times.

What has been documented over the past few days, but received little mainstream media attention, is clear coordination between big city mayors in working to evict Occupy protesters. Mayor Jean Quan let it slip that mayors had been discussing how to deal with Occupy protests on nationwide conference calls. On Tuesday, after initially disputing the account, Philadelphia Mayor Michael Nutter acknowledged that such a call had taken place.

“On Sunday, the mayor was asked at the press conference about whether there was some kind of coordinated thing going on,” Nutter spokesman Mark McDonald told City Paper. “He pointed out that he is the vice chairman of the U.S. Conference of Mayors: he talks with mayors and groups of mayors all the time. They do that on a regular basis. And surely the subject of the Occupy phenomena has come up, and they compare notes. And apparently, on one of these recent calls, toward the end, someone came onto one of these calls and identified herself as Jean Quan. I did not know that, so I’m correcting that for the record.”

The Police Executive Research Forum, according to the Associated Press, has also coordinated inter-city phone calls between police officials to discuss confronting the Occupy movement.