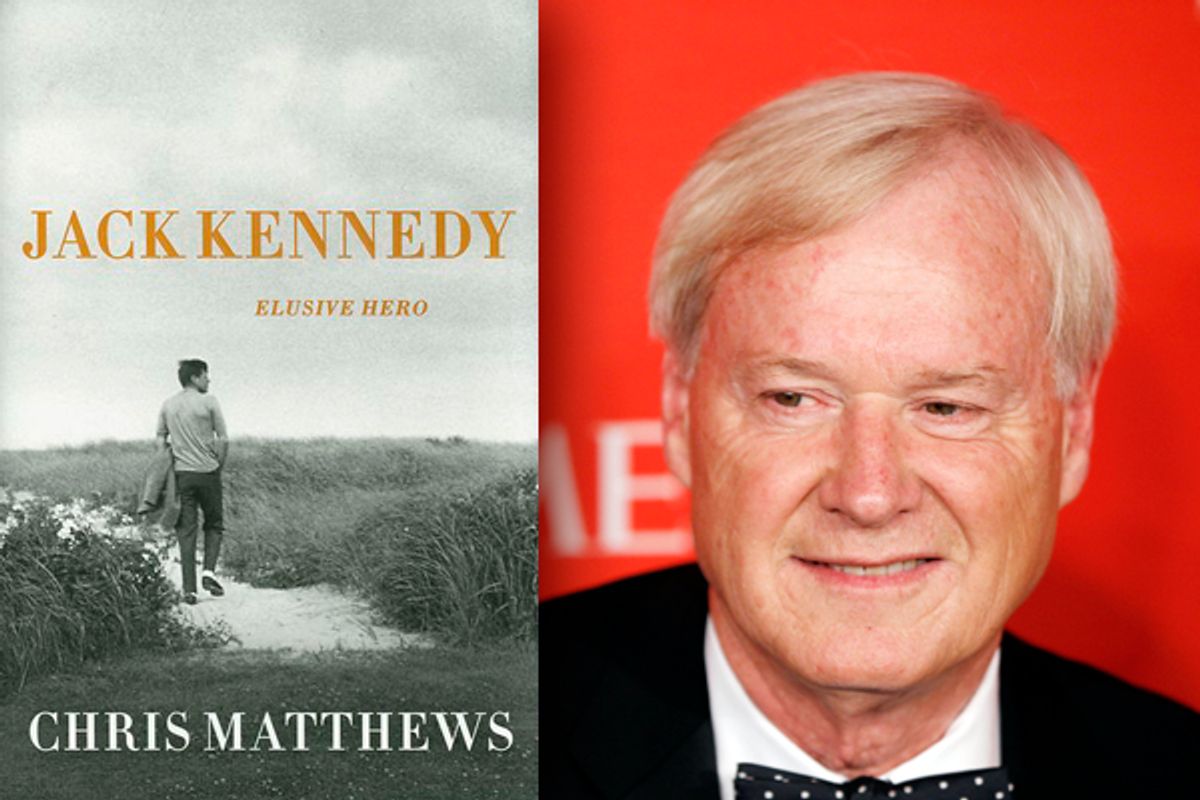 The back of Matthews' "Jack Kennedy: Elusive Hero" features advance praise from historian and frequent "Hardball" guest Doris Kearns Goodwin ("Chris Matthews is a masterful storyteller"); historian, writer and occasional "Hardball" guest Douglas Brinkley ("I give it ten gold stars!"); biographer and Aspen Institute president Walter Isaacson ("an awesome and delightful book"); and frequent MSNBC commentator and batty old aunt Peggy Noonan ("an insightful piece of work and a great time!" italics hers); My favorite blurb of all is from NBC anchor and amateur comedian Brian Williams: "Chris Matthews takes on a giant of American life—and triumphs." So in this book, Chris Matthews ... fights JFK? And beats him?

But blurbs are a necessary evil done out of a sense of professional obligation. Everyone in publishing debases themselves to solicit and write them. It is going above and beyond the call of duty, however, to write glowingly of your friend's book after its publication, for no recompense.

There was Bob Shrum finding in the book an important political lesson for Rick Perry, who, like Richard Nixon, is bad at debates. (Except Nixon was actually good at debates, when he wasn't ill and recovering from surgery, but whatever.)

In Chris Matthews' lyrical new book Jack Kennedy: Elusive Hero — which draws you into the character of that extraordinary man and time so you almost feel you are there — there is a riveting account of the first televised presidential debate in American history.

And we have David Corn, MSNBC political analyst and constant "Hardball" presence, who calls "Jack Kennedy: Elusive Hero" "a graceful and elegiac contemplation of the young president" that is "chock-full of poignant, harrowing, moving, and revealing moments." Plus: "(Interest declared: I work with Matthews at MSNBC, but, still, the book is a damn good read.)"

Howard Fineman, MSNBC contributor and world's blandest political analyst, reports out the news from the book: That JFK got his "ask not" line from ... the headmaster at Choate. (The only problem with this theory is that Ted Sorensen didn't go to Choate.) Because Fineman is merely reporting here, his praise is reserved: "The 'Ask Not' story is one of a series in the book that add new depth and sometimes surprising details to the Kennedy narrative." Plus: "(Full disclosure: This reporter is a regular guest on his two shows, 'Hardball with Chris Matthews' on MSNBC and the syndicated 'Chris Matthews Show.')"

Bloomberg's Jonathan Alter (an MSNBC analyst, natch) has not yet written a full column on the book, but he's on notice for this tweet: "Just had dinner with Chris Matthews. His great book, 'Jack Kennedy,' tells what JFK was really like and how he saved the world in 1962. "

This is how the game works. If you want to be on TV (and everyone wants to be on TV!), you love Chris Matthews' book.