Sitting on a job site, the embattled movement has to make a choice 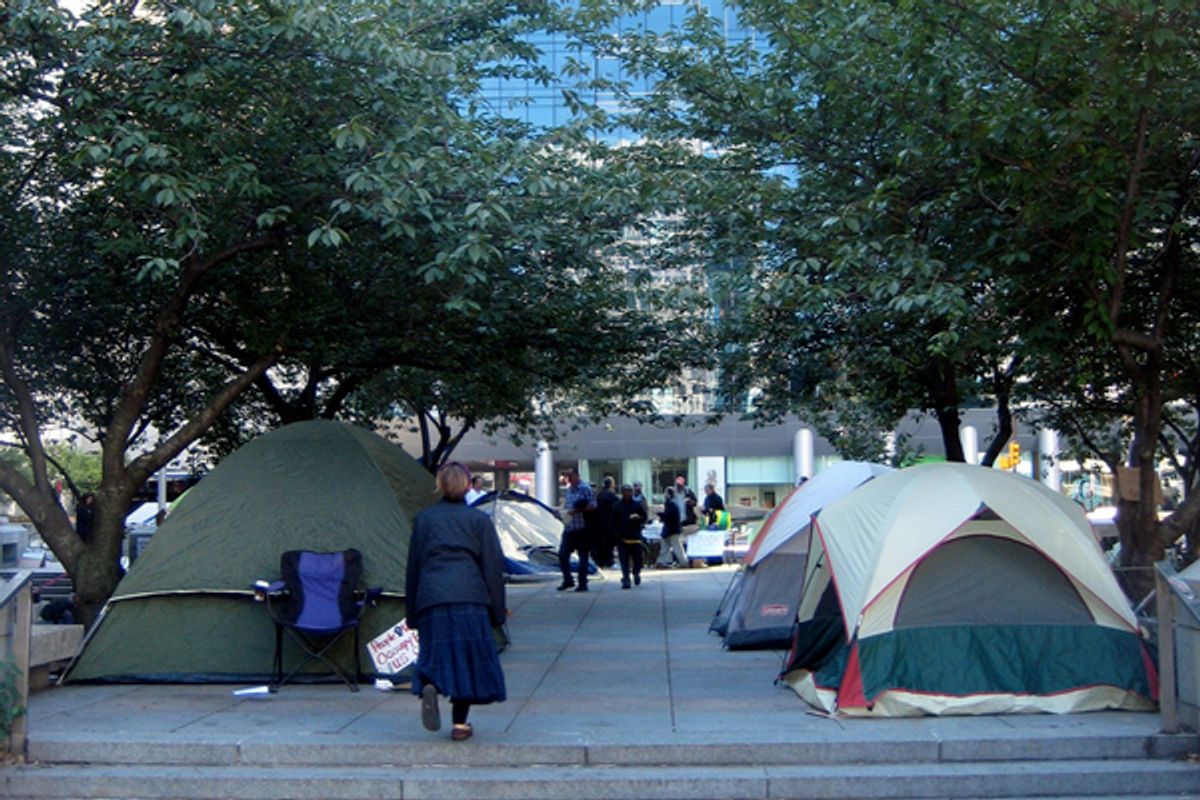 With Occupy Wall Street encampments evicted in New York, Oakland and Portland, Ore., Occupy Philly’s 300-tent protest is one of the largest left standing. But Occupy Philly and Mayor Michael Nutter’s relationship, once a national model of protester-politician amity, has turned sour. And the mayor has signaled that he is prepared to evict protesters.

The conflict pivots about the planned reconstruction of Dilworth Plaza, City Hall’s massive concrete front lawn where protesters are camped out. Protesters voted to stay put last Friday, citing a lack of communication from the mayor about a possible relocation. The mayor held a press conference the next day declaring that protesters must leave, and last night announced that the “project’s commencement is imminent. Accordingly, you should take this opportunity to vacate Dilworth Plaza and remove all of your personal belongings immediately.”

Protesters charge the mayor with orchestrating a media campaign against them in coordination with a nationwide movement to evict Occupy encampments, and say he is attempting to divide the movement between mainstream activists and “radicals.” On Wednesday night, protesters gathered at a general assembly to discuss a situation that seemed to be rapidly spinning out of control.

“It has been an intentional buildup since Saturday,” says Amanda Geraci, a 29-year-old protester. “And it shows the real face of Nutter and the city, because this came right after the election. Our legal collective has been trying repeatedly to communicate and work with the city.”

Media reports and some protesters have framed the conflict around the planned reconstruction of Dilworth Plaza, ancient concrete plaza and subway hub. The federally funded $50 million project is intended to beautify the area and make it accessible to the disabled. Some protesters charge that the project is an urban renewal scheme for the rich, calling a planned ice-skating rink a decadent luxury in a time of crisis. But most protesters have said they have no plans to block the project, which would create many union construction jobs.

Last night, Patrick B. Gillespie of the Philadelphia Building & Construction Trades Council sent letter a letter to Occupy Philly, asking that they relocate.

“As you know, we have been suffering with unemployment numbers between 30-40% over the past two years. Our members are desperate for these jobs.  I know anything you can do to help in changing the venue of the consciousness raising events that have been taking place on the Plaza would be appreciated by our members who will get the job opportunities.”

At last night’s general assembly, members of the legal collective reported back from a meeting with Philadelphia AFL-CIO president Pat Eiding, who said that unions had pledged solidarity with the movement but that protesters needed to relocate to maintain that support. The legal collective also reported back on meetings with staffers for City Councilwomen Maria Quinones-Sanchez and Jannie Blackwell, who said they were prepared to assist protesters.

“They were interested in helping us facilitate a meeting with the mayor or deputy mayor,” says Penelope Waige, a member of the legal collective, “to discuss the questions that the G.A. had that he never got answered in terms of what alternate sites would be available if we moved, and what sort of access we would have to water and electricity if we moved.”

The vote of the general assembly on Friday to remain at Dilworth, says Geraci, resulted from a lack of communication on the city’s part, not protester stubbornness. She says the legal collective sent the mayor a request for information about water and electricity at possible relocation sites on Nov. 7, and received no response.

Managing director Richard Negrin has called the protesters' claims "laughable," saying that the administration has given Occupy "unprecedented access to senior officials ... the mayor left his office with myself and chief of staff Everett Gilison, and walked over to the Friends Center to meet with them under their own terms and conditions. We showed up with half the cabinet, on their terms."

The protesters also accuse the mayor of taking part in a coordinated nationwide effort to evict protesters. After initially denying it, the mayor’s spokesperson conceded that Nutter had discussed Occupy protests on a conference call with other city leaders.

Mayor Nutter also cited an alleged rape this past Saturday in which a suspect was arrested and released; no charges have been filed. The media, following the city’s lead, has focused on fights and unsanitary conditions created by the many homeless people who have set up camp. Philadelphia occupiers, as in encampments nationwide, have struggled to deal with the flood of homeless people who have sought out free food, healthcare and the relative safety of group housing. Indeed, the protesters have been proud to offer services that a fractured welfare state does not.

Nonetheless, Occupy Philly has lost control of a clear narrative -- jobs and justice for the 99 percent -- that buoyed them early on.  And the tone of once friendly local media coverage has flipped quickly. Wednesday's cover of the Philadelphia Daily News, a left-of-center tabloid that ran numerous stories and editorials in support of the encampment, read “Stain on the City: How the homeless hijacked Occupy Philly.”

The general assembly is scheduled to meet at 7 p.m. Thursday to decide whether Occupy Philadelphia will move or not.