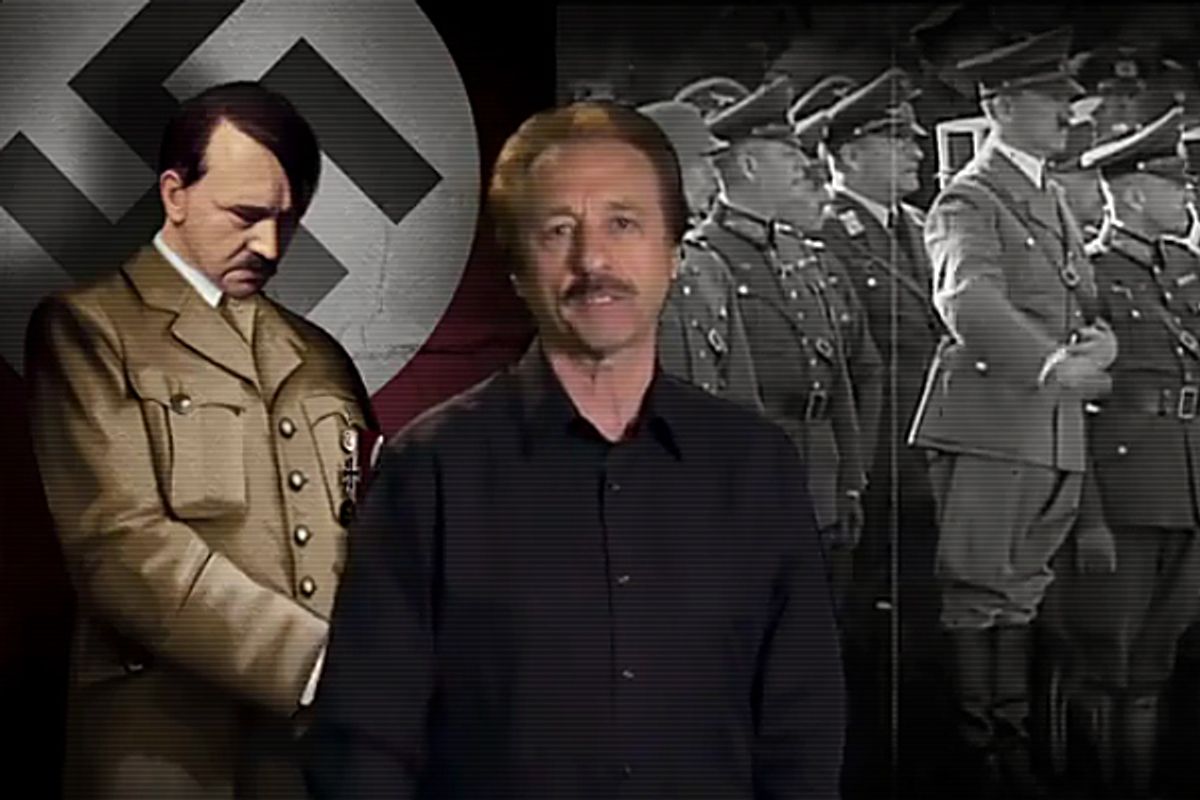 "Saying it's OK to choose is the same thing as saying it's OK for Hitler to choose," says a fresh-faced young man. He's talking about choosing an abortion in "180," a 33-minute movie comparing legalized abortion to the Holocaust that has so far gotten over 1.5 million hits on YouTube, thanks in part to heavy distribution by fertilized-eggs-as-people promulgators Personhood USA.

That's precisely the conclusion Ray Comfort, a mustachioed evangelical pastor and sometime Kirk Cameron collaborator, wants from his eight young interview subjects. And with the help of footage of murdered Jews and fully developed fetuses, it's what he wants his viewers to conclude, as well. The New Zealand-born Comfort, who says his mother is Jewish, is by no means alone in making the equivalence: Mike Huckabee, who supported Personhood USA's failed efforts in Mississippi, has often compared the Holocaust and abortion, saying of Nazi extermination, “educated scientists, sophisticated and cultured people looked the other way because they thought it didn’t touch them." The day before Phil Bryant was elected governor of Mississippi -- at the same time the state's voters rejected the Personhood amendment -- he evoked the Jews of Nazi Germany “being marched into the oven,” because of “the people who were in charge of the government at that time” as an argument to vote for it.

But Anti-Defamation League director and Holocaust survivor Abraham Foxman has called Comfort's film "quite frankly, one of the most offensive and outrageous abuses of the memory of the Holocaust we have seen in years." His statement didn't take an explicit stand on abortion or elaborate on what made the film so unacceptable, but he did say that in addition to making a "moral equivalency between the Holocaust and abortion," the movie "also brings Jews and Jewish history into the discussion and then calls on its viewers to repent and accept Jesus as their savior."

Obviously, for anyone who supports reproductive rights for women, the comparison is wildly offensive beyond any specter of attempted conversion or co-opting of Jewish tragedy. It requires an unquestioning equivalence between living people systematically murdered for their ethnic, religious or sexual identity and an embryo or fetus dependent on a woman's body for survival. It also raises the question of who the alleged exterminators are. Those making the comparison would like people to cast the government or politicians in that role -- but only because it sounds bad to point out who's really making the choice, a woman. And for pro-choicers, reproductive rights are a part of a larger idea of bodily autonomy, which happens to be one of the many things denied to Nazi targets, some of whom were subjected to forced sterilization and abortions or horrific medical experiments.

Comfort starts his film by urgently asking bewildered-looking kids in Southern California if they know who Hitler is ("this guy ... he had a mustache"). He inexplicably interviews an unrepentant neo-Nazi, then starts showing video footage of murdered Jews in extermination camps alongside pictures of fully developed fetuses. Having declared that Hitler hated Christianity, he asks his interviewees whether they would drive a bulldozer across the bodies of Jews, and then whether they would murder Hitler or even his pregnant mother if they had the chance. If this sounds like a suggestion that the murder of abortion providers is justifiable, the credits at the end helpfully say they don't condone violence. In that case!

By the end, Comfort is forcefully telling the teens and 20-somethings that they're blasphemous fornicators, adulterous in their hearts, headed for hell. (He runs into a snag when he demands to know whether one girl has lusted in her heart for a man. "Nope, I'm gay," she says cheerfully.) Interestingly for a film that anti-choicers have declared stunningly persuasive, most of them don't seem to care about where he says they're going.

"180" and its accompanying book may be the most brazen attempt to co-opt the Holocaust for other ends, but it's hardly the first. Even before the Internet codified Godwin's Law -- the longer a discussion gets, the more likely someone will be compared to Hitler -- Nazi Germany has been a favored comparison of just about anyone on the hunt for an undisputed evil. Nor is it just a tactic of the right, though recently it's seemed happiest to use it as a cudgel against enemies, down to private equity king Steven Schwarzman comparing Obama's position on taxes to Hitler invading Poland.

Even Betty Friedan did it: She notoriously wrote in "The Feminist Mystique" that  "the women who 'adjust' as housewives, who grow up wanting to be 'just a housewife,' are in as much danger as the millions who walked to their own death in the concentration camps." But Kirsten Fermaglich, author of "American Dreams and Nazi Nightmares: Early Holocaust Consciousness and Liberal America, 1957-1965," told me that though Friedan later repudiated the comparison, in 1963, when Friedan published her book, the Holocaust was "not a sacred cow. Nobody complained about it. Certainly no one complained about it the way you'd think they would."

Of course, at that point, the Holocaust wasn't even known as the Holocaust. Scholars differ on how and when it shifted as a matter of public consciousness, but Fermaglich suggested it was linked to the growth of identity politics and pride in ethnic heritage in the 1970s -- as well as growing Holocaust denial.

"It’s very hard to separate out one’s personal politics from one’s reaction to the use of the Holocaust," conceded Hasia Diner, a professor of American Jewish History at NYU and director of the Goldstein-Goren Center for American Jewish History. "When it’s being used for something that I agree with, and I respect the speaker, it doesn’t bother me. On the other hand when it’s being invoked for political purposes that I find nefarious and I'm disgusted by the speaker then it seems wrong." A comparison she found appropriate, for example, was the 1951 petition signed by Paul Robeson, W.E.B. DuBois and others charging the United States with genocide, citing lynchings and wrongful executions. "I don’t think Jews have a monopoly on the word," she said.

But as for the anti-abortion activists using the Holocaust, Diner said bluntly, "I have nothing but disgust and contempt for them. Not because they use that word. I think everything about them is horrible."