Pick of the week: The \'80s star dominates a sensational cast in Sam Levinson\'s ruthless comedy \"Another Happy Day\" 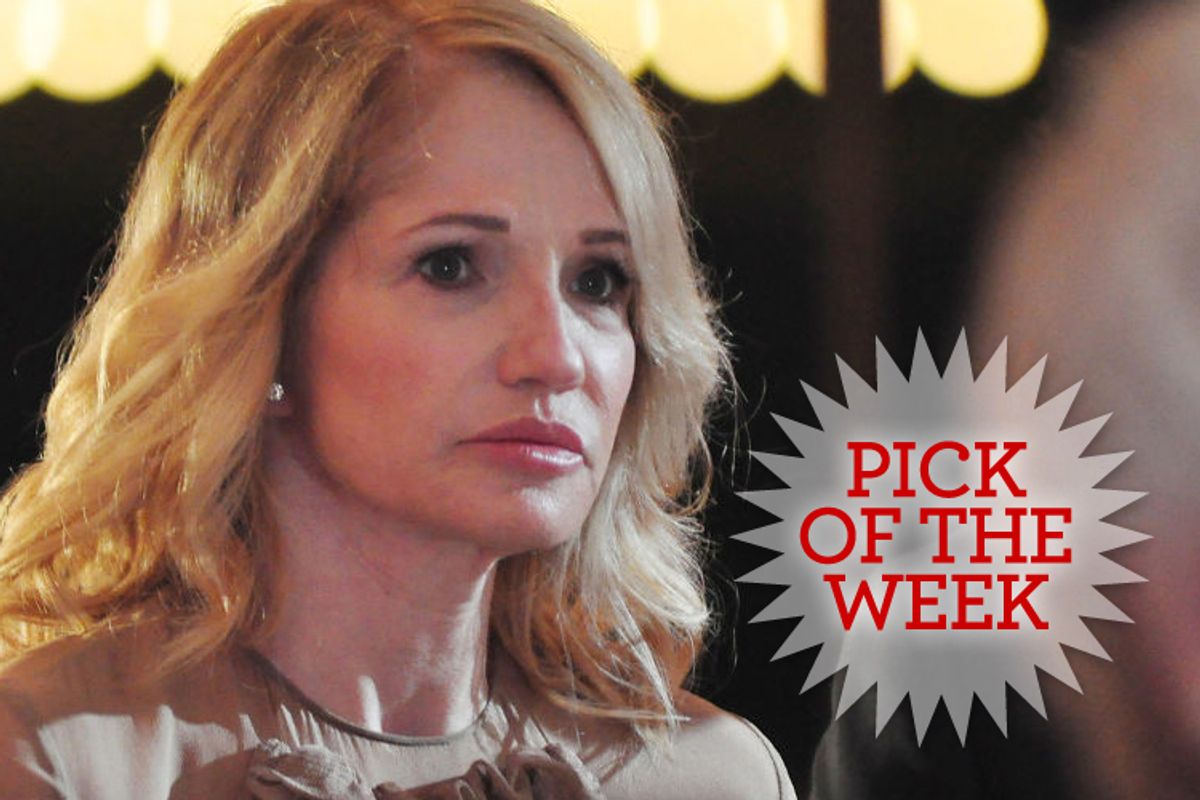 I'm not quite sure why the second and third chapters of showbiz careers can seem so satisfying to watch -- does it suggest that we ourselves may find unexpected success late in life, or is the impulse more altruistic than that? Anyway, there's a whole bunch of high-appeal late-career action in writer-director Sam Levinson's bracing family comedy "Another Happy Day," whose delicious ensemble reaches from Ellen Burstyn and George Kennedy to Demi Moore, Kate Bosworth and Ezra Miller. They're all good, but none of them can outdo Ellen Barkin's blistering, hilarious and compassionate performance as a damaged mom negotiating her screwed-up parents, screwed-up kids and screwed-up self. Levinson's movie is highly enjoyable, if cast in a conventional mold, but I'm fully going on the warpath for Barkin, who has soldiered on through a long period of post-stardom and deserves an Oscar nomination for this role, right now.

Barkin, who's now 55, had a brief run as a sultry but off-kilter leading lady in the '80s, starring opposite Dennis Quaid in "The Big Easy" and Al Pacino in "Sea of Love." But she was too abrasive and distinctive a personality to have a long career as a star, and was always better off in more eccentric material, from Jim Jarmusch's "Down by Law" to John Turturro's "Mac" to "This Boy's Life" and "Fear and Loathing in Las Vegas." The roles have come and gone, in movies good and terrible, but Barkin's never quit working. If you caught her brief appearances in "Ocean's Thirteen" or "Brooklyn's Finest" or "Twelve," none of which will be remembered as great cinema (or remembered at all), you saw her command the screen, chew up everyone in sight and then depart. Recently Barkin has emerged as the auteur of an outrageously entertaining, macho-chick Twitter account, where she posts links to left-wing screeds, openly leches after various male celebs and curses like a hip-hop generation sailor. (Recently, before retiring for the night: "Ok Ima get in my PMFJs.") You gotta love this lady, although I definitely don't want to get her mad. (I hope she never read the review I wrote of "Siesta" for some alternative paper, way back when.)

In "Another Happy Day" -- yeah, the title is a little ham-fisted, maybe -- Barkin plays Lynn, a twice-married mom with an exceptionally complicated family history who's driving her two sons from Michigan to Maryland for a wedding. Her teen son, Elliot (the excellent Ezra Miller), is an unregenerate drug fiend who prowls the house at night in search of Fentanyl, Adderall, weed, unattended bottles of booze or anything else that might provoke a buzz. Her pudgy younger son, Ben (Daniel Yelsky), has been diagnosed with "mild Asperger's" -- I don't believe any clinician would put it that way, but never mind -- which leads to some family debate about whether he counts as autistic or a "retard." (Answers: Yes and no.) Lynn actually has another son named Dylan (Michael Nardelli), the one who's getting married, but she barely knows him, since he grew up with his stoical father, Paul (Thomas Haden Church), and a trashy, overly possessive stepmom named Patty (Moore, the soon-to-be-ex-Mrs. Ashton Kutcher, enjoying herself to the hilt), who may possibly have been a "stripper and coke whore" in the somewhat distant past.

I gather some viewers find "Another Happy Day" too mean-spirited and hyperactive, but I'm profoundly grateful that Levinson doesn't go easy on these characters, or let them go easy on themselves. Lynn is under no illusions that she was a terrific mother, or that she's an exceptionally stable person. When she confronts Paul about a painful episode from their past, she admits she can't be quite sure that the physical abuse she remembers actually happened. Lynn has little dignity but tremendous pride, and she loves her children with an almost animal ferocity. I was rooting for her all the way, while being glad she wasn't my mom or daughter or sister or ex-wife. Lynn is matched punch for punch by Ellen Burstyn in a terrifying gray bouffant as Doris, her imperious and manipulative mother, who's able to make an offhand comment to someone else on the phone into an underhanded assault. George Kennedy plays Doris' fading, lawn-obsessed husband, Joe, and it's great to see the legendary tough guy back on-screen at age 86. In the tradition of his dad, Barry, Levinson gets terrific comic bits from other cast members, especially Siobhan Fallon Hogan, Diana Scarwid and Eamon O'Rourke.

Yeah, that's right -- this is the directing debut of Barry Levinson's kid, which explains certain things elegantly, including perhaps the quality of the casting and the presence of Barkin, who serves as a producer here and of course acted in the senior Levinson's first film, "Diner," almost 30 years ago. It also helps illuminate the fact that, like so many other American comedies, "Another Happy Day" feels like a Jewish family story that's been partially uprooted and rendered ethnically nonspecific. But snark away however you like; the unavoidable fact is that the younger Levinson has considerable storytelling talent, an admirable honesty and a streak of ruthlessness. Almost every movie in this genre offers some kind of cornpone comic redemption at the end. "Another Happy Day" identifies passionately with its damaged but fearless heroine, who's doing the best she can in a thoroughly dysfunctional situation, but has no idea whether the future will be any better than the past.

"Another Happy Day" opens this week in New York and Los Angeles, with wider release to follow.