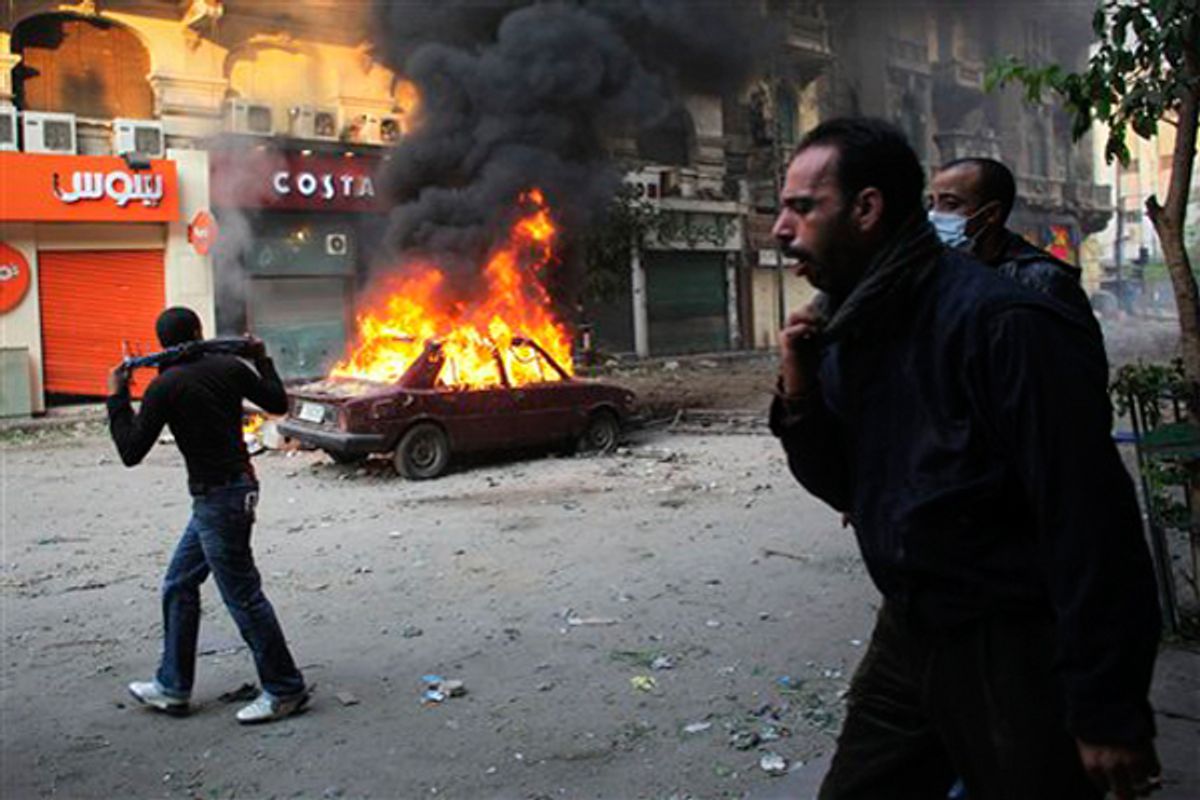 Protesters move away from tear gas fired by Egyptian riot police during clashes near Tahrir Square in Cairo on Monday. (AP/Tara Todras-Whitehill)
--

CAIRO -- The military-appointed cabinet of the Egyptian government submitted letters of resignation late Monday night after three days of demonstrations rocked downtown Cairo and claimed nearly 40 lives. Just a week before Egypt’s planned parliamentary elections, the real political battle is being fought on the streets of Cairo while the military government and nascent political parties play catch-up.

The tumult began last Friday when thousands of peaceful protesters marched in Tahrir Square to condemn a constitutional proposal which would place the Supreme Council of the Armed Forces (SCAF) beyond civilian control.  On Saturday afternoon, military police then cleared the square of demonstrators using tear gas but the crowds soon returned, forcing the security personnel out.  Ever since, protesters and police have been playing an ever-escalating game of cat-and-mouse through the downtown streets.

Late Monday night in Tahrir, exuberant crowds chanted,  “The people want the downfall of the Field Marshall” (Field Marshal Mohamed Tantawi has been the nominal head of state for the last  nine months). A diverse collection of demonstrators, including children and families, gathered in the square while young men battled riot police on side streets.

As I watched these pitched battles rage,  young activists gathered around me,  eager to explain their reasons for taking to the streets. “We have had enough of the military,” 18-year-old Hady told me. Walid, 23, said this is the first time he’s felt optimistic since “we kicked out Mubarak.”

The last three days have seen a revival of the grass-roots street protest movement that swiftly toppled the 30-year dictatorship of Hosni Mubarak last spring.  The demonstrations come after months of haggling between the military government and the political parties about the details of the transition to democracy.

Although the military has feigned interest in sharing power with civilians, it refuses to budge on key issues, including the persistence of Emergency Laws and the proliferation of military trials for civilians. As a result, many in Tahrir have lost faith in the political class’s ability to negotiate effectively with the military.

“We have come here to complete the revolution,“  said Ahmad Salah a left-wing activist who has been in Tahrir since Saturday afternoon.

Of course, the political parties, seeking to compete in next week’s election, are following events closely and are doing their best to not alienate anyone.

Dr. Amr Derrag, a leader of the Muslim Brotherhood’s political wing in the metropolitan neighborhood of Giza, told me that protesters “may be considered justified in the face of  police brutality,” but stopped short  of endorsing the protests or calling for the military’s immediate removal.

In their official statements, the Brotherhood both condemned the violence and called for stability.  Brotherhood leaders are still insisting that elections proceed as scheduled.  Though individual Brotherhood members  are present in Tahrir Square, the organization has promised to not participate in any  demonstrations that “lead to confrontations.”

The resignation of the cabinet was viewed by many in the crowd as a cosmetic concession.  It is well known the cabinet has little real power and that, since the removal of Hosni Mubarak last spring, the SCAF has been calling the shots.

“It is not enough, ” Shahir Ishak, one of the co-founders of the Freedom Egypt Party and himself a candidate for parliament, told me in Tahrir Square.  “The protesters expect more than just the cabinet submitting their resignation. People cannot leave the square without a clear statement for a proper transition.”

It is unclear what an acceptable transition would look like, but Ishak still has faith in next week’s elections. “We have to have elections immediately,” he told me. Without elections, there will be no viable alternative to the SCAF.

By midnight in Cairo, a wary calm had settled in Tahrir Square. There are rumors that the SCAF is trying to negotiate with a coalition of political parties, and some are saying that Nobel laureate Mohamed ElBaradei is trying to form a national “salvation government. ” For now, though, most are focusing on holding the square for another day.