The Wall Street Journal publishes nonsense from Doug Schoen and Pat Caddell, because they think you're an idiot 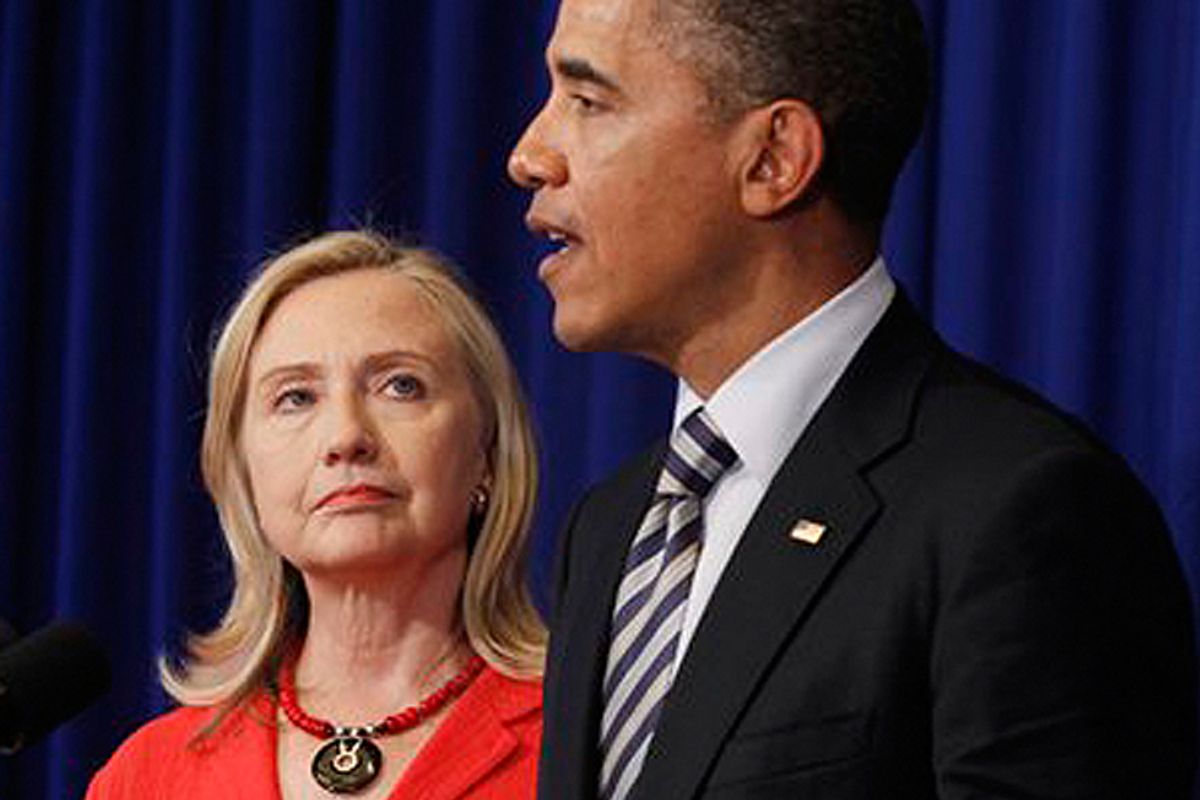 Caddell and Schoen, two loser "Democratic" "pollsters," regularly publish very lame link-bait columns about how if Democrats want to succeed electorally, they must immediately cease being Democrats, and become, instead, Republicans. This week's variation on that theme: Barack Obama should step aside (already heard that one last year around this time) and allow himself to be replaced by Hillary Clinton, for the good of the party and the nation.

Even though Mrs. Clinton has expressed no interest in running, and we have no information to suggest that she is running any sort of stealth campaign, it is clear that she commands majority support throughout the country.

Because she's not running for anything.

So Hillary Clinton should be president instead of Barack Obama, because Obama is too partisan and divisive. America needs a bipartisan plan to attack the deficit and also create jobs, and it is Obama's fault that that is a vague, magical fairy tale. Hillary Clinton will make this fairy tale real, thanks to the fact that, as we all know, Republicans love cheerfully working with the Clintons for the good of the nation. When a Clinton's in the White House, partisan politics are always put aside!

This is self-evidently dumb on about ten different levels -- Clinton won't run, President Clinton wouldn't have any more success negotiating with Congressional Republicans than President Obama, Clinton's popularity is a result of her not being a partisan candidate for office anymore, if there was such a thing as a "bipartisan" plan to reduce the deficit while also stimulating job growth (and protecting entitlements!) we'd presumably have already decided to act on this fantastical plan, everything resembling such a plan is explicitly supported by the White House and rejected by Republicans, Republicans would not endorse said plans if President Obama promised to go away because then they'd simply want to wait for a Republican to take over for him, and Pat Caddell and Doug Schoen are not, as they claim to be, Democrats -- but the Journal published this regardless, as they always do with fresh tripe from Schoen and Caddell.

Schoen -- who works for hypothetical future independent presidential candidate Michael Bloomberg, though that fact is never, ever disclosed -- is a simple hack, precisely as dumb and unprincipled as you'd expect anyone who was once Mark Penn's right-hand man to be. Caddell angrily left the Democratic party 20 years ago, which is seldom mentioned when he's trotted out to trash the president on behalf of the right-wing media outlets that pay his rent. But the fact that they're classic "Fox Democrats" matters much less than the fact that all of their editorials are predictable, wrong, and patently stupid.

As I said, printing their editorials is an implicit admission that you think your audience is credulous and moronic. The people in charge of the Wall Street Journal are savvy enough about politics to know that all of this is bilge and bullshit. They know both that this will never happen and that it'd be a stupid suggestion even if it were within the realm of possibility. They just don't care. They don't care that they're printing garbage, because they figure garbage will get some traffic from those engaged in the same game.

If I were a conservative American I'd be less outraged at the specter of liberal elites hypothetically disrespecting me from their coastal enclaves and much more pissed off that the people on my side are constantly peddling this bullshit.